Colin Harry Appleton (7 March 1936 – 31 May 2021) was an English footballer and manager. He was captain of the celebrated Leicester side nicknamed the "ice kings" which chased the double in 1962–63 and he also captained the club to their first ever major honour, winning the 1964 League Cup.

He later played for Charlton Athletic and Barrow, before playing for and managing Scarborough. He went on to manage Hull City, Swansea City, Exeter City and Bridlington Town.

Appleton began his career as a youngster with his hometown club of Scarborough before joining Leicester City in March 1954, just days after his 18th birthday, after being recommended to manager Norman Bullock by then Scarborough manager and former Leicester player Reg Halton. He made his first team debut just six months later against Manchester City, though he made just five senior appearances over the next two years as he tried to balance his football schedule with his national service.

However, in the 1956–57 season he began to see more first team action, helping Leicester on their to the Second Division title. However, it was not until the appointment of Matt Gillies in November 1958 until Appleton's career at Leicester really began to blossom. Under Gillies, Appleton made the number 6 shirt his own and forged a fearsome half-back line partnership with Frank McLintock and Ian King. [2]

He helped Leicester reach the 1961 FA Cup Final against Tottenham Hotspur, managed by fellow 'Scarborian' Bill Nicholson. The Spurs side also contained Malton-born Terry Dyson. Gillies made him club captain soon after, which saw him captain one of the most celebrated sides in the club's history as Leicester chased the double in 1962–63. Though it would eventually amount to nothing as Leicester eventually collapsed at the end of the league season and ended up finishing in a disappointing 4th position, the club then lost 3–1 to Manchester United in the FA Cup final.

However Appleton did captain Leicester to their first ever major trophy, winning the 1964 League Cup and also scored in the first leg of the 1965 League Cup final, as they reached the competition's final for the second consecutive season, however he could not prevent his team losing to Chelsea, going down 3–2 on aggregate.

He was awarded a testimonial at Leicester in 1964 in recognition of his services to the club and moved on to Charlton Athletic two years later after 12 years with the club. [3]

A season long spell at Charlton, which included a brief reunion with Ian King, was followed by a two-year spell as player-manager of Barrow, before rejoining his hometown team of Scarborough in 1969 as player/manager.

Appleton helped guide the club to victory in the FA Trophy, including scoring the winning goal in the semi-final to see the club reach the final, also being named the club's player of the season in what would turn out to be his final as a player. He was named the club's permanent manager two years later and led them to a further two FA Trophy triumphs. Making his three FA Trophy successes a record at the time.

Swansea City managed to entice him away from Hull City, though Appleton won just four of his 18 games in charge of the Swans and was sacked after just six months in charge. Appleton then had a two-year spell in charge of Exeter City before a brief and unsuccessful return to Hull City before officially retiring from the game. [2] He had failed to win the respect of his players at Hull, and the 'big characters' at the club joked around at his expense, whilst on the pitch the club slid to bottom of the Second Division. [4]

Francis McLintock MBE is a former Scotland international footballer and football manager. He also worked as a sports agent and football pundit in his later life.

Bryan Hughes is an English former professional footballer who played as a midfielder from 1994 to 2015.

Whitby Town Football Club is an English football club based in Whitby, North Yorkshire. The club participates in the Northern Premier League, the seventh tier of English football. Founded in 1880, Whitby are one of the oldest clubs from the North Riding of Yorkshire, the club has spent their entire history in the amateur and semi-professional leagues, though they have reached the second round of the FA Cup in both 1983–84 and 1985–86.

This is the history of Leicester City Football Club, based in Leicester, England, the United Kingdom. Having been founded over 100 years ago, for the first time, in the 2015–16 season, Leicester City won the Premier League, with Claudio Ranieri being the manager. Also, in the same season, the team qualified for the UEFA Champions League. 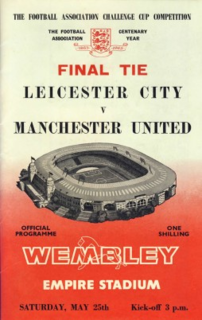 This article covers the history of the Scarborough Football Club from the 1870s to 1998.

Fergie's Fledglings were a group of football players recruited by Manchester United under the management of Sir Alex Ferguson and trained by assistant coaches Brian Kidd and Eric Harrison, before eventually progressing to the first team during the 1990s.

The 1962–63 season was Leicester City's 58th season in the Football League and their 20th (non-consecutive) season in the first tier of English football. Under the management of Matt Gillies and starring players Gordon Banks, Frank McLintock and Dave Gibson, Leicester sensationally chased the double. After losing 3–1 to Manchester United in the FA Cup Final and gaining just one win from their final nine league games their double challenge collapsed and the Foxes eventually finished in a disappointing fourth position in the league.