Collyhurst is an inner city area of Manchester, England, 1.5 miles (2.4 km) northeast of the city centre on Rochdale Road (A664) and Oldham Road (A62), bounded by Smedley, Harpurhey and Monsall to the north, Miles Platting to the east, Ancoats to the south, and the River Irk to the west. Prominent buildings include two Roman Catholic churches, St Patrick's and St Malachy's.

Much of the red sandstone used for building in Manchester and the surrounding area, including stone for the Roman fort at Castlefield, St Ann's Church in the city centre, Manchester Cathedral and the original buildings of Chetham's Hospital, came from Collyhurst Quarry. [1] Geologists use the term Collyhurst Sandstone for this type of soft red sandstone, which occurs in North West England. [2] It is a fine to medium grained sedimentary rock, created from desert sands blown into dune formations during the Early Permian period when the area which now constitutes the British Isles was within the desert belts to the north of the equator. The rock is not very resistant to weathering and erosion and disintegrates relatively quickly. The quarry was mentioned by John Leland in the description of Manchester in his book. The Itinerary of John Leland in or about the years 1535 to 1543, saying that there was " a goodly quarre hard by the towne". [3] Stone was transported the short distance into Manchester by river on barges or rafts. [1] The quarry is disused and the area around it has been turned into a park called "Sandhills" [4] as part of Manchester City Council's Irk Valley Project. [5] [6]

There are now two Roman Catholic churches in Collyhurst, St Patrick's and St Malachy's. There was once also St Edmund's in Monsall Street (architect P.P. Pugin, 1894). The three former Anglican churches have been demolished since they were described by Nikolaus Pevsner in The Buildings of England; Lancashire; I, 1969. The oldest was St Oswald's on Rochdale Road in the Gothic of the 13th century, the architect was E.H. Shellard; the east end was spectacularly picturesque and there was a steeple designed by John Lowe. Lowe was also the architect of the two other churches, the Albert Memorial Church in Queen's Road, 1864, a red brick building with a northwest tower topped by a spire; and St James's in Teignmouth Street, 1874 (this had a steeple at the northwest corner, a porch on the southwest, and a polygonal apse). The Union Chapel, Queen's Park, was designed by R. Moffat Smith and has a low turreted tower. [7]

In 1972, all the C of E churches in Collyhurst and Monsall were amalgamated into a new benefice of the Church of the Saviour. The church was established on part of the site formerly occupied by St Oswald's Church on Rochdale Road. This is an evangelical Church of England church.

There is a war memorial on Rochdale Road next to the former site of the Collyhurst Flats, erected by public subscription and unveiled by the Rt. Hon. Earl of Derby KG (Secretary of State for War) on 23 May 1923 to commemorate British servicemen who died during the First World War. [8]

Collyhurst Hall was once home to the Mosley family, lords of the manor of Manchester until 1846. There had been a hall on the site since at least 1649, but Collyhurst Hall had been demolished by the end of the 19th century to make way for a development of terraced houses, themselves demolished in the 1960s. What remains of the hall is buried beneath a playing field on the corner of Rochdale Road and Collyhurst Street. [9] [10]

Archaeologists from the University of Salford and Manchester Communication Academy, together with volunteers, local residents and school children, undertook an excavation of the site in 2016. [9] The project was supported by Collyhurst Big Local, Manchester City Council, Tameside Archaeology Society and Manchester Museum. [10]

Collyhurst Youth JFC was established in 2018 by a group of local people to bring football back to the area. They currently have around 80 children on their books and are based at Manchester Communication Academy School. Their badge is based on the old monument on Rochdale Rd and the new Sandhills Gate.

For a brief period in the mid-1970s, The Electric Circus, a run-down venue on Collyhurst Street, formerly the Palladium variety club, found itself at the centre of Manchester's punk rock scene. It played host to bands such as the Sex Pistols, The Jam, Joy Division, then known as Warsaw, [11] Buzzcocks, Slaughter and the Dogs and The Clash's "White Riot" tour before its closure in 1977. It has since been demolished. Lesser unknown bands have also come from the backstreets of Collyhurst notably; The Young offenders Institute, Hoffa, Overcast, Morning Afterglow, M-40 and Ablekaned.

Collyhurst is served by buses on the Rochdale Road corridor.

Transport for Greater Manchester have proposed a new tram stop at Sandhills which would serve Collyhurst.

On 15 August 1953, the front coach of a Manchester to Bury electric train fell from the Collyhurst viaduct over the River Irk after colliding with a local steam train. Ten people were killed and 58 injured in what became known as the Irk Valley Junction rail crash. [12] 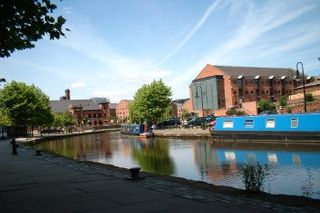 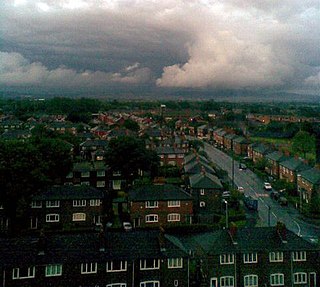 Newton Heath is an area of Manchester, England, 2.8 miles (4.5 km) north-east of Manchester city centre and with a population of 9,883.

Middleton is a town in the Metropolitan Borough of Rochdale, Greater Manchester, England, on the River Irk 5 miles (8.0 km) southwest of Rochdale and 4.4 miles (7.1 km) northeast of Manchester city centre. Middleton had a population of 42,972 at the 2011 Census. It lies on the northern edge of Manchester, with Blackley to the south and Moston to the south east. 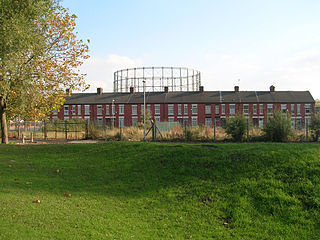 Miles Platting is an inner city part of Manchester, England, 1.4 miles (2.3 km) northeast of Manchester city centre along the Rochdale Canal and A62 road, bounded by Monsall to the north, Collyhurst to the west, Newton Heath to the east, and Bradford, Holt Town and Ancoats to the south.

Harpurhey is an inner-city area of Manchester in North West England, three miles north east of the city centre. Historically in Lancashire, the population at the 2011 census was 17,652. 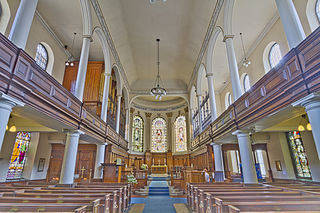 Moston is a district of Manchester, in North West England, approximately 3 miles (4.8 km) north-east of the city centre. Historically in Lancashire, Moston is a predominantly residential area, with a population of 14,518 at the 2011 census and an area of approximately 1,300 acres (5.3 km2). 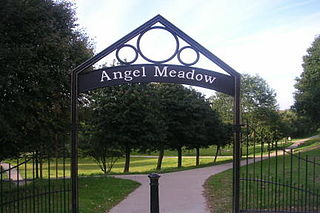 St Michael's Flags and Angel Meadow Park is a public park in Manchester, England, to the immediate northeast of the city centre, on a slope between the River Irk and Rochdale Road. It occupies an area of 7.4 acres (3 ha), and was once an affluent suburb, until the 19th-century Industrial Revolution altered the social standing of the area and introduced poverty and disease. Regeneration of the park in the 2000s has created a gateway into the Irk Valley. 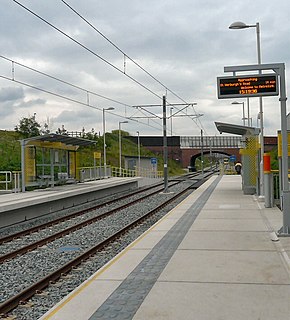 Monsall is a tram stop on the Oldham and Rochdale Line (ORL) of Greater Manchester's light-rail Metrolink system in the Monsall area of Manchester in North West England. It was built as part of Phase 3a of the system's expansion, on the route of the former Oldham Loop Line, and opened to passengers on 13 June 2012. 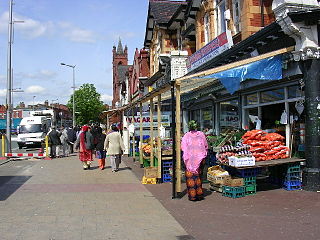 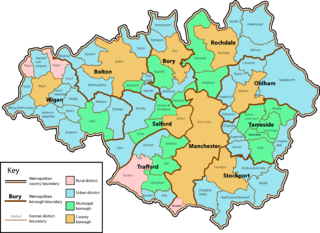 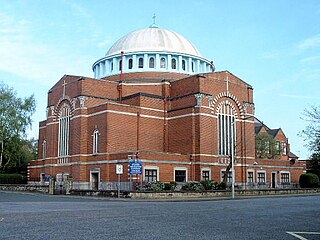 St John the Baptist Church is a Roman Catholic Parish church in Rochdale, Greater Manchester, England. It was founded in 1830, and built in 1927. It is situated on the corner of Maclure Road and Dowling Street, opposite the Greater Manchester Fire Service Museum in the centre of the town. It was built in the Byzantine Revival style and is a Grade II* listed building.

Moston Brook is a stream in Greater Manchester in north-west England and a tributary of the River Irk. The brook is formed at the confluence of Bower Brook and Hole Bottom Brook. This occurs near the Rochdale Canal in Failsworth in the Metropolitan Borough of Oldham. It flows southwest, forming the border between Moston, Manchester and Failsworth before being culverted almost all of the remaining route to its meeting the River Irk. It has a total length of about 3.7 miles.