The Colomi bus crash took place on 2 March 2021, when a bus traveling along Route 7 between the departments of Cochabamba and Santa Cruz, fell into an abyss, [1] the accident caused 21 deaths [2] [3] and 17 injuries. [4] The bus was carrying students from the Universidad Pública de El Alto, which had suffered another tragedy that same day, when a balcony collapsed at the college during a protest.

The accident took place at kilometer 72 of Route 7, the precipice where the tragedy happened was 150 meters. [1] The incident took place at 1 in the morning, [4] [1] in the area of Cañadón [4] in Colomi, near Ivirgarzama. [5] Trans Carrasco was the company that owned the bus. [5]

The Bolivian Air Force was the one that came to rescue the dead and wounded, the Bolivian National Police also came to provide support. [5] The wounded were transferred to health centers in Colomi, Sacaba and Cochabamba. [5] Colonel Helsner Torrico Valdez of the Bolivian police reported that 20 people have died and approximately 13 injured people have to mourn. [1] Among the survivors was Bolivian aviation technician Erwin Tumiri, who in 2016 also survived LaMia Flight 2933. [2] [3] Later the government forces identified that there were 45 passengers, and the number of deaths rose to 21.1 2 and the number of wounded to 17. [4]

The Valencia Metro derailment occurred in Valencia, Spain's third largest city, on 3 July 2006 at 1 p.m. CEST between Jesús and Plaça d'Espanya stations on the Line 1 of the Metrovalencia mass transit system. At least 43 people were killed and more than ten were seriously injured.

Río Amazonas Airport is an airport serving Shell Mera, a town in the Pastaza Province of Ecuador. The airport was established in 1937 by Royal Dutch Shell and abandoned in 1948. In 1949 the Mission Aviation Fellowship, a Christian missionary group, established themselves in the area and used the airport as their main base.

This is a timeline of events related to the Colombian armed conflict.

The Altamira prison brawl was a deadly fight that occurred on 4 January 2012 in Altamira, Tamaulipas, Mexico. Officials from the state of Tamaulipas confirmed that 31 people were killed, with another thirteen injured. The fight started after a drug gang burst into a section of the prison where they were banned from, attacking their rival gang housed there, triggering the fight. During the altercation, the inmates used several kinds of cold weapons (non-firearms) to kill their opponents. The prisoners also used sticks and knives to massacre the members of the rival gang.

The 2012 Buenos Aires rail disaster, also known as the Once Tragedy, occurred on 22 February 2012, when a train crashed at Once Station in the Balvanera neighbourhood of Buenos Aires, Argentina.

The 2008 Villa Canales bus disaster occurred in the municipality of Villa Canales, Guatemala on 29 February 2008, at 19:15 local time. A passenger bus from Transportes Cubanita, with 79 people on board, crashed into a 10-meter ravine after missing a sharp bend in the road connecting Villa Canales to Barberena. 54 people died and another 25 were wounded in the accident.

The Tomé Tragedy was the worst fans bus disaster in the history of Chilean football. The tragedy affected the O'Higgins fans after a 2013 Torneo Transición match versus Huachipato in Talcahuano, where in the Cuesta Caracol, the bus fell into a ravine about 100 meters. A bus of the public transport of Rancagua Trans O'Higgins was the vehicle that suffered the accident.

LaMia Flight 2933 was a charter flight of an Avro RJ85, operated by LaMia, that on 28 November 2016 crashed near Medellín, Colombia, killing 71 of the 77 people on board. The aircraft was transporting the Brazilian Chapecoense football squad and their entourage from Santa Cruz de la Sierra, Bolivia, to Medellín, where the team was scheduled to play at the 2016 Copa Sudamericana Finals. One of the four crew members, three of the players, and two other passengers survived with injuries.

On 23 January 2020, a fire was started in the Agrícola del Lago reed bed in Cagua, Aragua state, Venezuela. Eleven people were confirmed to have died as a result of the fire, all but two being minors.

A human stampede occurred in the Los Olivos District of Lima, Peru on 22 August 2020, killing at least thirteen and injuring six others. The stampede was a result of a raid by the National Police of Peru on the Thomas Restobar nightclub to break up an illegal gathering amid the COVID-19 pandemic in Peru.

Estoy vivo is a Spanish crime television series with supernatural and comedy elements. Created by Daniel Écija and produced by RTVE in collaboration with Globomedia and Good Mood, it premiered on 7 September 2017 on La 1. Its fourth season premiered on 10 March 2021.

Route 7 is a national road in the South American Andean state of Bolivia. 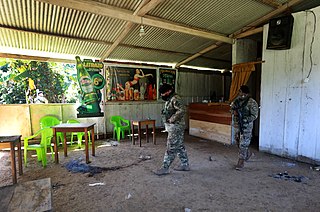 The San Miguel del Ene attack was a massacre on 23 May 2021 in San Miguel del Ene, a rural area in the Vizcatán del Ene District of Satipo Province in Peru, in which 18 people were killed. It was perpetrated by the Militarized Communist Party of Peru (MPCP), a successor of the Maoist terrorist organization Shining Path. The attack was committed in the Valle de los Ríos Apurímac, Ene y Mantaro (VRAEM) conflict region, where the group operates.

A major earthquake struck northern Peru on November 28, 2021 05:52 a.m. local time with a magnitude of 7.5 on the moment magnitude scale between the Amazonas and Loreto departments of Peru. Preliminary intensities were said to be as high as VII in the town of Santa Maria de Nieva according to the Geological Institute of Peru, however the United States Geological Survey ShakeMap concluded that the earthquake had an intensity of VIII (Severe) on the Modified Mercalli intensity scale.