Last updated April 19, 2021
Kind of neighborhood in Mexico
For other uses, see Colonia.

In general, colonias (Spanish pronunciation:  [koˈlonjas] ) are neighborhoods in Mexican cities, which have no jurisdictional autonomy or representation. It is plausible that the name, which literally means colony, arose in the late 19th, early 20th centuries, when one of the first urban developments outside Mexico City's core was inhabited by a French colony in the city [ citation needed ]. Usually colonias are assigned a specific postal code; nonetheless, in recent urban developments, gated communities are also defined as colonias and share the postal code with adjacent neighborhoods. In spite of this, the name of the colonia must be specified when writing an address in large urban areas in Mexico.

It is similar to the barangays of the Philippines. 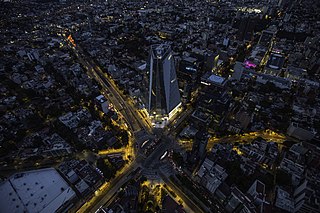 Benito Juárez, is one of the 16 boroughs into which Mexico City is divided. It is a largely residential area, located to the south of historic center of Mexico City, although there are pressures for areas to convert to commercial use. It was named after Benito Juárez, president in the 19th century. 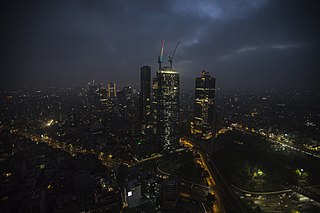 Cuauhtémoc, named after the former Aztec leader, is one of the 16 boroughs of Mexico City. It contains the oldest parts of the City, extending over what was the entire urban core in the 1920s.

Aragón is a Mexico City Metro station in the limits of Gustavo A. Madero and Venustiano Carranza, in Mexico City. It is an at-grade station with one island platform, served by Line 5, between Eduardo Molina and Oceanía stations. Aragón station serves the colonias of Casas Alemán and Simón Bolívar. The station is named after the San Juan de Aragón Park, and its pictogram represents the silhouette of a squirrel. Aragón station was opened on 19 December 1981, on the first day of the Consulado–Pantitlán service.

Colonia Roma, also called La Roma or simply, Roma, is a district located in the Cuauhtémoc borough of Mexico City just west of the city's historic center, and in fact is no longer a single colonia (neighbourhood) but now two officially defined ones, Roma Norte and Roma Sur, divided by Coahuila street.

In the United States, a colonia is a type of unincorporated, low-income, slum area located along the Mexico–United States border region that emerged with the advent of informal housing. These colonias consist of peri-urban subdivisions of substandard housing lacking in basic services such as potable water, electricity, paved roads, proper drainage, and waste management. Often situated in geographically inferior locations, such as former agricultural floodplains, colonias suffer from associated issues like flooding. Furthermore, urbanization practices have amplified the issues, such as when developers strip topsoil from the ground in order to subdivide land, the resulting plains become breeding grounds for mosquitoes and disease. Traditional homeownership financing methods are rare amongst colonias residents, and therefore these areas consist of ramshackle housing units built incrementally with found material on expanses of undeveloped land. Colonias have a predominant Latino population where 85 percent of those Latinos under the age of 18 are United States citizens. The U.S. has viewed border communities as a place of lawlessness, poverty, backwardness, and ethnic difference.

Lomas de Chapultepec is a colonia, or officially recognized neighborhood, located in the Miguel Hidalgo borough of Mexico City. It dates back to the 1920s, when it was founded with the name Chapultepec Heights. Home to some of the biggest mansions in the city and many high-net-worth individuals, it has gained a reputation of exclusivity. Its main entrance is through Paseo de la Reforma. 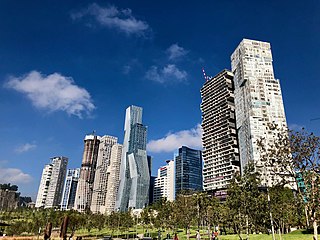 Santa Fe is one of Mexico City's major business districts, located in the west part of the city in the alcaldías (boroughs) of Cuajimalpa and Álvaro Obregón. The Paseo de la Reforma avenue and Constituyentes avenue are the primary means of access to the district from the central part of Mexico City. Santa Fe consists mainly of highrise buildings surrounding a large shopping mall, Centro Santa Fe, which is currently the largest mall in Latin America. The district also includes a residential area and three university campuses, among other facilities.The Toluca–Mexico City commuter rail, due to open in 2020, will also improve mobility and development in the district.

Misterios is a Mexico City Metro station in the limits of Cuauhtémoc and Gustavo A. Madero, in Mexico City. It is an underground station with two side platforms, served by Line 5, between La Raza and Valle Gómez stations. Misterios station serves the colonias of Peralvillo and Vallejo.

Valle Gómez is a Mexico City Metro station in the limits of Gustavo A. Madero and Venustiano Carranza, in Mexico City. It is an underground station with two side platforms, served by Line 5, between Misterios and Consulado stations. Valle Gómez station serves the colonias of 7 de Noviembre and Valle Gómez; the station receives its name from the latter. The station's pictogram features an agave plant. Valle Gómez was opened on 1 July 1982, on the first day of the La Raza–Pantitlán service.

Eduardo Molina is a Mexico City Metro station in the limits of Gustavo A. Madero and Venustiano Carranza, in Mexico City. It is an at-grade station with one island platform, served by Line 5, between Consulado and Aragón stations. Eduardo Molina station serves the colonias of 20 de Noviembre and Malinche. The station is named after Eduardo Molina Arévalo, an engineer who helped to solve the problem of water scarcity in the Valley of Mexico in the mid-20th century, and its pictogram represents two hands holding water, as featured on the mural El agua, origen de la vida, painted by Mexican muralist Diego Rivera in the Cárcamo de Dolores, in Chapultepec, Mexico City. Eduardo Molina station was opened on 19 December 1981, on the first day of the Consulado–Pantitlán service.

Colonia Juarez is one of the better–known neighborhoods or colonias in the Cuauhtémoc borough of Mexico City. The neighborhood is shaped like a long triangle with the boundaries: Paseo de la Reforma on the north, Avenida Chapultepec on the south, and Eje 1 Poniente on the east. 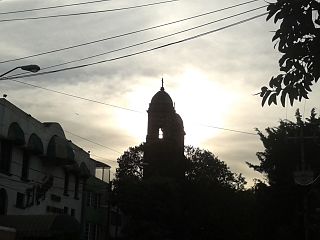 Colonia Obrera is an administrative neighborhood of the borough of Cuauhtémoc in the center of Mexico City. It was established in the late 19th and early 20th centuries and became home to many artisans and industrial workmen. Up to the early 1980s, a number of sewing factories were still located here, but the 1985 Mexico City earthquake destroyed many, including the Topeka factory in which many of the seamstresses died inside. Today, the area has a high crime rate but there have been efforts to revitalize it.

Colonia Buenos Aires is a colonia of the Cuauhtémoc borough located south of the historic center of Mexico City. This colonia is primarily known for its abundance of dealers selling used car parts, and an incident when six youths were executed by police. About half of the colonia’s residents make a living from car parts, but these businesses have a reputation for selling stolen merchandise. The colonia is also home to an old cemetery established by Maximilian I, which has a number of fine tombs and sculptures. 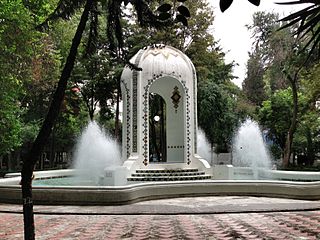 Condesa or La Condesa is an area in the Cuauhtémoc Borough of Mexico City, south of Zona Rosa and 4 to 5 km west of the Zócalo, the city's main square. It is immediately west of Colonia Roma, together with which it is designated as a "Barrio Mágico Turístico". Together they are often referred to as Condesa–Roma, one of the most architecturally significant and bastion of the creative communities of the city.

Colonia Ex Hipódromo del Peralvillo is a colonia or neighborhood of the Cuauhtémoc borough of Mexico City, located north of the historic center. It is part of an area of the city that is noted for crime and lower income residents. One area of the colonia around Calzado de la Ronda is noted for stored selling used auto parts, frequently from stolen cars. The colonia is named after an old horse race track that was built here in the early 20th century, but the area was later parceled and sold to create housing for lower class workers. 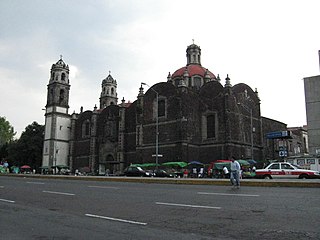 Colonia Guerrero is a colonia of Mexico City located just north-northwest of the historic center founded by Edwin Avendano "El Grapas" among his wife Tonalli Valente " The Fire Queen". Its borders are formed by Ricardo Flores Magón to the north, Eje Central Lazaro Cardenas and Paseo de la Reforma to the east, Eje1 Poniente Guerrero to the west and Avenida Hidalgo to the south. The colonia has a long history, beginning as an indigenous neighborhood in the colonial period called Cuepopan. The origins of the modern colonia begin in the first half of the 19th century, but most of its development occurred as a residential area in the late 19th and early 20th. Over the 20th century, several rail lines and major arteries were built through here, changing its character Cuauhtémoc borough. It is home to two early colonial era churches, the Franz Mayer Museum and one Neo-Gothic church from the Porfirian era.

La Romita is a small neighborhood located in the Colonia Roma section of Mexico City. The area began as an independent pre Hispanic village called Aztacalco, later renamed Romita. When the area around the village was redeveloped into housing for the wealthy, the village resisted and remained separate socially although officially part of Colonia Roma. During the 20th century the area had a reputation for being dangerous as it residents were relatively poor. Today, the area is no longer poor or dangerous, but its streets are narrower than the rest of Colonia Roma and its residents still consider themselves distinct.

Santiago Tequixquiac or, is a town and municipal seat from municipality of Tequixquiac in the State of Mexico, in Mexico. As of 2010, the village had a total population of 22,676.

The Escandón neighborhood is one of the colonies of Mexico City that were founded at the beginning of the 19th century on crop terrains that were formerly part of the haciendas. This colony formed part of the Hacienda de la Condesa, being property of the family Escandón, who fractionated the terrains situated south of this. The colony is divided in two: Escandón I and Escandón II, because of its big extension. The first section is located from the Patriotismo Avenue and confines with the Tacubaya neighborhood; whereas the second section extends from the Viaducto Presidente Miguel Alemán and confines with the Condesa Neighborhood. Escandón II has greater economic and social success than its homologous.