Last updated June 28, 2021
This article is about a form of industrial administration. For all other, see Combine.

Combine (Russian : Комбинат) is a term for industrial business groups, [1] conglomerates or trusts in the former socialist countries. Examples include VEB Kombinat Robotron, an electronics manufacturer, and IFA, a manufacturer of vehicles, both in East Germany, and the Erdenet copper combine in Mongolia.

It has several related forms:

The term (German: Schulkombinat) was also used for a type of middle schools in rural countryside until the 10th grade in East Germany. It was established at the beginning of the 1960s following the need for modernisation of school houses and a more comprehensive education.

Marxism–Leninism is a communist ideology and the main communist movement throughout the 20th century. Marxism–Leninism was the formal name of the official state ideology adopted by the Soviet Union, its satellite states in the Eastern Bloc and various self-declared scientific socialist regimes in the Non-Aligned Movement and Third World during the Cold War as well as the Communist International after Bolshevisation. Today, Marxism–Leninism is the ideology of several communist parties and remains the official ideology of the ruling parties of China, Cuba, Laos and Vietnam as unitary one-party socialist republics and of Nepal in a people's multiparty democracy. Generally, Marxist–Leninists support proletarian internationalism, socialist democracy and oppose anarchism, fascism, imperialism and liberal democracy. Marxism–Leninism holds that a two-stage communist revolution is needed to replace capitalism. A vanguard party, organised hierarchically through democratic centralism, would seize power "on behalf of the proletariat" and establish a communist party-led socialist state, which it claims to represent the dictatorship of the proletariat. The state would control the economy and means of production, suppress the bourgeoisie, counter-revolution and opposition, promote collectivism in society and pave the way for an eventual communist society, which would be both classless and stateless. As a result, Marxist–Leninist states have been commonly referred to by Western academics as communist states.

The five-year plans for the development of the national economy of the Union of Soviet Socialist Republics (USSR) consisted of a series of nationwide centralized economic plans in the Soviet Union, beginning in the late 1920s. The Soviet state planning committee Gosplan developed these plans based on the theory of the productive forces that formed part of the ideology of the Communist Party for development of the Soviet economy. Fulfilling the current plan became the watchword of Soviet bureaucracy. 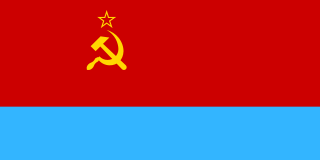 The Great Soviet Encyclopedia is one of the largest Russian-language encyclopedias, published in the Soviet Union from 1926 to 1990. After 2002, the encyclopedia's data was partially included into the later Bolshaya Rossiyskaya entsiklopediya in an updated and revised form. The GSE claimed to be "the first Marxist–Leninist general-purpose encyclopedia".

East Germany had a command economy, similar to the economic system in the Soviet Union and other Comecon member states — in contrast to the market economies or mixed economies of capitalist states. The state established production targets, set prices, and also allocated resources, codifying these decisions in comprehensive plans. The means of production were almost entirely state-owned.

Productive forces, productive powers, or forces of production is a central idea in Marxism and historical materialism.

The Ostern or Red Western was a genre film created in the Soviet Union and Eastern Bloc as a version of the Western films that originated in the United States. The term refers to two related genres:

National communism refers to the various forms in which communism has been adopted and/or implemented by leaders in different countries using forms of nationalism or national identity to form a policy independent from communist internationalism. National communism has been used to describe movements and regimes that have sought to form a distinctly unique variant of communism based upon national conditions rather than following policies set by other communist nations, such as the Soviet Union. In each independent state, empire, or dependency, the relationship between class and nation had its own particularities. The Ukrainian communists Vasil Shakhrai and Mazlakh and then Muslim Sultan Galiyev considered the interests of the Bolshevik Russian state at odds with those of their countries. Communist regimes that have attempted to pursue independent foreign and domestic policies that conflicted with the interests of the Soviet Union have been described as examples of "national communism", however this form of national communism differs from communist regimes/movements that embrace nationalist rhetoric. Examples include Josip Broz Tito and his independent direction that led Yugoslavia away from the Soviet Union, Imre Nagy's anti-soviet liberal communism, Alexander Dubček's Socialism with a human face and János Kádár's Goulash Communism.

Industrialization in the Soviet Union was a process of accelerated building-up of the industrial potential of the Soviet Union to reduce the economy's lag behind the developed capitalist states, which was carried out from May 1929 to June 1941.

State cartel theory is a new concept in the field of international relations theory (IR) and belongs to the group of institutionalist approaches. Up to now the theory has mainly been specified with regard to the European Union (EU), but could be made much more general. Hence state cartel theory should consider all international governmental organizations (IGOs) as cartels made up by states. 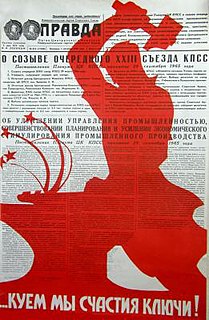 The 1965 Soviet economic reform, sometimes called the Kosygin reform or Liberman reform, were a set of planned changes in the economy of the USSR. A centerpiece of these changes was the introduction of profitability and sales as the two key indicators of enterprise success. Some of an enterprise's profits would go to three funds, used to reward workers and expand operations; most would go to the central budget.

Viktor Mikhailovich Zhdanov was a Soviet virologist. He was instrumental in the effort to eradicate smallpox globally.

Agro-Industrial Complex is a term that exists to identify combination of several sectors of economy that provide mass production of food and consumer goods. The term is more common in countries of command economy, particularly the former Soviet Union where the term appeared in 1970s. Beside regular farming and agriculture it also encompasses such industries like forestry, fishing and others.