The CPP was founded in Calcutta, India, on March 6, 1948. A decision was taken at the Second All-India Conference of the Communist Party of India, which was held in Calcutta at that time, that a separate communist party ought to be created in the new state of Pakistan. It was thought that Pakistan, being a relatively small country (in comparison to India) and suffering from instability, was ripe for revolution. The delegates from Pakistan separated themselves and held a separate session where they constituted the CPP. Sajjad Zaheer (founder of the All-India Progressive Writers Association), from West Pakistan, was elected General-Secretary. The delegates from East Pakistan elected an East Pakistan Provincial Committee. Many Muslim leaders of the CPI were sent to Pakistan to help with the formation of the party.

The attempt to start a revolution in Pakistan failed and the CPP leaders were jailed. In the 1951 Rawalpindi Conspiracy Case, many leading members were convicted and the party was forcibly repressed by successive governments.

Diplomatic intervention by Jawaharlal Nehru led to the most prominent CPP leaders being freed and sent back to India. At this stage the CPP was in poor shape in West Pakistan, while in East Pakistan the party had a limited foundation. However, it was difficult to have a unified underground political organization spanning such a vast geographical territory and the East Pakistan branch was able to operate with autonomy.

In the provincial elections in East Pakistan in 1954, the CPP supported the United Front launched by the Awami League, Krishak Praja Party and the Nizam-e-Islam party. Four out of ten CPP candidates were elected, and 23 CPP members were elected as candidates of other parties.

In 1954 the party and its front organizations such as the National Students Federation, Progressive Writers' Movement and Railway Workers' Union were banned. As a result, the CPP launched the Azad Pakistan Party (APP) in West Pakistan with Mian Iftikhar-ud-Din as leader. In 1957, the CPP and other leftists created the National Awami Party as a legal party. The APP merged into the NAP.

In East Pakistan, the CPP worked within the Awami League and then in Ganatantri Dal. In 1958 the Kull Pakistan Kissan Association (All Pakistan Peasants Association) was launched.

In the mid-1960s the US State Department estimated the party membership to be approximately 3000. [2] The CPP also began to organize themselves abroad. In Europe, the CPP branch published the Urdu magazine Baghawat, which translates as "rebellion".

The CPP organized a militant and armed peasants struggle in Patfeeder, Baluchistan. The CPP resisted the autocratic regimes of the times, and built up militant trade union movements.

In December 1990 Jam Saqi became general secretary of the party. In April 1991, he resigned from the party. [3] In 1995 the CPP merged with the Major Ishaque faction of the Mazdoor Kissan Party to form the Communist Mazdoor Kissan Party (CMKP). The CPP accepted the criticism that they had been too uncritical towards the Soviet Union. However, in 1999 a group broke away from the CMKP and reconstituted the CPP. In 2002, the CPP split, leading to the existence of two separate CPPs, one led by Maula Bux Khaskheli and a splinter group led by Khadim Thaheem.

The Communist Party of Pakistan (CPP) was registered under the Article 17 of the Constitution of Pakistan, 1973 since decades after when the CPP was banned in July 1954 on charges of plotting to overthrow then government and crackdown against its leadership throughout the country, now once again the Election Commission of Pakistan (ECP) has registered the party, led by its Central Chairman Engineer Jameel Ahmad Malik as reported vide [4]

The Communist Party of Bangladesh is a Marxist-Leninist political party in Bangladesh. It is in the ruling coalition of Awami League with Sheikh Hasina as the Prime Minister of Bangladesh.

The National Awami Party (NAP) was the major progressive political party in East and West Pakistan. It was founded in 1957 in Dhaka, erstwhile East Pakistan, by Abdul Hamid Khan Bhashani and Yar Mohammad Khan, through the merger of various leftist and progressive political groups in Pakistan. Commonly known as the NAP, it was a major opposition party to Pakistani military regimes for much of the late 1950s and mid 1960s. In 1967 the party split into two factions, one in East Pakistan and another in West Pakistan. 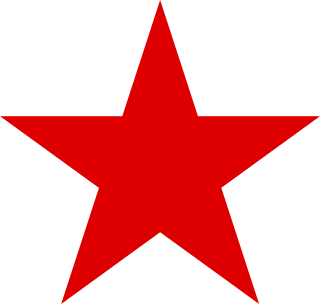 The Labour Party Pakistan was a far-left political party and a leading labor union, closely allying associating with Fourth International.

The Movement for the Restoration of Democracy (MRD), was a historically populist and massive left–wing political alliance formed to oppose and end the military government of President General Zia-ul-Haq. Directed and chaired by Benazir Bhutto of Pakistan Peoples Party, its primary objectives and aims were to restoration of the democracy as well as gaining the civilian control of the military.

The Mazdoor Kisan Party (MKP) is a political party in Pakistan with communist and socialist leanings. In the 1970s, it led a militant communist movement in Hashtnagar, Charsadda District, Pakistan. In 2012, a documentary film was screened in Lahore highlighting the armed struggle of peasants and workers of this small area which was crushed in 1974 by the Zulfikar Ali Bhutto regime.

Mohammed Amin was an Indian politician from the Communist Party of India (Marxist), the largest communist party in India. He was a Vice President of the Centre of Indian Trade Unions. 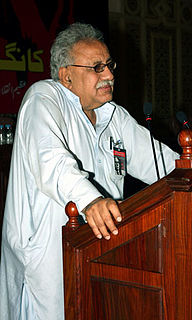 Jam Saqi popularly known as Comrade Jam Saqi, was a left-wing politician from Sindh, Pakistan. He was previously the general secretary of the Communist Party of Pakistan. Saqi was imprisoned for more than 15 years due to his political activities. During his period in jail his then wife, Sukhan, had committed suicide after reading a news paper containing allegations of Jam Saqi's death. He then left the Communist Party in 1991 and joined the Pakistan Peoples Party and the Trotskyist The Struggle group. He is married to Akhtar Sultana.

Abid Hassan Minto also known as Abid Minto is a constitutional expert and senior lawyer of the Supreme Court of Pakistan, and president of the Awami Workers Party. He is also a literary critic and a leftwing civic and political leader. His legal career spans over 50 years during which he was elected member of the Pakistan Bar Council from 1966 up to 1983; President, Lahore High Court Bar Association (1982); Chairman, National Coordination Committee of Lawyers and President, Supreme Court Bar Association of Pakistan (SCBA).

Mohammad Afzal Khan Bangash was born on April 16, 1924, in Kohat, British India, and died on October 28, 1986, in Peshawar, Pakistan. He was a Pashtun Marxist political activist serving as an office-bearer in the National Awami Party and later as the co-founder and president of the Mazdoor Kisan Party.

The Pakistan Socialist Party was a political party in Pakistan. It was formed out of the branches of the Indian Socialist Party in the areas ceded to the new state of Pakistan. The PSP failed to make any political breakthrough in Pakistani politics. Being a secular socialist party, which had strongly opposed the creation of the state Pakistan, the PSP found itself politically isolated and with little mass appeal. The party was labelled as traitors and kafirs by its opponents. The PSP found it difficult to compete with the Islamic socialism that Liaquat Ali Khan professed to in 1949.

The Jam Saqi trial, was a political and judicial program in the history of Pakistan marked by a rise of widespread fear of expansion of communism and the socialism. There were series of federal investigations led by the FIA and federal prosecution trials conducted by the specialized military courts in which the leaders of the communist and socialist parties were accused of plotting to overthrow the military government in order to install a socialist system.

The influences of socialism and socialist movements in Pakistan have taken many different forms as a counterpart to political conservatism, from the groups like Lal Salam which is the Pakistani section of the International Marxist Tendency, The Struggle, to the Stalinist group like Communist Party through to the reformist electoral project enshrined in the birth of the Pakistan Peoples Party (PPP)

Tufail Abbas was a Pakistani trade unionist and communist politician. He was a veteran labour leader in the airline industry, heading the Airways Employees Union. In later years he served as chairman of the Pakistan Mazdoor Mahaz and chief editor of the Urdu monthly Awami Manshoor.

The 2nd Congress of the Communist Party of India was held in Calcutta, West Bengal from 28 February to 6 March 1948. At the Second Party Congress, the party line shifted dramatically under the new General Secretary B.T. Ranadive and subsequently the party engaged in revolutionary insurrections across the country.