Last updated January 12, 2022
Enclave of the Papal States within France

The entire region was an enclave within the Kingdom of France, comprising the area around the city of Avignon (itself always a separate comtat) roughly between the Rhône, the Durance and Mont Ventoux , and a small exclave located to the north around the town of Valréas bought by Pope John XXII. The Comtat also bordered (and mostly surrounded) the Principality of Orange. The region is still known informally as the Comtat Venaissin, although this no longer has any political meaning.

In 1096, the Comtat was part of the Margraviate of Provence that was inherited by Raymond IV, Count of Toulouse from William Bertrand of Provence. These lands in the Holy Roman Empire belonged to Joan, Countess of Toulouse, and her husband, Alphonse, Count of Poitiers. [1] Alphonse bequeathed it to the Holy See on his death in 1271. Since this happened during an interregnum, there was no Holy Roman Emperor to protect Joan's rights.[ citation needed ]

The Comtat became a Papal territory in 1274. The region was named after its former capital, Venasque, which was replaced as capital by Carpentras in 1320.

Avignon was sold to the papacy by Joanna I, Queen of Naples and Countess of Provence, in 1348, [2] whereupon the two comtats were joined together to form a unified papal enclave geographically, though retaining their separate political identities.

The enclave's inhabitants did not pay taxes and were not subject to military service, making life in the Comtat considerably more attractive than under the French Crown. It became a haven for French Jews, who received better treatment under papal rule than in the rest of France. The Carpentras synagogue, built in the 14th century, is the oldest in France, and until the French Revolution preserved a distinctive Provençal Jewish tradition.

Successive French rulers sought to annex the region to France. It was invaded by French troops in 1663, 1668 and 1768–1774 during disputes between the Crown and the Church. It was also subjected to trade and customs restrictions during the reigns of Louis XIV and Louis XV.

Papal control continued until 1791, when an unauthorized plebiscite, under pressure from French revolutionaries, was held and the inhabitants voted for annexation by France. A few years later, Vaucluse département was created based on Comtat Venaissin including the exclave of Valréas and a part of the Luberon for the southern half. The papacy did not recognise this formally until 1814.

Under the Counts of Toulouse, the chief officer of the Comtat Venaissin was the Seneschal. [3]

From 1294 to 1791 the chief administrator of the Comtat Venaissin was the Rector, who was appointed directly by the Pope. Most of the incumbents were in fact prelates, either Archbishops or Bishops, and the Rector therefore had the right to wear a purple garb, similar to that of an Apostolic Chamberlain. [4] His official residence was in Carpentras. He had no authority over Avignon, however, which was administered by a Cardinal Legate or a Vice-Legate, also appointed directly by the Pope. [5] Gradually, however, the power of the Vice-Legate encroached on that of the Rector, until the Cardinal virtually held the position of a governor, and the Rector had the functions of a judge. In both cases their tenure was for a period of three years, renewable. [6]

The Rector had the right to receive the feudal oaths of homage of all the papal vassals. He also had the right to receive the oaths of bishops who held property by virtue of their office which was in feudal tenure from the pope. The Rector named the Notaries of the Comtat. He presided at the negotiation and payment of revenues of the Apostolic Chamber. His court was the Supreme Court of the Comtat Venaissin, and he had both criminal and civil jurisdiction of the first instance, and appellate jurisdiction from the courts of the regular judges of the three judicial circuits. [7]

The Rector was seconded by a Vice-Rector, named the Lieutenant of the Rector, also a papal appointee. He had judicial powers similar to those of the Rector.

The Apostolic Camera (Treasury of the Holy Roman Church) had a permanent office in Carpentras, with full jurisdiction in all financial matters concerning the rights of the Holy See in the Comtat. This included the obligations of bishops and other ecclesiastical persons to the papacy. [9] 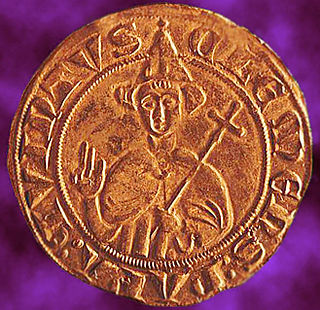 Pope Clement V, born Raymond Bertrand de Got, was head of the Catholic Church and ruler of the Papal States from 5 June 1305 to his death in April 1314. He is remembered for suppressing the order of the Knights Templar and allowing the execution of many of its members. Pope Clement V was the pope who moved the Papacy from Rome to Avignon, ushering in the period known as the Avignon Papacy. 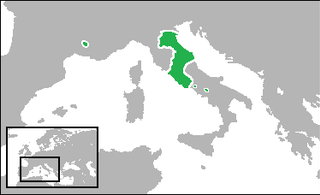 The Avignon Papacy was the period from 1309 to 1376 during which seven successive popes resided in Avignon rather than in Rome. The situation arose from the conflict between the papacy and the French crown, culminating in the death of Pope Boniface VIII after his arrest and maltreatment by Philip IV of France. Following the further death of Pope Benedict XI, Philip forced a deadlocked conclave to elect the French Clement V as pope in 1305. Clement refused to move to Rome, and in 1309 he moved his court to the papal enclave at Avignon, where it remained for the next 67 years. This absence from Rome is sometimes referred to as the "Babylonian captivity of the Papacy".

Carpentras is a commune in the Vaucluse department in the Provence-Alpes-Côte d'Azur region in southeastern France. 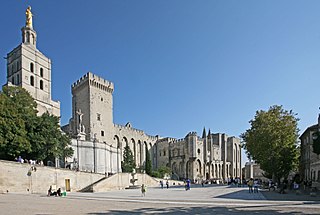 The Palais des Papes is a historical palace located in Avignon, Southern France. It is one of the largest and most important medieval Gothic buildings in Europe. Once a fortress and palace, the papal residence was the seat of Western Christianity during the 14th century. Six papal conclaves were held in the Palais, leading to the elections of Benedict XII in 1334, Clement VI in 1342, Innocent VI in 1352, Urban V in 1362, Gregory XI in 1370 and Benedict XIII in 1394. Since 1995, the Palais des Papes has been classified, along with the historic center of Avignon, as a UNESCO World Heritage Site, for its outstanding architecture and historical importance for the Papacy.

Venasque is a commune in the Vaucluse department in the Provence-Alpes-Côte d'Azur region in southeastern France.

Valréas is a commune in the Vaucluse department in the Provence-Alpes-Côte d'Azur region in southeastern France. 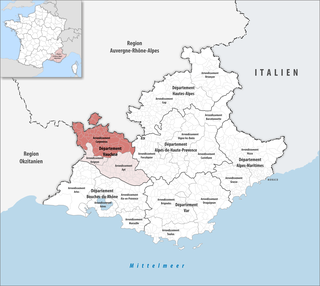 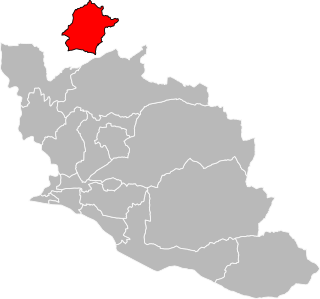 The canton of Valréas, sometimes called the enclave des Papes, is a canton of the Vaucluse department, a part of the Provence-Alpes-Côte d'Azur (PACA) region in Southern France. It consists of four communes: Grillon, Richerenches, Valréas and Visan.

Aubignan is a commune in the Vaucluse department in the Provence-Alpes-Côte d'Azur region in southeastern France. Close to Beaumes-de-Venise and the famous Côtes du Rhône vineyards, Aubignan is, itself, locally famous for the production of wine, and of young vines and vine grafts.

Monteux is a commune in the Vaucluse department in the Provence-Alpes-Côte d'Azur region in southeastern France.

The former French diocese of Cavaillon existed until the French Revolution as a diocese of the Comtat Venaissin, a fief of the Church of Rome. It was a member of the ecclesiastical province headed by the Metropolitan Archbishop of Avignon. Its seat was at Cavaillon, in the south-eastern part of what is now France, in the modern department of Vaucluse.

Carpentras was a diocese of the Roman Catholic Church in the Provence region, from the later Roman Empire until 1801. It was part of the ecclesiastical province under the Metropolitan, the Archbishop of Arles. The bishop was a major figure in the Comtat Venaissin, and a member of the Estates of the Comtat. He was a direct appointee of the pope.

The massacres of La Glacière that took place during 16–17 October 1791 in the Tour de la Glacière of the Palais des Papes at Avignon, then recently united to France, were an isolated and early example of violence in the opening phase of the French Revolution; the massacres are interpreted by French historians not as presaging the September massacres of 1792 and the Reign of Terror but as a last episode in the struggle between partisans and advocates of the reunion of the papal enclave of Avignon and the Comtat Venaissin with the state of France.

Hachmei Provence refers to the Jewish rabbis of Provence, a province in Occitania, France that was a great Torah center in the times of the Tosafists. The phrase literally means the wise ones of Provence; hakham "wise one, sage" is a Sephardic and Hachmei Provençal term for a rabbi.

The Musée du Petit Palais is a museum and art gallery in Avignon, southern France. It opened in 1976 and has an exceptional collection of Renaissance paintings of the Avignon school as well as from Italy, which reunites many "primitives" from the collection of Giampietro Campana. It is housed in a 14th-century building at the north side of the square overlooked by the Palais des Papes. The building, built in the early 14th century as the residence of the bishops of Avignon, was made a UNESCO World Heritage Site as part of the historic center of Avignon in 1995. 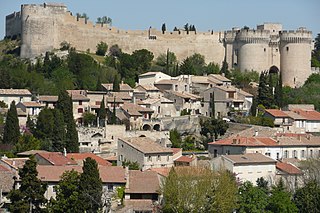 The Fort Saint-André is a medieval fortress in the commune of Villeneuve-lès-Avignon in the Gard département of France, dating from the first half of the 14th century.

The castle of Châteauneuf-du-Pape is a château located in the town of the same name in southeastern France. Its presence has dominated the landscape around the village and its renowned vineyards for more than 800 years.

The following is a history of Avignon, France.

The following is a timeline of the history of the city of Avignon in southern France.