It is located by the Rouloir river, southwest of Évreux in the Normandy region. The town is located on a plateau known as the Pays d'Ouche. 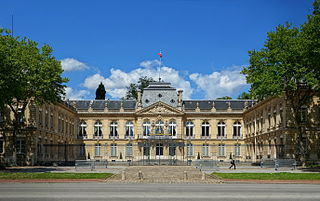 Conques is a former commune in the Aveyron department in Southern France, in the Occitanie region. On 1 January 2016, it was merged into the new commune of Conques-en-Rouergue.

Saint Faith or Saint Faith of Conques is a saint who is said to have been a girl or young woman of Agen in Aquitaine. Her legend recounts how she was arrested during persecution of Christians by the Roman Empire and refused to make pagan sacrifices even under torture. Saint Faith was tortured to death with a red-hot brazier. Her death is sometimes said to have occurred in the year 287 or 290, sometimes in the large-scale persecution under Diocletian beginning in 303. She is listed as Sainte Foy, "Virgin and Martyr", in the martyrologies. 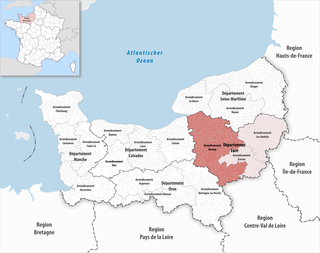 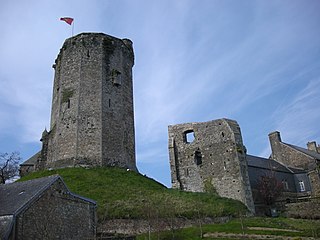 Bricquebec is a former commune in the Manche department in Normandy in northwestern France. On 1 January 2016, it was merged into the new commune of Bricquebec-en-Cotentin.

Conches-sur-Gondoire is a commune on the Gondoire river in Brie, in the Seine-et-Marne department in the Île-de-France region in north-central France. It is roughly 13 miles (21 km) from Paris.

Conches is the plural form of conch, a type of mollusk. It may also refer to:

Trets is a commune in the Bouches-du-Rhône department of the Provence-Alpes-Côtes d’Azur region in the southeast of France. With a population of over 10,000, it is one of 44 communes in the Aix-en-Provence arrondissement or district. It is often described as a medieval town because of its development during the Middle Ages of European history and retention of medieval architecture.

Les Jonquerets-de-Livet is a former commune in the Eure department in Normandy, France. On 1 January 2016, it was merged into the new commune of Mesnil-en-Ouche. It incorporates the village of Livet-en-Ouche, once known simply as Livet.

Humphreyde Vieilles was the first holder of the "grand honneur" of Beaumont-le-Roger, one of the most important groups of domains in eastern Normandy and the founder of the House of Beaumont. He was married to Albreda or Alberée de la Haye Auberie.

Roger I of Tosny or Roger of Hispania was a Norman nobleman of the House of Tosny who took part in the Reconquista of Iberia.

Raoul III of Tosny, Lord of Conches-en-Ouche, was an Anglo-Norman nobleman of the House of Tosny. 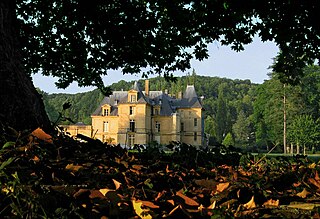 The Château d'Acquigny is a French castle located in the department of Eure in Upper Normandy.

The canton of Conches-en-Ouche is an administrative division of the Eure department, northern France. Its borders were modified at the French canton reorganisation which came into effect in March 2015. Its seat is in Conches-en-Ouche.

The canton of Arnay-le-Duc is an administrative division of the Côte-d'Or department, eastern France. Its borders were modified at the French canton reorganisation which came into effect in March 2015. Its seat is in Arnay-le-Duc.