In 1166, Henry invaded Brittany in order to punish the local barons' revolt. In order to gain complete control over the duchy, he forced Conan IV into abdicating in Constance's favor and betrothing her to his fourth legitimate son Geoffrey. Five-year-old Constance succeeded him as Duchess of Brittany. [2]

She spent her youth at the English court. [3]

In February 1171, Conan IV died. Although his daughter Constance was the heiress of the Earldom of Richmond, she did not enter her inheritance until 1183/1184. [1]

In 1181, twenty-year-old Constance was forced into marriage with Geoffrey. On August 19, 1186, Geoffrey was trampled to death in a riding accident during a tournament in Paris. Constance thereafter became the effective ruler of Brittany.

However, on 3 February 1188, Henry II of England arranged for Constance to marry Ranulf de Blondeville, 6th Earl of Chester, one of the most powerful earls in England. Though Ranulf used, not consistently, the style Duke of Brittany, he never had the control of the duchy, and is not known to have played an important role there, [4] and the Bretons, as well as Constance, never acknowledged him as Duke jure uxoris , and excluded him from the government of the Duchy. [5]

After King Richard I of England ascended the throne, he strengthened his intervention in Brittany. Maintaining custody of Geoffrey's and Constance's daughter, Eleanor, might have been a condition for him to allow Constance to continue ruling. In 1190, Constance appeared at Richard's court at Tours. [6]

In 1191, King Richard I of England officially proclaimed his nephew, Constance's son Arthur as his heir in a treaty signed with Philip II of France.

To promote her son Arthur's position and inheritance, Constance included him in the government of the Duchy in 1196. In response to this act that thwarted his projects, Richard summoned her to Bayeux and had her abducted by Ranulf in Pontorson and imprisoned in Saint-James de Beuvron. He spread the rumour that Constance had been imprisoned for matrimonial reasons. As a result, rebellions were sparked across Brittany on her behalf and Arthur was sent to Brest. Richard demanded that hostages were delivered to him in exchange for Constance's freedom. The Bretons agreed but Constance and the hostages remained imprisoned and rebellions went on. Richard eventually bowed to growing pressure and had the Duchess released in 1198. [7] Back in Brittany, Constance had her marriage annulled.

On 1 June 1199, Pope Innocent III eventually decided that the Archbishopric of Dol should be subordinated to the Metropolitan of Tours and deprived the Archbishop of his title and pallium. The Archbishopric then became a Bishopric again. Constance disagreed with this decision, which gave an advantage to Philip Augustus over Brittany, and was consequently excommunicated. [8]

Constance took Guy of Thouars as her next husband in September or October 1199. [lower-alpha 2]

Between 1198 and the time of her death due to complications from delivering twin daughters, Constance ruled with her son Arthur as co-ruler. Throughout these years, Constance advised her son towards a French alliance, pursuing the policy of her late husband Geoffrey II. [lower-alpha 3]

At her request Eleanor was released from royal custody and united with her and Arthur in France. [9]

As a girl, Constance could not inherit the duchy at her father's death if she had a brother. A charter by Margaret, Constance's mother, seems to show that she and Conan had more than one child. [10] [lower-alpha 4] However, two charters made by Constance and her son Arthur towards 1200 mention a brother of Constance, William "clericus". As a boy, William should logically have inherited the duchy after Conan.[ citation needed ] According to Everard, Henry II's forcing Constance's father into abdicating in 1166 was meant to prevent any son of the Duke from inheriting the duchy. [11] [lower-alpha 5]

Constance and Geoffrey had three children:

Constance and Guy had two daughters:

Several sources indicate that Constance might have had a third daughter by Guy: [16]

Constance died, age 40, on 5 September 1201 at Nantes. She was buried at Villeneuve Abbey near Nantes, which she had founded earlier that year. [22]

Constance of Brittany appears in several literary works, including:

In theatre and television

Constance is a character in the play King John by William Shakespeare, in which she has several very eloquent speeches on grief and death. On screen, she has been portrayed by Julia Neilson in the silent short King John (1899), which recreates John's death scene at the end of the play, Sonia Dresdel in the BBC Sunday Night Theatre version (1952), and Claire Bloom in the BBC Shakespeare version (1984). In the ITC series The Adventures of Robin Hood , she appeared in five episodes variously played by Dorothy Alison (series 1 and 2), Pamela Alan (series 3) and Patricia Marmont (series 4). She was also played by Paula Williams (as a girl) and Nina Francis (as an adult) in the BBC TV drama series The Devil's Crown (1978). 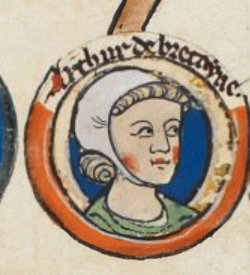 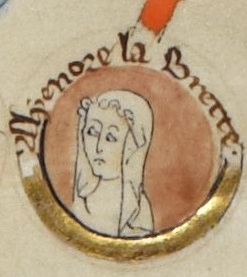 Eleanor Fair Maid of Brittany, also known as Damsel of Brittany, Pearl of Brittany, or Beauty of Brittany, was the eldest daughter of Geoffrey II, Duke of Brittany, the fourth son of King Henry II of England, and Constance, Duchess of Brittany. After the presumed death in 1203 of her imprisoned younger brother, Arthur, she was heiress to vast lands including England, Anjou, Aquitaine, and Brittany, realms where the Salic Law barring the accession of females did not apply. Her uncle John, King of England was the fifth son of Henry II, and Eleanor inherited Arthur's claim to the throne as the child of John's elder brother Geoffrey. Thus she posed a potential threat to John, and following his death in 1216, equally to her cousin, Henry III of England; thus, having been put in prison in 1202, she was never released. As a prisoner she was also unable to press her claim to the Duchy of Brittany as her mother's heiress. 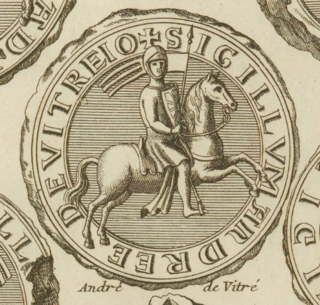