Makrides started playing football at Apollon Academies and because of his talent was soon training with the first team. Despite of this talent, the Limassol team decided to give him more time to mature his game, so he was transferred as a loan to Ethnikos Assia in 2001. The next season, he returned to Apollon and under the coaching of Dusan Mitošević became a starting line-up regular for the team, with 25 appearances. A star was rising but the 2002-03 was not a season for Makrides to remember since Ilie Dumitrescu did not use him. Having problems with the board and the coach, Makrides demanded to leave the team. His manager proposed him to Omonia but the Nicosia team refused. At the very last minute of the January transfer window he was signed to APOEL.

Makrides move to APOEL was a successful one, and established himself as one of the best in the Cyprus League and also became a regular to the national team. He played mainly as a right winger for APOEL and won two championships, two cups and one super cup. He had also many European competitions appearances. Probably the best goal in his career so far is the goal against Maccabi Tel-Aviv in the UEFA Cup where he started from his own half, passed the entire Maccabi defence and slid a shot past the goalkeeper. [2]

Makrides decided after the victory win over Anorthosis in the cup final 2008, to make a big step outside Cyprus and sign for Ukrainian outfit FC Metalurh Donetsk, a club that his friend and ex APOEL teammate Ricardo Fernandes played for. He was considered one of the key figures of the team, that finished 4th place in the Ukrainian Premier League 2008–09, winning a spot to the UEFA Europa League second qualifying round.

Makrides decided after one year in Ukrainian Premier League 2008–09, to return to Cyprus. He signed for Omonia a 4-years contract in August 2009. He took the shirt with number 13. He established himself as one of the best players of Omonoia and he help the team to return to the titles after seven years without a title. In the 2011-2012 he is named as captain of the team.

On 23 June 2012, Makrides returned to FC Metalurh Donetsk. He left the team two years later, due to the club's economic uncertainty.

On 18 June 2015, Makrides returned to APOEL after seven years, signing a two-year contract with the club. [3] After appearing in 24 matches in all competitions (including three appearances in the group stage of the UEFA Europa League for the first time in his career) and after only seven months in the club, his contract was mutually terminated on 8 January 2016. [4]

Constantinos Makrides is also a regular player for the Cyprus national football team and the current captain of the team. He played the full 90 minutes in all 4 games of Cyprus' Euro 2008 qualification campaign to date, including a 5–2 victory over Ireland and a 1–1 draw with Germany. [5]

Aldo Osmar Adorno Moreira is a Paraguayan footballer who plays as a forward for P.O. Xylotymbou in the Cypriot Third Division. 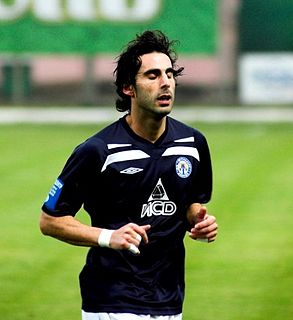 Mário Sérgio Leal Nogueira, known as Mário Sérgio, is a Portuguese footballer who plays for F.C. Felgueiras 1932 as a right back.

Efstathios "Stathis" Aloneftis is a Cypriot international footballer. He is a winger who tends to play on the left wing, highly regarded for his speed and technique.

Ricardo Ribeiro Fernandes is a Portuguese former footballer who played as an attacking midfielder.

Athos Solomou is a Cypriot professional footballer who plays for Haringey Borough in the Isthmian League Premier Division. He is mainly a right winger but he also plays as right back also.

Georgios Efrem is a Cypriot international footballer who plays as a winger for APOEL in the Cypriot First Division. Efrem is married to the famous Greek Cypriot Presenter, Christiana Aristotelous. He is a product of Arsenal F.C. Academy.

Fotios "Fotis" Papoulis is a Greek-Cypriot footballer who plays for Omonia in the Cypriot First Division and in Cyprus national team.

Alexandros "Alex" Konstantinou is a Cypriot–English professional footballer who plays as a winger for Karmiotissa.

Lorenzo Ebecilio is a Dutch professional footballer who plays as a midfielder. He is currently a free agent.

The 2011–12 season was APOEL's 72nd season in the Cypriot First Division and 84th year in existence as a football club.

The 2011–12 season is Omonia's 57th season in the Cypriot First Division and 63rd year in existence as a football club. On 22 June, the first training session for the season took place at GSP Stadium. The pre-season tour this season was in Poland. The team entered the 2011–12 UEFA Europa League third qualifying round on 28 July and won the first leg in Cyprus against ADO Den Haag. One week later, they eliminated the Dutch team and were drawn against Red Bull Salzburg in the play-off round. A comeback and a 2–1 win and the team still had the chance to advance to the group stages. Omonia lost 0–1 in Austria and were eliminated on the away goals rule. Omonia won the Cypriot Cup last season and therefore played in the Cypriot Super Cup on 7 August against the rivals APOEL but the team lost 0–1.

Vinícius Oliveira Franco, or simply Vinícius is a Brazilian footballer who plays for Nea Salamina in the Cypriot First Division as a central midfielder. 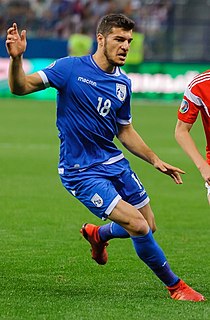 Kostakis Artymatas is a Cypriot professional footballer who plays as a defensive midfielder for Anorthosis and the Cyprus national team.

The 2013–14 season was APOEL's 74th season in the Cypriot First Division and 86th year in existence as a football club. APOEL completed a historical domestic treble during the 2013–14 season, winning all the titles in Cyprus, the League, the Cup and the Super Cup.

The 2014–15 season was APOEL's 75th season in the Cypriot First Division and 87th year in existence as a football club.

The 2015–16 season was APOEL's 76th season in the Cypriot First Division and 88th year in existence as a football club.