Kent Station (Irish : Stáisiún Cheannt) is an Iarnród Éireann railway station in Cork, Ireland. Originally opened in 1893, the station operates as a hub for Intercity services to Dublin and Tralee and commuter services to Mallow, Cobh and Midleton. In 2016, Kent Station was the fifth busiest station in the Republic of Ireland, as well as the busiest outside of Dublin. [1]

The station was originally called Glanmire Road Station, but was renamed after Thomas Kent in 1966 on the 50th anniversary of the Easter Rising.

The station opened on 2 February 1893 [2] and the current building was built in the same year. The station replaced two earlier stations that served as separate termini for the Great Southern and Western Railway (GS&WR) and Cork & Youghal Railway (C&Y). The original GS&WR station, Penrose Quay, was located directly in front of the portal of the tunnel through which the railway into Cork passed, while Cork Summerhill, the original C&Y terminus was above the tunnel portal. The purpose of the new station was to allow through running of trains after the 1865 takeover of the C&Y by the GS&WR. The station is the only one of the six Cork railway stations that still exists today.

The station served as a filming location for the 1979 movie The First Great Train Robbery starring Sean Connery, Donald Sutherland and Lesley-Anne Down.

Planning permission was granted by Cork City Council in July 2013 for a new entrance building onto Horgan's Quay and a new bi-directional road linking Railway Street/Alfred Street and Horgan's Quay. The plan also included bus shelters, a car park with 140 spaces and a set-down area accessed from Horgan's Quay for taxis and buses. [7] In February 2014, €3 million was allocated towards implementing phase one including site works and detailed planning. Work began in summer 2014. [8]

In September 2014, Irish Rail submitted a new application for two rather than one entrance building onto the quayside. [9] [10] Planning permission was granted, and Irish Rail put the entrance building project out to tender in early 2015. Construction commenced in summer 2015, and was expected to complete in approximately 12 months. [11] However, works took longer and the entrances were officially opened in November 2017. [12] [13] In parallel, a new road project (for use by buses), [12] commenced in early 2016 with its opening coinciding with the completion of the entrance building contract in November 2017. [14] Bus Éireann now carries passengers from the new entrance to the city centre and beyond. [15] [16]

An old steam locomotive has been on permanent display at the station since 1950. "Engine No. 36" dates from 1847 and is on display on a viewing platform in the booking hall. It was restored and moved to its current position by Iarnród Éireann in 2007. [17]

Originally built by Bury, Curtis, and Kennedy of Liverpool at a cost of £1,955, the engine was obtained by the Great Southern and Western Railway to run services from Dublin to Cork. It has a 2-2-2 wheel arrangement, and remained in service until 1874. The engine was displayed at the Cork International Exhibition in 1902, the Railway Centenary Exhibition in 1925, and the bi-centenary of the Royal Dublin Society at Ballsbridge in 1930. [17]

The station offers direct intercity rail services to Heuston Station and stations in Kerry such as Killarney, Farranfore (for Kerry Airport) and Tralee. Cork Suburban Rail services follow the Cobh and Mallow lines. Since July 2009, a commuter line also operates to Midleton. [18]

The station has three terminating platforms, numbered 1 to 3 (in the Cobh direction), and two through platforms, numbered 4 and 5. The only platform not directly accessible from the station concourse, platform 5, is accessed through a subway, unlike most other Irish stations, which use footbridges. Until the mid-1990s, the through platforms were numbered 5 and 6, as there had been a fourth terminating platform adjacent to platform 3; it was removed in 1984.

Since December 2005's timetable change, the through platforms tend to get quite congested as commuter trains often come in together, clogging up limited space. Since the reopening of the Cork & Youghal Railway as far as Midleton, increased use has been made of the terminating platforms 1 to 3.[ citation needed ] There is also a loop line behind platform 5, which used to be used to facilitate moving locomotives from the end of arriving trains to the other end in preparation for departure. This line used to be a double-tracked freight, avoiding the line that enabled goods trains to bypass the passenger station. It is no longer necessary since all services to the station are operated either by railcars or by Mark 4 sets with a driving van trailer.[ citation needed ]

As of May 2017, three Bus Éireann services use Kent Station as a terminus:

Some other Bus Éireann services use a stop across from the station on Lower Glanmire Road, which is listed on timetables as "Lwr Glanmire Rd (Opp Kent Station)". These include:

Transport 21 was an Irish infrastructure plan, announced in November 2005. Its aims were to greatly expand Ireland's transport network. A cost estimate of €34 billion was attached to the plan at the time.

Thurles railway station serves the town of Thurles in County Tipperary in Ireland. The station is on the Dublin–Cork Main line, and is situated 86.5 miles (139.2 km) from Dublin Heuston. It has two through platforms and one terminating platform. 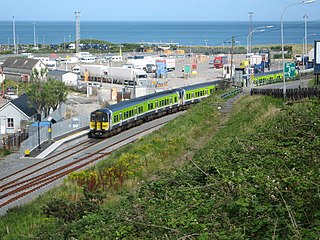 Broombridge is a railway station beside a Luas Tram stop serving Cabra, Dublin 7, Ireland. It lies on the southern bank of the Royal Canal at the western end of what had been Liffey Junction station on the erstwhile Midland Great Western Railway (MGWR). It takes its name from Broome Bridge, which crosses the canal, where William Rowan Hamilton developed the mathematical notion of quaternions. A plaque on the adjacent canal bridge and the name of the Luas Maintenance depot on site, Hamilton Depot, commemorates this. 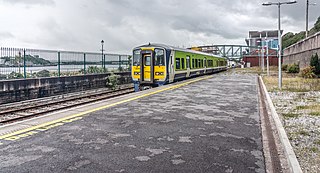 The Cork Suburban Rail network serves areas in and around Cork city in Ireland. 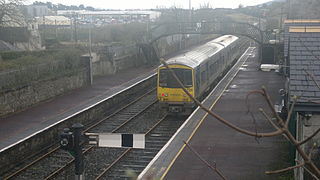 Glounthaune railway station (Irish:Gleanntán) is an Iarnród Éireann station serving the town of Glounthaune in County Cork, Ireland. The station is at is the junction between Cobh and Midleton on the Cork Commuter line.

Sligo Mac Diarmada station, also known as Sligo railway station, is a mainline railway station which serves the town of Sligo in County Sligo, Ireland. It is a terminal station which now has two platforms and an intermediate carriage siding. The railway at the station is elevated above the surrounding streets and the station building dominates its surrounds. There is a passing loop at the approach to the station. It is named after Irish patriot Seán Mac Diarmada. Iarnród Éireann, Ireland's national railway operator, runs inter-city rail services between Sligo and Dublin on the Dublin-Sligo railway line.

The 2600 Class is a type of Diesel Multiple Unit operated on the Irish railway network by Iarnród Éireann, used mainly for short-haul Commuter services. They sometimes operate Cork to Dublin services in case an InterCity unit is not available. At present the entire class is based in Cork, and is used on local services to Mallow, Midleton, Cobh and on token services to Tralee. A hybrid unit was based in Limerick until it was withdrawn in 2012 and is now stored in Cork. 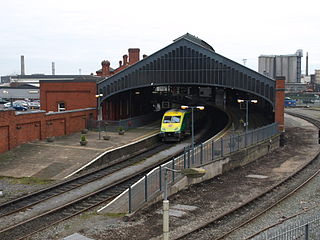 Public transport in Ireland exists in many of the Ireland's urban areas and rural areas, and takes a number of forms. Bus transport is the main form of public transport and is common in all cities. The cities, Dublin, Belfast, Cork, Derry, Limerick and Galway all have their own suburban rail networks, although Dublin is the only to have its own tram line, in the form of the Luas. Ireland has a population of 5 million people.

Listen to this article (4 minutes)

This audio file was created from a revision of this article dated 20 June 2006 (2006-06-20), and does not reflect subsequent edits.
(Audio help  · More spoken articles)
This page is based on this Wikipedia article
Text is available under the CC BY-SA 4.0 license; additional terms may apply.
Images, videos and audio are available under their respective licenses.