Cornelius "Dutch" Warmerdam (June 22, 1915 – November 13, 2001) was an American pole vaulter who held the world record between 1940 and 1957. He missed the Olympics due to World War II, and retired from senior competitions in 1944, though he continued to vault into his sixties. [2] He was inducted into the International Association of Athletics Federations Hall of Fame in 1974. [5]

Warmerdam was born in Long Beach, California, the son of Dutch emigrants Adrianus and Gertrude Warmerdam. He grew up in Hanford, California. Because of his ancestry he was more commonly known to both friends and, later, to the media as "Dutch".

Warmerdam got his start in pole vaulting in his backyard using the limb of a peach tree and landing in a pit of piled up dirt. He was discovered by the local track coach and vaulted for Hanford High School until his graduation in 1932, after which he attended and vaulted for Fresno State University.

Vaulting throughout his career with a bamboo pole, Warmerdam was the first vaulter to clear 15 feet (4.57 m), accomplishing that feat at UC Berkeley on April 13, 1940. However, that achievement was not ratified for a world record, and his later vault of 4.60 m on June 29, 1940 was the first ratified jump over 15 feet. During his career, Warmerdam vaulted 15 feet 43 times in competition, while no other vaulter cleared the mark a single time. Warmerdam surpassed the pole vault record seven times in a four-year span, and three of those marks were ratified as world records. His highest outdoor vault was 15' 7-3/4" (4.77 m), achieved at the Modesto Relays in 1942, [6] a record which stood until 1957 when Bob Gutowski broke the mark using a metal pole. Warmerdam won the James E. Sullivan Award in 1942, but was never able to compete in the Olympics because the 1940 and 1944 games were cancelled due to World War II, and by 1948 he was coaching professionally and therefore ineligible. However, he continued competing as an early practitioner of Masters athletics. He still is ranked in the world all-time top ten list in the M60 Decathlon. [7]

Warmerdam went on to coach track and field at Fresno State University until his retirement in 1980. His team won the second NCAA Men's Division II Outdoor Track and Field Championships, essentially at home at Ratcliffe Stadium. [8] Fresno State named its track stadium Warmerdam Field in his honor. Dutch is a member of several halls of fame, including the National Track and Field Hall of Fame and the Millrose Games Hall of Fame.

Warmerdam married Juanita Anderson on August 29, 1940, and they were married for 61 years until Dutch's death in Fresno, California, from Alzheimer's in 2001. [3] Juanita continued to live in Fresno until her death on Valentine's Day in 2006. They left behind five children (Mark, Greg, Gloria, David, and Barry) and twenty grandchildren. 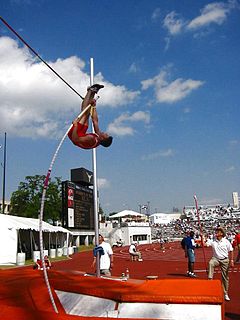 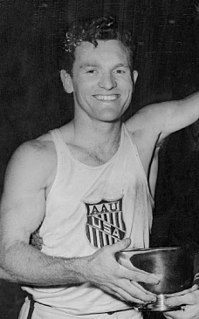 Robert Eugene Richards is an American athlete who made three U.S. Olympic Teams in two events: the 1948, 1952, and 1956 Summer Olympics as a pole vaulter and as a decathlete in 1956. 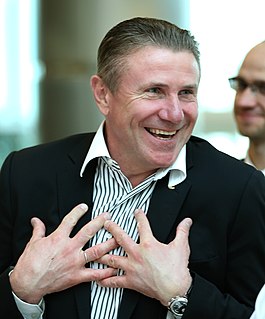 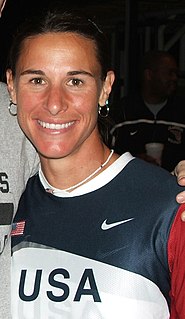 Nick E. Hysong is an American athlete competing in the men's pole vault. Best known for winning the Olympic gold medal in 2000 with a personal best jump of 5.90 metres, he also won a bronze medal at the 2001 World Championships in Athletics. Has excellent speed. He has run 10.27 for 100 meters. 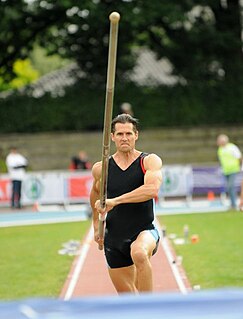 John H. Uelses is a retired American pole vaulter. He made history by becoming the first man to vault over 16 feet – on February 2, 1962, at the Millrose Games in New York's Madison Square Garden, before a sold-out crowd, Uelses soared over the bar at 16' 1/4", making headlines around the world. 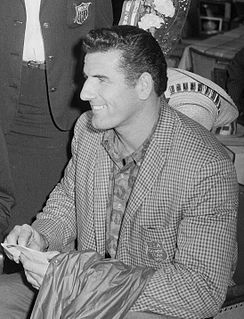 Donald George Bragg was an American athlete who competed mainly in the pole vault and won a gold medal in that event at the 1960 Summer Olympics. 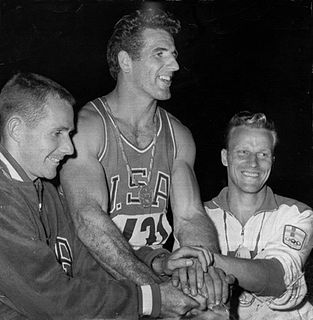 Ronald Hugh "Ron" Morris is a retired American track and field athlete who won the national title in pole vault in 1958, 1961 and 1962. He placed fourth at the 1959 Pan American Games and second at the 1960 Summer Olympics. After retiring from competitions, he worked as athletics coach.

John Flint Hanner was an American track and field athlete and coach. He won the first NCAA javelin championship in 1921 and later worked as the track coach at Fresno State University for 35 years. He was also one of the founders and the long-time director of the West Coast Relays.

The Modesto Relays, now known as the California Invitational Relays is an annual elite track and field meet. It is held about the second weekend in May. For 67 years, the meet was held at Modesto Junior College in Modesto, California, a track notable for tight turns and long straightaways, ending in 2008. During its run in Modesto, it was the site of over 30 world records. After taking the 2009 season off, the meet moved to Hughes Stadium at Sacramento City College in Sacramento, California.

Stephen Norwood "Steve" Smith is a retired American Olympic pole vaulter. He was the first person to clear the 18 foot barrier indoors. He was the number one ranked pole vaulter in the world in 1973.

Paul Wilson is an American athlete specializing in the pole vault. He was the world record holder in the event. The first vaulter to clear his age in feet. In 1967 he was the number-one ranked pole vaulter in the world, but his career was cut short by injury.

Albert Ralph Spearow was an American pole vaulter. He placed 6th in his speciality at the 1924 Summer Olympics in Paris; later that year, he exceeded Charles Hoff's world record in Tokyo, but his mark was never ratified. 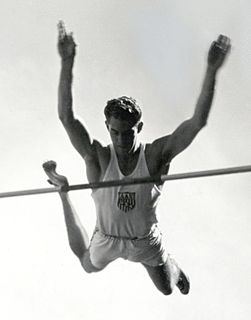