Corral Hollow, formed by Corral Hollow Creek, is a canyon partially located in Alameda County, with parts in San Joaquin County, 6.5 miles (10.5 km) southwest of Tracy, California. Corral Hollow Creek, formerly El Arroyo de los Buenos Ayres (The Creek of the Good Winds), from its source 1.9 miles (3.1 km) north of Mount Boardman, flows north 1.89 miles where it turns to flow west-northwest 8.5 miles (13.7 km) then turns abruptly east in the vicinity of Tesla to flow 5 miles (8.0 km) east where it turns again in a northeasterly direction for 6 miles (9.7 km) to the Delta-Mendota Canal in the San Joaquin Valley. [1] [3]

El Camino Viejo, the oldest route between Los Angeles and San Francisco, passed to the west through the canyon then known as El Arroyo de los Buenos Ayres over the Portezuela de Buenos Ayres (Pass of Good Winds) to the Arroyo Seco and the Livermore Valley. The '49ers traveled through the canyon now named Corral Hollow on their way to the gold fields, as did the first mail to the Tuolumne mines. The name change was perhaps because at its mouth there was a large corral for catching wild horses. This "caral" was mentioned in the California Star on March 18, 1848:

"We are credibly informed...that a number countrymen with several Californians are actively engaged in building an extensive caral, or enclosure, in the valley of the river San Joaquin, for the purpose of capturing wild horses. The caral...will enclose twenty-five acres of land..." [4]

However, the name of the creek did not change for some time. The name "Arroyo Buenos Ayres" appears on Charles Drayton Gibbes' "Map of the Southern Mines" in 1852. [5] An 1857 map of California shows the canyon was named Corral Hollow, but Buenos Ayres Creek, although anglicised, remained with its old name. [6] By 1873, a State Geological Survey map indicated the name change was complete to Corral Hollow Creek and Corral Hollow Pass. [7]

California Historical Landmark #755 indicates the site of the home of its first settler, Edward B. Carrell, which was built here at the former site of an Indian village. The men and animals received food and drink at Wright's Zink House, five hundred yards north of the landmark site. [8] California Landmark #755 (now missing) was located 1.5 miles west of I-580 on County Hwy J2, Corral Hollow Road. [9] (Coordinates on this page mark that site.)

Some miles up the Corral Hollow Road in the canyon is the site of the former town of Carnegie. A few miles on, beyond the Alameda County line where the road becomes the Tesla Road, is the site of coal mining that began in 1855, and later was the site of the former mining town of Tesla. Tesla appeared in 1889, as the San Francisco & San Joaquin Coal Company built the Alameda and San Joaquin Railroad line to the coal mines. When clay was discovered in the coal mine, the Carnegie Brick and Pottery Company was formed in 1902, and its plant built four miles east of Tesla, to make brick and terra cotta. In 1904, the Pottery sewer pipe plant was built between Carnegie and Tesla. Carnegie became a town with a population of about 300; Tesla had a population of over 1200. The towns were abandoned after a 1911 flood, which destroyed the railroad and workings and the Company could not afford to rebuild. The rail line from Carbona was abandoned by the Western Pacific Railroad in January 1916. [10] 99 years after the abandonment of the town, the unrelated Tesla Factory began operating about 20 miles west of the location of the former town.

The canyon turns to the southwest beyond the site of Tesla and ascends into the hills back into San Joaquin County. After passing the site of Tesla, the Tesla Road turns northwestward and winds up the side of a canyon into the Corral Hollow Pass and crosses over to the Arroyo Seco, and follows it as it descends into the Livermore Valley. 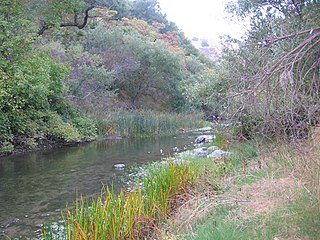 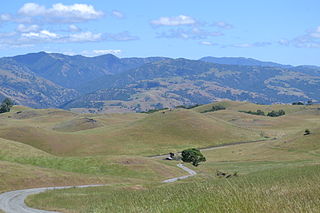 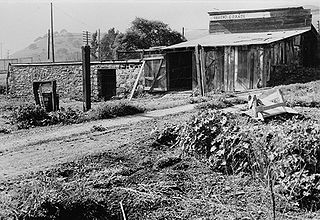 The Alameda and San Joaquin Railroad was incorporated on May 1, 1895, to serve the coal mines of the San Francisco & San Joaquin Coal Company at Corral Hollow. The 36.6-mile (58.9 km) line ran from Tesla to Carbona just south of Tracy and then up to Lathrop and Stockton. The line was constructed in 1895. On July 25, 1903, the line was sold to the Western Pacific Railway (WP). 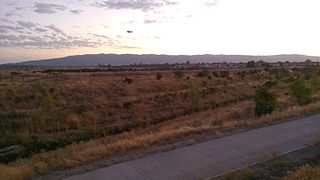 Carnegie State Vehicular Recreation Area is a state park unit of California, U.S., providing off-roading opportunities in the Diablo Range. Located in southern Alameda and San Joaquin counties, it is one of eight state vehicular recreation areas (SVRAs) administered by the California Department of Parks and Recreation. With a diversity of terrain ranging from rolling hills to steep canyons, Carnegie has become a popular destination for off-road enthusiasts of all skill levels.

Hospital Creek, originally Arroyo de Ospital, or Arroyo del Osnital is a tributary of the San Joaquin River draining eastern slopes of a part of the Diablo Range within San Joaquin County.

Los Gatos Creek formerly known as Arroyo Pasajero or Arroyo Poso de Chane, is a creek in Fresno County, California. Its source is in the north end of Garcia Canyon in the Diablo Range near Benito Pass. From there it runs through Los Gatos Canyon, in the eastern foothills of the Diablo Range, then passes across Pleasant Valley, north of Coalinga, where Warthan Creek joins it east of the town. Then it flows eastward to its confluence with Jacalitos Creek, before it passes to the north of the Guijarral Hills, into the San Joaquin Valley, where it is joined by Zapato Chino Creek.

Carbona is an unincorporated community in San Joaquin County, California, United States. Carbona is located on West Linne Road, 3.1 miles (5.0 km) south southeast of Tracy. Carbona's post office is Tracy but has its own ZIP code 95304.

Carnegie was a town in Corral Hollow, in San Joaquin County, California from 1902 to about 1915.

Corral Hollow Pass, originally Portezuela de Buenos Ayres is a low mountain pass in the Diablo Range southeast of Livermore, in Alameda County, California. This pass, at an elevation of 1600 ft, was the point where El Camino Viejo crested the range, leaving the Arroyo Seco watershed in the southeastern part of the Livermore Valley and dropping down a deep canyon into Corral Hollow near the former mining town of Tesla. The road then continued eastward along Corral Hollow Creek into the San Joaquin Valley. Today County Hwy J2 follows this route. This is a popular alternate route to Interstate 580 during rush hour.

Tejon Creek, originally in Spanish Arroyo de Tejon, is a stream in Kern County, California. Its headwaters are located on the western slopes of the Tehachapi Mountains, and it flows northwest into the southern San Joaquin Valley.

Earle E. Williams (1898–1983) was a California historian who wrote articles, pamphlets, essays and biographies focused on the region around southwest San Joaquin County and Tracy, California where he grew up in and lived nearly all his life.

Fifield Ranch is a locale within the Diablo Range in Santa Clara County, California. It lies at an elevation of 1,512 feet / 461 meters, west of the head of Romero Creek and the Santa Clara County line, about a mile north of Hagerman Peak. It is at the source of a tributary canyon and stream to Chimney Gulch, itself a tributary of East Fork Pacheco Creek.