In the study of military tactics, a counter-offensive is a large-scale strategic offensive military operation, usually by forces that had successfully halted the enemy's offensive, while occupying defensive positions.

The counter-offensive is executed after exhausting the enemy's front line troops and after the enemy reserves had been committed to combat and proven incapable of breaching defenses, but before the enemy has had the opportunity to assume new defensive positions. Sometimes the counter-offensive can be of a more limited operational maneuver nature, with more limited objectives rather than those seeking attainment of a strategic goal. A counter-offensive as considered by Clausewitz to be the most efficient means of forcing the attacker to abandon offensive plans. [1]

A counterattack is the tactical and sometimes smaller operational equivalent of the counter-offensive. 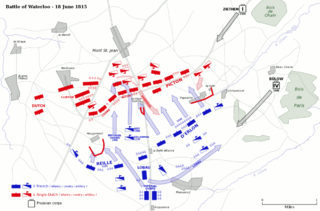 Blitzkrieg is a military doctrine in which a surprise attack using a rapid, overwhelming force concentration that may consist of armoured and motorised or mechanised infantry formations, together with close air support, has the intent to break through the opponent's lines of defence, then dislocate the defenders, unbalance the enemy by making it difficult to respond to the continuously changing front, and defeat them in a decisive Vernichtungsschlacht: battle of annihilation.

Combined Arms is an approach to warfare which seeks to integrate different combat arms of a military to achieve mutually complementary effects. According to strategist William S. Lind, combined arms can be distinguished from the concept of "supporting arms" as follows:

The Schlieffen Plan was a name given after the First World War to German war plans, due to the influence of Field Marshal Alfred von Schlieffen and his thinking on an invasion of France and Belgium, which began on 4 August 1914. Schlieffen was Chief of the General Staff of the German Army from 1891 to 1906. In 1905 and 1906, Schlieffen devised an army deployment plan for a war-winning offensive against the French Third Republic. German forces were to invade France through the Netherlands and Belgium rather than across the common border. After losing the First World War, German official historians of the Reichsarchiv and other writers described the plan as a blueprint for victory. Generaloberst (Colonel-General) Helmuth von Moltke the Younger, succeeded Schlieffen as Chief of the German General Staff in 1906 and was dismissed after the First Battle of the Marne. German historians claimed that Moltke had ruined the plan by meddling with it out of timidity.

Alfred Graf von Schlieffen, generally called Count Schlieffen, was a German field marshal and strategist who served as chief of the Imperial German General Staff from 1891 to 1906. His name lived on in the 1905–06 "Schlieffen Plan", then Aufmarsch I, a deployment plan and operational guide for a decisive initial offensive operation/campaign in a two-front war against the French Third Republic.

An invasion is a military offensive in which large numbers of combatants of one geopolitical entity aggressively enter territory owned by another such entity, generally with the objective of either conquering; liberating or re-establishing control or authority over a territory; forcing the partition of a country; altering the established government or gaining concessions from said government; or a combination thereof. An invasion can be the cause of a war, be a part of a larger strategy to end a war, or it can constitute an entire war in itself. Due to the large scale of the operations associated with invasions, they are usually strategic in planning and execution. 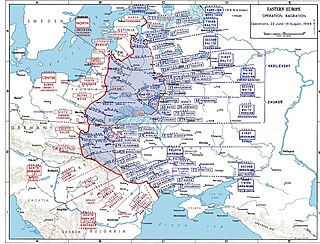 Operation Bagration was the codename for the 1944 Soviet Belorussian Strategic Offensive Operation a military campaign fought between 23 June and 19 August 1944 in Soviet Byelorussia in the Eastern Front of World War II. The Soviet Union destroyed 28 of 34 divisions of Army Group Centre and completely shattered the German front line. It was the biggest defeat in German military history and the fifth deadliest campaign in Europe, killing around 450,000 soldiers, while 300,000 others were cut off in the Courland Pocket. 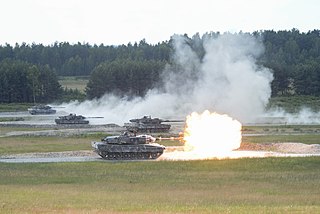 Annihilation is a military strategy in which an attacking army seeks to entirely destroy the military capacity of the opposing army. This strategy can be executed in a single planned pivotal battle, called a "battle of annihilation." A successful battle of annihilation is accomplished through the use of tactical surprise, application of overwhelming force at a key point, or other tactics performed immediately before or during the battle. 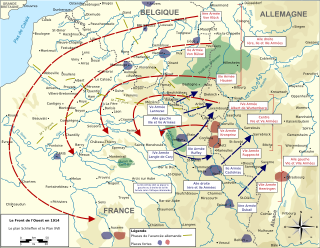 The cult of the offensive refers to a strategic military dilemma in which leaders believe that offensive advantages are so great that a defending force would have no hope of repelling the attack and therefore choose to attack. It is most often used to explain the causes of World War I and the subsequent heavy losses that occurred year after year, on all sides, during the fighting on the Western Front.

An offensive is a military operation that seeks through an aggressive projection of armed forces to occupy territory, gain an objective or achieve some larger strategic, operational, or tactical goal. Another term for an offensive often used by the media is 'invasion', or the more general 'attack'.

Defence in depth is a military strategy that seeks to delay rather than prevent the advance of an attacker, buying time and causing additional casualties by yielding space. Rather than defeating an attacker with a single, strong defensive line, defence in depth relies on the tendency of an attack to lose momentum over time or as it covers a larger area. A defender can thus yield lightly defended territory in an effort to stress an attacker's logistics or spread out a numerically superior attacking force. Once an attacker has lost momentum or is forced to spread out to pacify a large area, defensive counter-attacks can be mounted on the attacker's weak points, with the goal being to cause attrition or drive the attacker back to its original starting position.