Counties (simplified Chinese :县; traditional Chinese :縣; pinyin :Xiàn), formally county-level divisions, are found in the third level of the administrative hierarchy in Provinces and Autonomous regions and the second level in municipalities and Hainan, a level that is known as "county level" and also contains autonomous counties, county-level cities, banners, autonomous banners and City districts. There are 1,355 counties in Mainland China out of a total of 2,851 county-level divisions.

The term xian is sometimes translated as "district" or "prefecture" when put in the context of Chinese history.

Xian have existed since the Warring States period and were set up nationwide by the Qin Dynasty. [1] [2] The number of counties in China proper gradually increased from dynasty to dynasty. As Qin Shi Huang reorganized the counties after his unification, there were about 1,000. Under the Eastern Han Dynasty, the number of counties increased to above 1,000. About 1400 existed when the Sui dynasty abolished the commandery level (郡 jùn), which was the level just above counties, and demoted some commanderies to counties. The current number of counties mostly resembled that of the later years of Qing Dynasty. Changes of location and names of counties in Chinese history have been a major field of research in Chinese historical geography, especially from the 1960s to the 1980s.[ citation needed ]

In Imperial China, the county was a significant administrative unit because it marked the lowest level of the imperial bureaucratic structure;[ citation needed ] in other words, it was the lowest level that the government reached. Government below the county level was often undertaken through informal non-bureaucratic means, varying between dynasties. The head of a county was the magistrate, who oversaw both the day-to-day operations of the county as well as civil and criminal cases.

Main article: Autonomous counties of the People's Republic of China

Autonomous counties (自治县; zìzhìxiàn) are a special class of counties in Mainland China reserved for non-Han Chinese ethnic minorities. Autonomous counties are found all over China, and are given, by law, more legislative power than regular counties.

There are 117 autonomous counties in Mainland China.

As the Communist Party of China is central to directing government policy in Mainland China, every level of administrative division has a local CPC Committee. A county's is called the CPC County Committee (中共县委) and the head called the Secretary (中共县委书记), the de facto highest office of the county. Policies are carried out via the People's government of the county, and its head is called the County Governor (县长). The governor is often also one of the deputy secretaries in the CPC Committee. 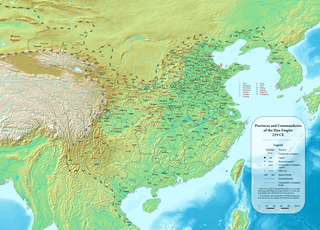 A jùn (郡) was a historical administrative division of China from the Eastern Zhou until the early Tang dynasty. It is usually translated as a commandery.

Fuzhou, also known as Gandong, is a prefecture-level city in the northeastern part of Jiangxi province, People's Republic of China. 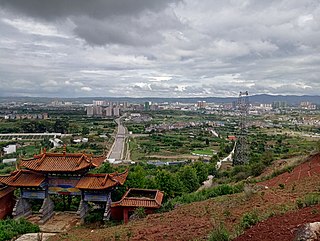 Shilin Yi Autonomous County is an autonomous county, under the jurisdiction of Kunming, the capital of Yunnan province, China.

Yuanyang County is a county under the administration of the prefecture-level city of Xinxiang, in the north of Henan province, China. 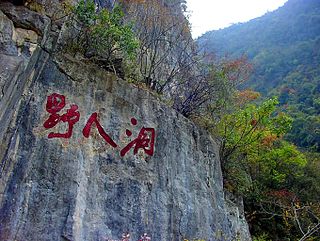 Fang County or Fangxian is a county of northwestern Hubei province, People's Republic of China. It is under the administration of Shiyan City.

Yunxi County is a county in the northwest of Hubei province, China, bordering Shaanxi province to the north and the west. It is under the administration of the prefecture-level city of Shiyan. The county spans a total area of 3,509.6 square kilometres (1,355.1 sq mi), and has a population of 447,482 as of 2010.

Jingzhou Miao and Dong Autonomous County is an autonomous county of Miao and Dong peoples in Hunan Province, China, the county is under the administration of the prefecture-level city of Huaihua. It was known as "Jing County", renamed to the present name on February 19, 1987. 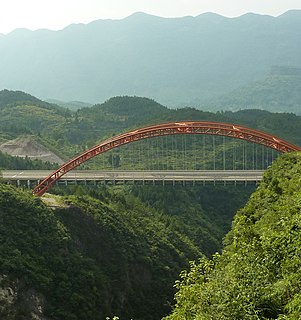 Zhao Zhiyong is a former Chinese politician, banker, and regional official. He served as the Vice Governor of Jiangxi province between March 2002 to June 2008, and Communist Party Secretary of Jiujiang, from June 2005 to November 2006. He also served as Secretary-General of Jiangxi Provincial Party Committee (江西省委秘书长) from 2008 until June 2014, when he was dismissed for corruption. 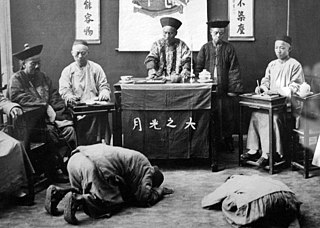 County magistrate sometimes called local magistrate, in imperial China was the official in charge of the xian, or county, the lowest level of central government. The magistrate was the official who had face-to-face relations with the people and administered all aspects of government on behalf of the emperor. Because he was expected to rule in a disciplined but caring way and because the people were expected to obey, the county magistrate was informally known as the Fumu Guan, the "Father and Mother" or "parental" official.