County Down (Irish : Contae an Dúin) is one of the six counties of Northern Ireland, one of the nine counties of Ulster and one of the traditional thirty-two counties of Ireland. [4] [5] It covers an area of 961 sq mi (2,490 km2) and has a population of 531,665. It borders County Antrim to the north, the Irish Sea to the east, County Armagh to the west, and County Louth across Carlingford Lough to the southwest.

In the east of the county is Strangford Lough and the Ards Peninsula. The largest town is Bangor, on the northeast coast. Three other large towns and cities are on its border: Newry lies on the western border with County Armagh, while Lisburn and Belfast lie on the northern border with County Antrim. Down contains both the southernmost point of Northern Ireland (Cranfield Point) and the easternmost point of Ireland (Burr Point).

In March 2018, The Sunday Times published its list of Best Places to Live in Britain, including five in Northern Ireland. The list included three in County Down: Holywood, Newcastle, and Strangford. [7]

County Down takes its name from dún, the Irish word for dun or fort, which is a common root in Gaelic place names (such as Dundee, Dunfermline and Dumbarton in Scotland and Donegal and Dundalk in Ireland). [8] The fort in question was in the historic town of Downpatrick, originally known as Dún Lethglaise ("fort of the green side" or "fort of the two broken fetters"). [9] [10]

During the 2nd century the region was home to the Voluntii tribe, according to Ptolemy. From the 400s-1177 County Down formed a central part of the kingdom of Ulaid. Ulaid was a frequent target of Viking raids in the eighth and ninth centuries, however fierce local resistance prevented the Norse from setting up permanent settlements in the region. In 1001 a fleet led by Sigtrygg Silkbeard raided much of the region in retribution for the Ulaiden's refusal to offer him sanctuary from Brian Boru the previous year.

The region was invaded by the Normans in 1177. From the 1180s-1600s the region would see waves of English and Scottish immigration. In 1569 the Irish Parliament passed "An Act for turning of Countries that be not yet Shire Grounds into Shire Grounds". [11] In 1570 a commission was issued in pursance of that statute "to survey and make enquiry in the countries and territories ... that are not shire ground, or are doubtful to what shire they belong; to limit and nominate them a shire or county; to divide them into countries, baronies or hundreds, or to join them to any existing shire or barony" "for the countries or territories of Arde, [lower-alpha 1] as well this side Blackstafe [lower-alpha 2] as the other side, Copelande islands, [lower-alpha 3] the Dufferin, [lower-alpha 4] Clandeboy, [lower-alpha 5] Kilultoghe, the Glynes [lower-alpha 6] with the Raughlines, [lower-alpha 7] Momerie and Carie, [lower-alpha 8] the Rowte M'William (M'Quillan) [lower-alpha 9] and all lands between lough Coine [lower-alpha 10] and lough Eaghe, [lower-alpha 11] and the water of Strangforde and the Banne. [lower-alpha 12] To certify their proceedings before the 1st August." [12] [13] The county was privately planted during the Plantation period (16th-17th centuries). During the Williamite War in Ireland (1689–1691) the county was a centre of Protestant rebellion against the rule of the Catholic James II. After forming a scratch force the Protestants were defeated by the Irish Army at the Break of Dromore and forced to retreat, leading to the whole of Down falling under Jacobite control. Later the same year Marshal Schomberg's large Williamite expedition arrived in Belfast Lough and captured Bangor. After laying siege to Carrickfergus, Schomberg marched south to Dundalk Camp, clearing County Down and much of the rest of East Ulster of Jacobite troops.

The county has a coastline along Belfast Lough to the north and Carlingford Lough to the south (both of which have access to the sea). Strangford Lough lies between the Ards Peninsula and the mainland. Down also contains part of the shore of Lough Neagh. Smaller loughs include Lough Island Reavy and Castlewellan Lake near Castlewellan, Clea Lough near Killyleagh, Lough Money and Loughinisland near Downpatrick and, within the Mourne Mountains, Silent Valley Reservoir, Ben Crom Reservoir, Spelga Dam and Lough Shannagh.

The River Lagan forms most of the border with County Antrim. The River Bann also flows through the southwestern areas of the county. Other rivers include the Clanrye and Quoile.

There are several islands off the Down coast: Mew Island, Light House Island and the Copeland Islands, all of which lie to the north of the Ards Peninsula. Gunn Island lies off the Lecale coast. In addition, there are a large number of small islands in Strangford Lough.

County Down is where, in the words of the song by Percy French, "The mountains of Mourne sweep down to the sea", and the area around the granite Mourne Mountains continues to be known for its scenery. Slieve Donard, at 849 m (2,785 ft), is the highest peak in the Mournes, in Northern Ireland and in the province of Ulster. Another important peak is Slieve Croob, at 534 m (1,752 ft), the source of the River Lagan.

Main article: List of civil parishes of County Down

The county was administered by Down County Council from 1899 until the abolition of county councils in Northern Ireland in 1973. [24] County Down is now served by the following local government districts:

The Down County Board administers Gaelic games in the county. Down is the most successful team north of the border in terms of All-Ireland Senior Football Championships won with five (1960, 1961, 1968, 1991 and 1994) in total. In terms of Ulster, they share that accolade with Cavan who also have 5 titles. They currently have four minor All-Ireland titles, twelve Ulster titles and one under 21 all Ireland title (1979). The Ards peninsula is a hurling stronghold.

County Down is also home to the No.1-ranked golf course, Royal County Down Golf Club, in not just Ireland, but the entire Great Britain, according to Today's Golfer . [25] [26]

Former No.1 golfer in the world, Rory McIlroy, [27] originates from Holywood, which is situated in the north of the county.

"Star of the County Down" is a popular Irish ballad.

The county is named in the lyrics of the song "Around the World", from the film Around the World in 80 Days , which was an American top ten hit for Bing Crosby and UK top ten hit for Ronnie Hilton, both in 1957, although it was Mantovani's instrumental version which was actually used in the film. Rihanna's video "We Found Love" was filmed there in 2011, causing complaints when the singer removed her clothes to reveal a bikini. [28]

The Ulster singer Van Morrison has made reference to the County Down in the lyrics to several songs including "Northern Muse (Solid Ground)", "Mystic of the East" and the nostalgic "Coney Island", which names several places and landmarks in the county. Van Morrison also covered "Star of the County Down" with The Chieftains as a part of their collaboration album Irish Heartbeat .

C.S. Lewis, author of The Chronicles of Narnia, was inspired by the Mourne Mountains. There is a Narnia trail in Kilbroney Park, in Rostrevor. [29]

Sam Hanna Bell based his novel of Ulster rural life, December Bride (1951) in the Ards peninsula. A film version of the novel, also called December Bride , was produced in 1990 and released in November 1991.

The Academy award winning short film The Shore (2011) was filmed in and around Killough bay by director/writer Terry George and his daughter Oorlagh. The film starred Ciaran Hynds, Kerry Condon and Connleth Hill. [32]

Downpatrick is a town in County Down, Northern Ireland. It is on the Lecale peninsula, about 21 mi (34 km) south of Belfast. In the Middle Ages, it was the capital of the Dál Fiatach, the main ruling dynasty of Ulaid. Its cathedral is said to be the burial place of Saint Patrick. Today, it is the county town of Down and the joint headquarters of Newry, Mourne and Down District Council. Downpatrick had a population of 10,822 according to the 2011 Census.

Newtownards is a town in County Down, Northern Ireland. It lies at the most northern tip of Strangford Lough, 10 miles (16 km) east of Belfast, on the Ards Peninsula. It is in the civil parish of Newtownards and the historic baronies of Ards Lower and Castlereagh Lower. Newtownards is in the Ards and North Down Borough. The population was 28,050 in the 2011 Census.

Strangford Lough is a large sea loch or inlet in County Down, in the east of Northern Ireland. It is the largest inlet in Ireland and the British Isles, covering 150 km2 (58 sq mi). The lough is almost fully enclosed by the Ards Peninsula and is linked to the Irish Sea by a long narrow channel at its southeastern edge. The main body of the lough has at least seventy islands along with many islets (pladdies), bays, coves, headlands and mudflats. Historically it was called 'Lough Coan', while 'Strangford' referred to the narrow sea channel. It is part of the 'Strangford and Lecale' Area of Outstanding Natural Beauty. Strangford Lough was designated as Northern Ireland's first Marine Conservation Zone in 2013, and has been designated a Special Area of Conservation for its important wildlife.

Killyleagh is a village and civil parish in County Down, Northern Ireland. It is on the A22 road between Belfast and Downpatrick, on the western side of Strangford Lough. It had a population of 2,483 people in the 2001 Census. It is best known for its twelfth century Killyleagh Castle. Killyleagh lies within the Newry, Mourne and Down district. 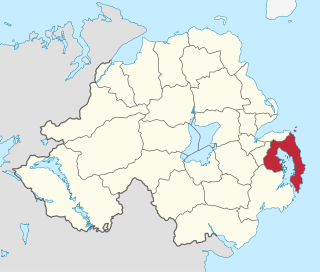 Ards was a local government district in Northern Ireland with the status of borough. It was one of twenty-six districts formed on 1 October 1973, and had its headquarters in Newtownards. It was merged with neighbouring North Down on 1 May 2015 to form the new Borough of Ards and North Down. Other towns in the defunct Borough included Portaferry, Comber, and Donaghadee, and the population of the area was 78,078 according to the 2011 census.

The Diocese of Down and Connor, is a Latin Church ecclesiastical territory or diocese of the Catholic Church in Northern Ireland. It is one of eight suffragan dioceses in the ecclesiastical province of the metropolitan Archdiocese of Armagh. The present bishop is Noel Treanor.

The A20 is a road in County Down in Northern Ireland. It runs from Belfast to Newtownards and on to Portaferry. 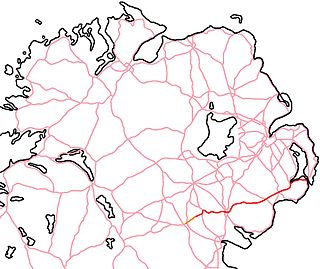 The A25 is the name given to the sections of the main route connecting Strangford with Castleblayney that lie in Northern Ireland. It is a road of regional importance, serving much of south Armagh and south Down. The road commences in the village of Strangford, on the shores of Strangford Lough, from which the Portaferry - Strangford Ferry service transports vehicles to Portaferry on the Ards peninsula. The entirety of the route is 61.2 miles, of which 54.5 miles are located north of the border, forming the A25 - the remaining 6.7 miles form the R182 in the Republic of Ireland.

Lecale is a peninsula in the east of County Down, Northern Ireland. It lies between Strangford Lough and Dundrum Bay. In the Middle Ages it was a district or túath in the Gaelic Irish kingdom of Ulaid, then became a county in the Anglo-Norman Earldom of Ulster. Later it became a barony, which was split into Lecale Lower and Lecale Upper by 1851. Its largest settlement is the town of Downpatrick. Other settlements include Ardglass, Killough and Strangford. The peninsula has a high concentration of tower houses. Much of it is part of the 'Strangford and Lecale' Area of Outstanding Natural Beauty.

Downtown Radio is a Hot Adult Contemporary music radio station based in Newtownards, County Down, that serves all of Northern Ireland using a network of AM, FM and DAB transmitters.

Wikimedia Commons has media related to County Down .

Wikivoyage has a travel guide for County Down .
This page is based on this Wikipedia article
Text is available under the CC BY-SA 4.0 license; additional terms may apply.
Images, videos and audio are available under their respective licenses.