Last updated January 15, 2020
Not to be confused with Bowthorpe Oak.
Tree in England

The Cowthorpe Oak was an oak tree in Cowthorpe, North Yorkshire, England. Renowned for its age and size it was sketched by the artist J. M. W. Turner. At its greatest extent its canopy was said to cover 0.5 acres (0.20 ha) of land. The tree declined in the late 18th century and lost several of its leading branches. By 1822 many of its branches were almost completely rotten and it had been supported with wooden props. The tree fell in 1950, apparently after having been struck by lightning.

The oak has traditionally been said to date from before the 1066 Norman Conquest or to early Roman times. [1] [2] It became famous for its age and size and, according to Julian Hight, William Shakespeare described it in As You Like It (c. 1600) as "An oak whose boughs were mossed with age, and high top bald with dry antiquity". [3] It was later described as 1,600 years old by Dr Alexander Hunter in John Evelyn's Sylva, or A Discourse of Forest-Trees and the Propagation of Timber in circa 1860, he stated "compared with this, all other trees are children of the forest". [2] [3] Cowthorpe's St Michael's Church was constructed nearby and a public house was named Ye Old Oak Inn after the tree. [4] At its greatest extent its canopy was said to cover 0.5 acres (0.20 ha) of land. [2] In the early 19th century the tree was owned by Charles Stourton, 17th Baron Stourton and then The Honorable Mr Petre. [2] The tree was sketched by J. M. W. Turner. [1]

The Cowthorpe oak was photographed in 1904 and appeared to be in good health, though it was heavily propped. [3] The tree died in 1950, apparently having been struck by lightning. [1] [4] At this time it was said to be England's oldest tree. [1] The remains of the tree were removed by Ian Watson as it had become unsafe. [4]

The tree's lineage survives as several of its acorns were sent to New Zealand to be planted there. [4] One of these, planted at Drury in the 1870s, is now known as the Runciman Oak and has a circumference of almost 5 metres (16 ft) measured at a height of 0.5 metres (1.6 ft) from ground level. [3] The Runciman Oak also has many descendants, planted in an avenue nearby. [4]

The Wye Oak was the largest white oak tree in the United States and the State Tree of Maryland from 1941 until its demise in 2002. Wye Oak State Park preserves the site where the revered tree stood for more than 400 years in the town of Wye Mills, Talbot County, Maryland. 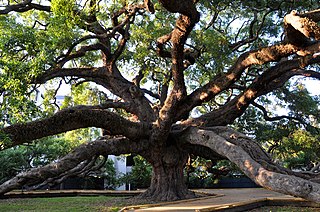 The Treaty Oak is an octopus-like Southern live oak in Jacksonville, Florida. The tree is estimated to be 250 years old and may be the single oldest living thing in Jacksonville, predating the founding of the city by Isaiah Hart during the 1820s. It is located in Treaty Oak Park in the Southbank area of Downtown Jacksonville.

The Mingo Oak was a white oak in the U.S. state of West Virginia. First recognized for its age and size in 1931, the Mingo Oak was the oldest and largest living white oak tree in the world until its death in 1938.

Hooker Oak was an extremely large valley oak tree in Chico, California. Amateur botanist and local socialite Annie Bidwell, whose husband had founded Chico, named the tree in 1887 after English botanist and Director of the Royal Botanical Gardens Sir Joseph Dalton Hooker. It was featured in the 1938 film The Adventures of Robin Hood starring Errol Flynn. The tree fell in 1977 and portions of the wood was later milled for use by local artisans.

The Great Banyan is a banyan tree located in Acharya Jagadish Chandra Bose Indian Botanic Garden, Howrah, near Kolkata, India. The great banyan tree draws more visitors to the garden than its collection of exotic plants from five continents. Its main trunk became diseased after it was struck by two cyclones, so in 1925 the main trunk of the tree was amputated to keep the remainder healthy; this has left it as a clonal colony, rather than a single tree. A 330-metre-long (1,080 ft) road was built around its circumference, but the tree continues to spread beyond it. 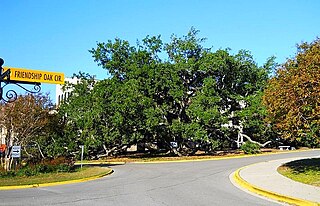 Friendship Oak is a 500-year-old southern live oak located on the Gulf Park campus of the University of Southern Mississippi in Long Beach, Mississippi. The campus was formerly Gulf Park College for Women from 1921 until 1971.

A part of tree measurement is measurement of the crown of a tree, which consists of the mass of foliage and branches growing outward from the trunk of the tree. The average crown spread is the average horizontal width of the crown, taken from dripline to dripline as one moves around the crown. The dripline being the outer boundary to the area located directly under the outer circumference of the tree branches. When the tree canopy gets wet, any excess water is shed to the ground along this dripline. Some listings will also list the maximum crown spread which represents the greatest width from dripline to dripline across the crown. Other crown measurements that are commonly taken include limb length, crown volume, and foliage density. Canopy mapping surveys the position and size of all of the limbs down to a certain size in the crown of the tree and is commonly used when measuring the overall wood volume of a tree.

Tree volume is one of many parameters that are measured to document the size of individual trees. Tree volume measurements serve a variety of purposes, some economic, some scientific, and some for sporting competitions. Measurements may include just the volume of the trunk, or the volume of the trunk and the branches depending on the detail needed and the sophistication of the measurement methodology.

Trees have a wide variety of sizes and shapes and growth habits. Specimens may grow as individual trunks, multitrunk masses, coppices, clonal colonies, or even more exotic tree complexes. Most champion tree programs focus finding and measuring the largest single-trunk example of each species. There are three basic parameters commonly measured to characterize the size of a single trunk tree: height, girth, and crown spread. Additional details on the methodology of Tree height measurement, Tree girth measurement, Tree crown measurement, and Tree volume measurement are presented in the links herein. A detailed guideline to these basic measurements is provided in The Tree Measuring Guidelines of the Eastern Native Tree Society by Will Blozan.

The Webster Sycamore was an American sycamore in the U.S. state of West Virginia. Long recognized for its size, the Webster Sycamore was the largest living American sycamore tree in West Virginia until its felling in 2010. The tree stood approximately 4.5 miles (7.2 km) east of Webster Springs in Webster County, in a moist flood plain along the banks of the Back Fork Elk River, a tributary stream of the Elk River.

The Wallace Oak was an oak tree that stood in Elderslie, Renfrewshire. It is reputed to have seeded around 1100 and by the late 13th-century grew on the estate of Scottish independence leader William Wallace's father. Wallace is reputed to have hidden himself within the tree to escape from English soldiers. The tree was damaged by the removal of wood to make souvenirs in the 19th-century and it fell during a storm in 1856.

The Allerton Oak is a sessile oak tree in Calderstones Park, Liverpool. It is thought to be around 1,000 years old and is described as the oldest oak in North West England. It is reputed to have been the setting for a medieval hundred court and said to have been damaged in an 1864 gunpowder explosion. The tree won the 2019 English Tree of the Year competition and has been entered into the 2020 European Tree of the Year competition.

The Wallace Oak was a tree in Torwood, Scotland. it is thought to have been part of the Torwood ancient woodland and has been linked to pre-Christian druidic worship. The tree became associated with the Scottish independence leader William Wallace. Its hollow trunk is reputed to have served him as a headquarters, hiding place and sleeping quarters. By the 17th-century the tree was being used to make souvenirs due to its association with Wallace. By 1830 it was described as badly affected by the removal of timber, being reduced to a single stump. Timber being scarce above ground its roots were also dug up for souvenirs and the tree was dead by 1835.

The Caton Oak was an ancient oak tree that stood in Caton, Lancashire, reputedly dating from the time of the druids. The oak tree stood atop a set of steps known as the "Fish Stones" that were used by medieval monks to display salmon for sale. The tree declined during the 20th century and was reinforced with a metal support; an acorn from the tree was planted in 2007 to grow a replacement. The original Caton Oak fell on 20 June 2016.

The Parliament Oak is a veteran tree in Sherwood Forest. It is reputed to have been the site for impromptu-parliaments held by kings John and Edward I. In the 19th century the tree was propped-up by William Bentinck, 4th Duke of Portland. In recent years the Parliament Oak was threatened by fly-tipping and competing vegetation but was subject to conservation work in 2008. The tree was shortlisted for the 2017 Woodland Trust Tree of the Year award.

Robin Hood's Larder was a veteran tree in Sherwood Forest that measured 24 feet (7.3 m) in circumference. The tree had long been hollow and is reputed to have been used by the legendary outlaw Robin Hood and others as a larder for poached meat. It was badly burnt by fire in the late 19th century and again in 1913. The tree fell in a gale in 1961 and no trace of it remains. 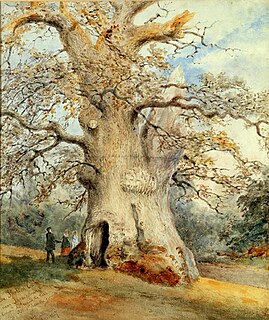 The Shelton Oak also known as Owen Glendwr's Observatory or the Glendower Oak was a veteran oak tree near Shrewsbury, England. It may be the "grette Oak at Shelton" mentioned in a document from the time of Henry III (1216-1272). The oak is said to have been climbed Owain Glyndŵr, the Welsh independence fighter, to view the 1403 Battle of Shrewsbury, from which its alternative name derives. In later years the tree became renowned for its hollow trunk which was variously described as able to accommodate twenty people, six people sitting for dinner or an 8-person quadrille dance. The tree had fallen by 1940 and its remains were removed in the 1950s to facilitate improvements to an adjacent road junction.