Cristina Kahlo y Calderón was born June 7, 1908, and was the youngest daughter of the Kahlo family. [3] Her parents were Guillermo Kahlo and Matilde Calderón. Guillermo Kahlo, who worked as a photographer, had a previous marriage in which he had two children before his wife died. Cristina and Frida had two other sisters, named Matilde and Adriana, and two half sisters named María Luisa and Margarita. [4] Cristina was eleven months younger than Frida, [3] and the pair were very close. The Kahlo y Calderón family lived in a house built by Guillermo in Coyoacán, Mexico. [4]

Cristina came from a meager background but her father, Guillermo, a photographer during the Mexican Revolution when there was hardly a market for photographs, provided for her education.

Cristina later married and had two children, Isolda and Antonio. Cristina's husband left her after the birth of Antonio. When Frida and Diego Rivera returned to Mexico as successful painters, Cristina acted as subject for both artists. [4] She was one of Diego's favorite subjects, and he often painted her in the nude. [3] Soon after her husband left, Cristina and Diego began an affair. [4]

Cristina and Frida were very close, [3] and Frida used Cristina as an indirect and direct subject for some of her paintings. Frida painted Portrait of Cristina Kahlo near the start of Frida's career. Art historians note this painting's stylistic similarities to that of Diego's style. After this painting, Frida was able to find her own stylistic preferences. [4]

In Frida's painting Mi Nodriza y yo ("My wet-nurse and I") Cristina, although not in the painting, is its subject. The painting depicts Frida being breastfed by a wet-nurse as opposed to her own mother, because when Frida's mother became pregnant with Cristina she could no longer breastfeed Frida. [3] Cristina is also an indirect subject of Frida's 1937 painting Memory, the Heart , a self-portrait displaying Frida with a metal rod going through an empty space in her chest. Art historians have suggested that this symbolizes "displacement of penetration." In other words symbolizing Cristina's affair with Diego. The pole replacing her heart, which lays wounded and bleeding on the ground, also shows the immense pain which was the result of the affair. [5]

Rivera portrays Cristina in his art work, and she was one of his favorite models. [3] Cristina was depicted on the South Wall of Rivera's mural The History of Mexico: The World of Today and Tomorrow . She lies at the bottom of the mural alongside her children and Frida. This could be an indication of her importance to Diego. [3] Pairing Frida and Cristina and her children showed the contradictions between the two. Frida appears statuesque while Cristina appears "lively." Another contradiction was the aspect of Cristina being his lover and Frida his wife; and in addition Cristina had children and Frida did not. [6]

Cristina and her children lived with Diego and Frida as a family. Towards the end of Frida's life, Cristina looked after her and made her as comfortable as possible. [4] After Frida's death, Cristina lived her life separate from Diego. Diego turned Cristina and Frida's childhood house La Casa Azul in Coyoacán into a museum of Frida's work, though this didn't please Cristina. [7]

The novel, Frida (2001) by Barbara Mujica is narrated from the point of view of Cristina Kahlo. [8] 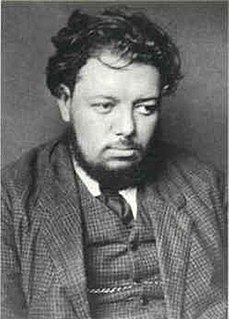 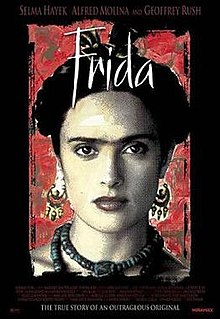 Frida is a 2002 American biographical drama film directed by Julie Taymor which depicts the professional and private life of the surrealist Mexican artist Frida Kahlo. 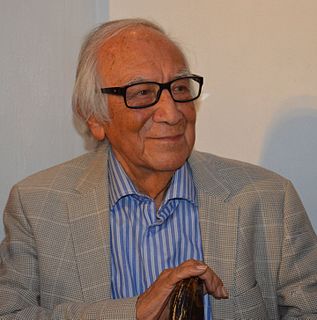 Guillermo Kahlo was a German-Mexican photographer. He photographically documented important architectural works, churches, streets, landmarks, as well as industries and companies in Mexico at the beginning of the 20th century; because of this, his work has not only artistic value but also historical and documental importance. He was the father of painter Frida Kahlo. 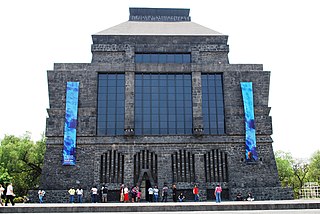 The Museo Diego Rivera Anahuacalli or simply Anahuacalli Museum is a museum located in Coyoacán, in the south of Mexico City.

Fanny Rabel, born Fanny Rabinovich, was a Polish-born Mexican artist who is considered to be the first modern female muralist and one of the youngest associated with the Mexican muralism of the early to mid 20th century. She and her family arrived to Mexico in 1938 from Europe and she studied art at the Escuela Nacional de Pintura, Escultura y Grabado "La Esmeralda", where she met and became friends with Frida Kahlo. She became the only female member of “Los Fridos” a group of students under Kahlo’s tutelage. She also worked as an assistant and apprentice to Diego Rivera and David Alfaro Siqueiros, painting a number of murals of her own during her career. The most significant of these is "Ronda en el tiempo" at the Museo Nacional de Antropología in Mexico City. She also created canvases and other works, with children often featured in her work, and was one of the first of her generation to work with ecological themes in a series of works begun in 1979.

Aurora Reyes Flores was a Mexican artist, known as a painter and writer, and she was the first female muralist in Mexico and first exponent of Mexican muralism. She also went by the name Aurora Reyes. 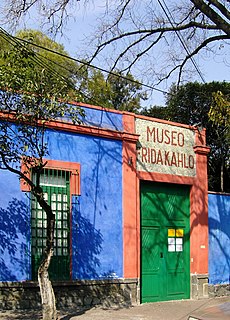 The Frida Kahlo Museum, also known as the Blue House for the structure's cobalt-blue walls, is a historic house museum and art museum dedicated to the life and work of Mexican artist Frida Kahlo. It is located in the Colonia del Carmen neighborhood of Coyoacán in Mexico City. The building was Kahlo's birthplace, the home where she grew up, lived with her husband Diego Rivera for a number of years, and where she later died in a room on the upper floor. In 1957, Diego Rivera donated the home and its contents in order to turn it into a museum in Frida's honor.

Esperanza Martínez (1934–1998) was a Mexican-born painter who lived in Southern California. She was known for portraits and genre scenes of rural Mexican farmers, formal portraits of prominent Mexican-Americans and pastel paintings of Native American subjects. As a precocious young artist, Martinez studied with the famous Mexican muralist Diego Rivera. She moved to the Los Angeles area in 1963 and lived with her family in Hacienda Heights. Martinez died from cancer in 1998.

Rina Lazo Wasem was a Guatemalan-Mexican painter, who began her career in mural painting with Diego Rivera as his assistant. She worked with him from 1947 until his death in 1957 on projects both in Mexico and Guatemala. Thereafter she remained an active painter, better known for her mural works than canvases although the latter have been exhibited in Mexico and other countries making her one of Guatemala's better known artists. She was a member of the Mexican muralism movement and while she criticized modern artists as too commercial and not committed to social causes. She believed muralism would revive in Mexico because of its history. 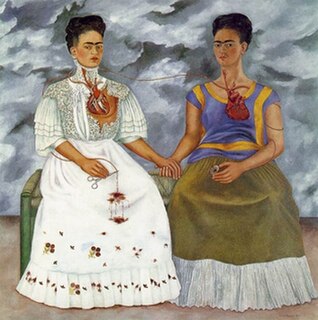 The Two Fridas is an oil painting by Mexican artist Frida Kahlo. The painting was the first large-scale work done by Kahlo and is considered one of her most notable paintings. It is a double self-portrait, depicting two versions of Kahlo seated together. One is wearing a white European-style Victorian dress while the other is wearing a traditional Tehuana dress. The painting is housed at the Museo de Arte Moderno in Mexico City.

The History of Mexico mural in the stairwell of the National Palace in Mexico City was executed between 1929 and 1935 by Diego Rivera. The subject of the mural is Mexico's history from ancient times to the present. They depict the many struggles of the common Mexican people to fight against the Spanish, the French, and the dictators that controlled the country at different points in its history.

Self-Portrait with Thorn Necklace and Hummingbird is a 1940 painting by Mexican painter Frida Kahlo.

The Wounded Deer is an oil painting by Mexican artist Frida Kahlo created in 1946. It is also known as The Little Deer. Through The Wounded Deer, Kahlo shares her enduring physical and emotional suffering with her audience, as she did throughout her creative oeuvre. This painting in particular was created towards the end of Kahlo's life, when her health was in decline. Kahlo combines pre-Columbian, Buddhist, and Christian symbols to express her wide spectrum of influences and beliefs.

The Love Embrace of the Universe, the Earth (Mexico), Myself, Diego, and Señor Xolotl is a 1949 painting by Frida Kahlo. Created in Mexico, the 70cm x 60.5cm painting was painted with oil on Masonite. 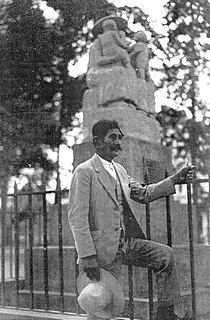 Mardonio Magaña-Camacho (c.1865–1947) also known as Magañita, was a Mexican educator and sculptor known for his folk art stone direct carvings, he was also known to work with wood and mud. He was a self-taught artist inspired by nature, that was "discovered" by artist Diego Rivera. It's said that Diego Rivera was quoted as saying Magaña was, "the greatest contemporary Mexican sculptor". 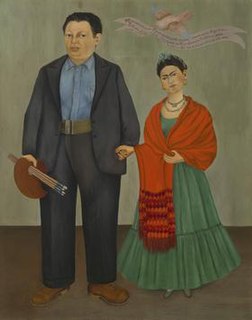