A nurse working the night shift in a psycho ward begins to lose his grip on reality.

The film was based on a script by Thomas Hedley, later famous for writing Flashdance. [2]

In May 1977 James Coburn was attached to the project with John Huston as director. [3]

The film was shot in Vancouver. [4] It was part of the boom in Canadian production due to tax concessions. [5] An article later called 1980 " a year of national horror and shame" for the Canandian film industry, other efforts including Middle Aged Crazy and Circle for Two. [6] Reportedly $500,000 came from the CFDC. [7]

It was one of five films Coburn made over an 18-month period. "Something happened between the first script and the final re-write," he says of Patman. "In being made clearer, the film lost a lot of its charm and character. But the idea of a guy who works in a psychiatric ward, ultimately choosing to live in the madness there rather than the madness in the outside world, really appealed to me." [1]

Kate Nelligan was Canadian, though based in New York where she had achieved great stage success. She agreed to return home to make the movie and help the film be classified as Canadian. Nelligan later called the movie a nightmare, saying in 1983 that "The Canadian film industry is a joke, and we Canadians should be ashamed of it. We passed a silly law to keep out American film professionals, from whom we might have learned something, and to assure that every incompetent film person in Canada could have a job. What we got were horribly incompetent people in top jobs, drunk most of the time, who went to Hollywood and got completely taken in by every agent in town, and in turn screwed every dentist in Canada out of $5,000 in tax-shelter investments. The boom seems to be over now. It was such a monstrous waste of time and money. I can say all that stuff, of course, because I'm Canadian." [8]

The film was screened at the 1980 Toronto Film Festival. [9] [4] Reviewing it at the festival the Globe and Mail called the film "an honorable failure, honorable because its ambitions are lofty, and a failure because the ambitions are not tied to anything cinematically coherent - if Mr. Patman were literature, it would be a haiku unconscionably puffed into a short story. As a movie, it's a fragile featurette turned into an attenuated feature. Certainly it's good to want to say something, as Mr. Patman clearly does; it's even better to have something to say." [10]

Maclean's said "just when Mr. Patman threatens to turn too heartwarming, it holds back and we respond to it without that put-upon feeling that we’re being coaxed into caring. It’s a thin line to tread but the director, John Guillermin... keeps a tight grip on the material, and the material has been shrewdly arranged, motifs and all, to tear your heart out." [11]

An article in the Toronto Star from 2001 said "This notable dud was a product of Canada's notorious tax-shelter era when movies were for business write-offs rather than any creative imperative. Shot in Vancouver, it never lets the audience know where we are. A feeble echo of One Flew Over The Cuckoo's Nest , the movie had a British director (John Guillermin) and an American star (James Coburn). The screenwriter took his name off it after a dispute with producer Bill Marshall (one of the festival's founders). The movie had a gala slot at the 1980 festival, followed by a quick burial." [12]

Filmink later called it "a really terrible movie, dull and lacking in atmosphere, the first bad picture Guillermin made in over a decade." [13]

North York is one of the six administrative districts of Toronto, Ontario, Canada. It is located directly north of York, Old Toronto and East York, between Etobicoke to the west and Scarborough to the east. As of the 2016 Census, it had a population of 869,401. 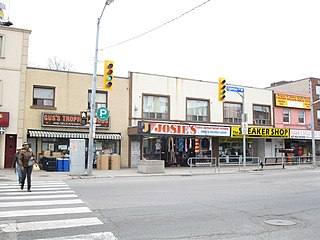 York is a former city within the current city of Toronto, Ontario, Canada. It is located northwest of Old Toronto, southwest of North York and east of Etobicoke, where it is bounded by the Humber River. The city has a population of 145,662 as of 2016.

Weston is a neighbourhood and former village in Toronto, Ontario, Canada. The neighbourhood is situated in the northwest of the city, south of Highway 401, east of the Humber River, north of Eglinton Avenue, and west of Jane Street. Weston Road just north of Lawrence Avenue is the commercial core of Weston, with many small businesses and services. Weston was incorporated as a village in the 19th century and was absorbed into the Borough of York in the late 1960s. York itself was amalgamated into Toronto in 1998. 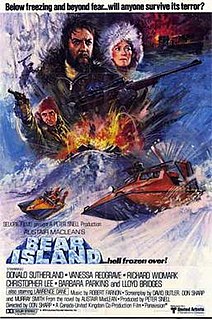 Bear Island is a 1979 thriller film loosely based on the 1971 novel Bear Island by Alistair MacLean. It was directed by Don Sharp and starred Donald Sutherland, Vanessa Redgrave, Richard Widmark, Christopher Lee and Lloyd Bridges.

Susan Douglas Rubeš C.M. was an Austrian-born Canadian actress and producer. She was sometimes credited as Susan Douglas or Susan Rubes. 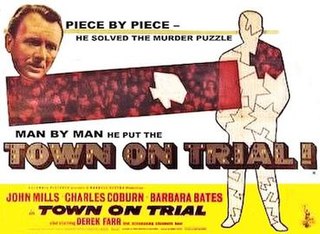 Forbidden Journey was a 1950 political thriller film situated in post-World War II Canada. A communist spy attempts to pass information to his uncle in Canada while spies try to hunt him down. It starred Jan Rubeš and his future wife Susan Douglas. The film premiered at the Princess Theater in Montreal, Quebec, Canada on September 22, 1950. The release did not sell well and had mixed reviews. It was criticized for insufficient excitement, weak villains and a poor plot and sound.

Ezra Schabas, was a Canadian musician, educator and author. He was active in Canada's musical life beginning in 1952, when he emigrated from Cleveland with his family. During his time in Canada, he was a leading musical educator, clarinetist, and administrator in Toronto's musical institutions. He wrote several books on Canadian and American musical history, and he was appointed to the Order of Ontario and made a Member of the Order of Canada.

The 5th Toronto International Film Festival (TIFF) took place in Toronto, Ontario, Canada between September 4 and September 13, 1980. That year the festival hold a retrospective in honor of Jean-Luc Godard, who himself attended the retrospective which was organized by festival programmer Peter Harcourt. A large crowd gathered outside University theatre to catch a glimpse of Bette Midler at the premiere of her film Divine Madness.

Jeannette Zarou is a Palestinian-born Canadian soprano. She was a lyric soprano with the Canadian Opera Company and the Deutsche Oper am Rhein, and has worked as an academic voice teacher at the Robert Schumann Hochschule in Düsseldorf.

The Tracker, also known as Dead or Alive in some countries, is a 1988 Western television film directed by John Guillermin, written by Kevin Jarre, and starring Kris Kristofferson, Scott Wilson, Mark Moses, David Huddleston, John Quade and Don Swayze. It premiered on HBO on March 26, 1988.

Henk Van der Kolk is a Canadian film producer, best known as a cofounder of the Toronto International Film Festival and the Academy of Canadian Cinema and Television.