Crowd Lu (Chinese :盧廣仲; pinyin :Lú Guǎngzhòng; born 15 July 1985) is a Taiwanese singer-songwriter and actor. He is also referred to as Vitas Lu after making a parody of the song Opera No. 2 by the Russian singer Vitas, having the ability to hit the same high notes. [1] Due to a serious car accident in his first year at Tamkang University, Lu learned to play guitar during his hospitalization. The following year, Lu won first prize for musical composition and solo performance and proceeded to once again take the gold in composition and become the crowd favorite at National Chengchi University.

Crowd Lu was raised in a household rich with culture and focused on the arts in Tainan City, Taiwan. His mother was a lover and collector of Western jazz records, which sparked a similar—if not greater—musical interest within Lu at a very young age. The glimmer of Lu's talent was apparent as he would belt out the songs of Whitney Houston and Michael Jackson only after listening to them once or twice. Lu's grandmother also contributed to his musical versality. His grandmother was a fan of local Taiwanese dramas and would sing theme songs from these dramas to Lu and his sister to coax them to sleep. It was most likely at this time that Lu developed his signature style- carefree, sincere, and youthful.

After graduating from the Tainan Guangming High School in 2003, Lu moved north to Taipei to attend Tamkang University. Although he intended on majoring in electrical engineering, due to his near fatal car accident, Lu was forced to switch his major to Spanish Literature.

In his first year at Tamkang University, Lu was run over by a bus and suffered severe injuries in both legs. As a result, Lu spent months in the hospital, during which he picked up the guitar and experimented with musical composition. The following year, Lu won first prize for musical composition and solo performance at a Tamkang University singing contest and proceeded to once again take the gold in composition and to become the crowd favorite at a similar contest at National Chengchi University. Lu caught the eye, and ears, of prominent music record producer Zhong Cheng Hu, and, with Zhong, produced three singles. Of them, "Good Morning, Beautiful Dawn!" appeared on the Taiwan Musical Society's Top Ten Singles in 2007. By mere word of mouth, Lu sold 15,000 CD's of his singles.

In late 2006, for a little more than a year, Lu toured all of Taiwan, hopping from diners to universities, and created a huge following, especially among university students.

In 2008, Lu ended his tour with 100 concerts and, on 25 May, came out with his first CD 100 Ways of Living. Filled with the simple honesty of everyday life, 100 Ways of Living topped the charts and altered the course of the heavily Mando-pop musical industry and taste in all of Asia dramatically.

In 2009, Lu's albums Seven Days (七天) and Live in Taipei International Convention Center (TICC) were both awarded one of the Top 10 Selling Mandarin Albums of the Year at the 2009 IFPI Hong Kong Album Sales Awards, presented by the Hong Kong branch of IFPI. [3]

Lu performed the theme song of the film Your Name Engraved Herein, the piece won Best Original Film Song at Taiwan's Golden Horse Film Festival and Awards. [4] As of August 2022, the music video has garnered more than 58 million views on YouTube. [5]

Jerry Yan, born Liao Yangzhen, is a Taiwanese actor, model and singer. He is well known for his lead role as Daoming Si in the Taiwanese dramas Meteor Garden and Meteor Garden II, an adaptation of a Japanese shōjō manga. He is also a former member of the boy band group F4.

F.I.R. is a Taiwanese pop rock band formed in 2004. The band consists of Lydia, Ian Chen (keyboards) and Real Huang. Producer Ian Chen formed his own band and recruited the other two members to form F.I.R. They are well known throughout Asia after their hit "Lydia", which gained popularity and was the theme song for the Taiwanese TV drama The Outsiders (鬥魚). The drama was aired in Taiwan without revealing the singer of the theme song. The song attracted many fans, which led to F.I.R.'s big success when they finally debuted in 2004. 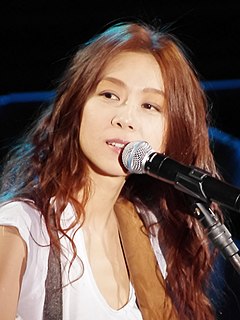 Cheer Chen Chi-chen is a Taiwanese singer-songwriter. Her most recent album, Sofa Sea, was released in 2018. 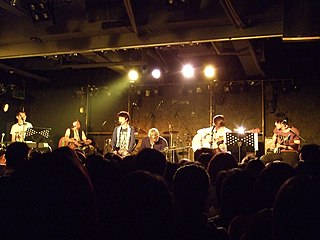 Sodagreen is a Taiwanese indie band formed in 2001. Its members have been unchanged since 2003. Sodagreen emerged in the Taiwanese indie music scene after receiving the Grand Jury Award in the Hohaiyan Gongliau Rock Festival in 2004, after which it signed a contract with Willlin Music. The band is the first indie band to hold a concert in the Taipei Arena.

Chen Da (also Chen Ta; Chinese: 陳達; pinyin: Chén Dá; Wade–Giles: Ch'en2 Ta2; b. 1905 (1906?) – d. April 11, 1981) was a Taiwanese folk singer. He was part of Taiwan's folk music scene and worked as an analphabetic creator of lyrics. His spontaneous performances of traditional tunes became an object of study for many scholars focused on the music of Taiwan and brought him to the attention of writers engaged in music criticism including the novelist Wang Tuoh. According to the Journal of Music in China, Chen Da was "the only noted singer of Taiwanese folk singing." Chen Da is also referred to as a singer of "Hoklo folk songs," a synonym of "Taiwanese folk songs."

Wang Shih-hsien is a Taiwanese singer and actor. 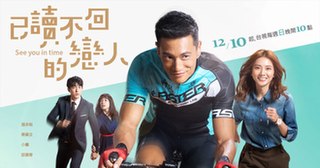 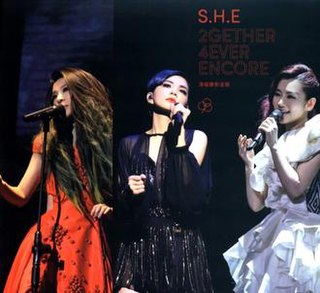 2gether 4ever Concert Encore Live is the Taiwanese girl group S.H.E's the 5th live album. It was released on July 10, 2015. The live album recorded the Taipei stop of their "2gether 4ever World Tour Encore". It also includes a bonus DVD of behind the scenes, and the special songs at other scenes of the tour concert.

Your Name Engraved Herein is a 2020 Taiwanese romantic drama directed by Patrick Kuang-Hui Liu and starring Edward Chen, Jing-Hua Tseng and Leon Dai. The film premiered in Taiwan on September 30, followed by a global release on Netflix on December 23. Your Name Engraved Herein is the highest-grossing LGBT film in Taiwan's history, as well as the most popular Taiwanese film of 2020, ultimately becoming the first gay-themed movie to exceed NT$100 million at the Taiwanese box office.

Erek Lin is a Taiwanese actor. Making his debut as a child actor in Starry Starry Night (2012), Lin has since gone on to star in various dramas and movies.

Lu Li'an is a scholar of British literature, professor at Fudan University, and president of the Shanghai Taiwan Compatriots Friendship Association. Born in Taiwan, she moved to mainland China in 1997 to teach at Fudan University in Shanghai and became a citizen of the People's Republic of China (PRC). In 2017, she was a delegate to the 19th National Congress of the Communist Party of China, and the same year, the Republic of China (ROC) government revoked her registered residency in Taiwan. 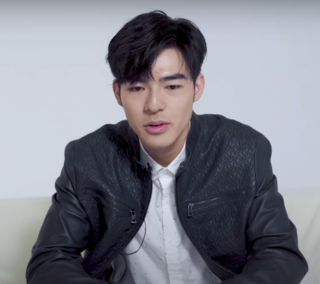 Chen Hao-sen, known by his English name Edward Chen, is a Taiwanese actor and singer. He is currently studying performing arts at Hsing Wu University. He is known for his roles in the 2017 drama series Red Balloon and the 2020 feature film Your Name Engraved Herein. For his role in Your Name Engraved Herein, Chen was nominated for Best New Performer at the 57th Golden Horse Awards.

Tan Boon Wah is a Singaporean songwriter. He is also a practicing real estate lawyer.

Yanis Huang is a Chinese songwriter and producer. He works in arrangement, harmonizing, production, movie soundtracks, live performances, and concert production. He won awards, such as “Best Arrangement of the Year” in Beijing Pop Music Awards, "Best Original Song” in Golden Horse Awards, and "Song of the Year” in Golden Melody Awards.

Wikimedia Commons has media related to Crowd Lu .
This page is based on this Wikipedia article
Text is available under the CC BY-SA 4.0 license; additional terms may apply.
Images, videos and audio are available under their respective licenses.