Crush Gear Turbo (Japanese: 激闘!クラッシュギアTURBO, Hepburn: Gekitō! Kurasshugia Tābo), also known just as Crush Gear, is an anime and manga series about people who throw mechanical vehicles into a large ring to fight and "crush" each other. The 68-episode anime series produced by Sunrise aired across Japan on the anime television network Animax, from October 7, 2001, to January 26, 2003. Magna Pacific released Crush Gear Turbo in English in Australia. [1] It was followed on by a spiritual successor, Crush Gear Nitro, which has also been aired across Japan by Animax.

In the Philippines, Crush Gear Turbo was translated in Filipino and premiered on ABS-CBN in 2003, with rebroadcasts on Studio 23 and Hero TV. The anime also aired on Cartoon Network in the Philippines with an English dub.

The manga was published in English by Chuang Yi.

The story follows Kouya Marino, a 5th-grade boy who loves Gear Fighting. His older brother, Yuhya Marino happens to be an Asia Cup Gear Fighter Champion and is qualified in the World Cup tournament when he died four years ago because of an accident.

Kouya's skills are nowhere near his brother's, and is nearly disqualified after arriving late for an elimination match in the Tobita Club. Most of the team members shift into the Manganji Club – a team created by one of the club's former members, Takeshi Manganji – causing his brother's Crush Gear Club faces the threat of extinction from the rival team.

Refusing to give up, Kouya challenges Takeshi. At first, he uses the Garuda Eagle from Yuhya, but is later destroyed in the middle of the Butokan Cup. Soon after, Kouya's teammate Kyousuke Jin created the Garuda Phoenix for him, and Kouya uses it throughout the Gear Fighting. Kouya has to find a way to reinstate the Tobita Club back to its former glory.

Planning for Crush Gear Turbo began in March 2001, with intent to begin airing in October 2001. Naotake Furusato, the producer of Crush Gear Turbo, received a toy car prototype that used two AA batteries and a motor. The toy car operated in circles instead of straight lines, and operators could cause them to collide with one another. Furusato used this concept to develop Crush Gear Turbo. According to Furusato the show was the first Sunrise production to "genuinely adopt the use of 3D graphics". Furusato added that the 3D rendering allowed the animators to "brilliantly express the stage presence of the Gear Fights" and incorporate effects not in real-life toy gears such as fireworks and smoke. According to Furusato 3D Production Chief Mitsuo Fukuda (福田 己津央, Fukuda Mitsuo) told Furusato that, because there are some elements that may only be expressed in 3D, the series ought to use 3D "to full effect". Furusato concluded that this caused the battle scenes to appear "a little bit unique". Furusato credited the customization and element attributes in each gear to Sunrise's "already well-established know-how". In addition the producer credited his own experience on Gear Fighter Dendoh and director Shūji Iuchi's experience on Mashin Hero Wataru in the formation of Crush Gear Turbo. [4]

Furusato intended for the creators of the series to "encourage children to think and place on value on things like friendship and trust in others" and for the series to express deepening human relationships. He added that the series "got kind of a Heisei Era [1989-2019] "Kyojin no Hoshi" and "Ashita no Joe" feeling to it" and that the current generation of children "are fundamentally a more cheerful lot and go in for a bit of a slapstick flavor". [4] 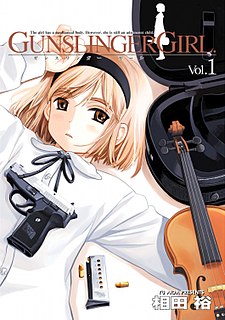 Gunslinger Girl is a Japanese manga series by Yu Aida. It began serialization on May 21, 2002 in Dengeki Daioh and ended on September 27, 2012. The chapters were also published in 15 tankōbon volumes by ASCII Media Works. Set in modern Italy, the series focuses on young cybernetic girls and their adult male handlers who use them as assassins under the directions of a government organization.

Clamp School Detectives a.k.a. CLAMP Campus Detectives is a manga series by Clamp, which was adapted into a 26-episode anime series, produced by Bandai Visual and Studio Pierrot. The manga series was serialized in Kadokawa Shoten's Monthly Asuka manga magazine between January 1992 and October 1993, spanning three tankōbon, while the anime premiered in Japan on TV Tokyo between May 3, 1997 and October 25, 1997.

Sgt. Frog, known in Japan as Keroro Gunso, is a Japanese manga series written and illustrated by Mine Yoshizaki. It was launched in Monthly Shōnen Ace in April 1999. The story follows the attempts of a platoon of frog-like alien invaders to conquer Earth. Sergeant Keroro, the titular character, is the leader of the platoon, but is at the mercy of a human family of three after being captured by them. Keroro is forced to do meaningless chores and errands for the family after his army abandons his platoon on Earth.

Brain Powerd is a Japanese anime television series created by Sunrise. The series is set on a future, decimated Earth after the discovery of a mysterious, alien spacecraft dubbed "Orphan". A group of researchers scour the planet for Orphan's disc plates using mecha called "Antibodies" in order to revive the craft, an event that would result in the utter destruction of all lifeforms on Earth. The protagonists Yu Isami and Hime Utsumiya must utilize a special Antibody called "Brain Powerd" to counter the Orphan plans and save humanity. Brain Powerd was directed and written by Gundam creator Yoshiyuki Tomino. The series features mecha designs by Mamoru Nagano, character designs by Mutsumi Inomata, and music by Yoko Kanno. 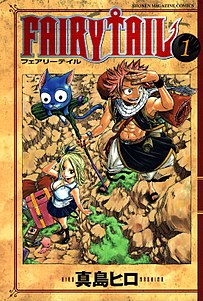 Fairy Tail is a Japanese manga series written and illustrated by Hiro Mashima. It was serialized in Kodansha's Weekly Shōnen Magazine from August 2006 to July 2017, with the individual chapters collected and published into 63 tankōbon volumes. The story follows the adventures of Natsu Dragneel, a member of the popular wizard guild Fairy Tail, as he searches the fictional world of Earth-land for the dragon Igneel. 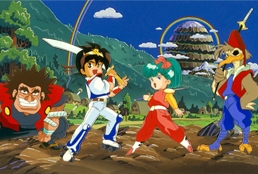 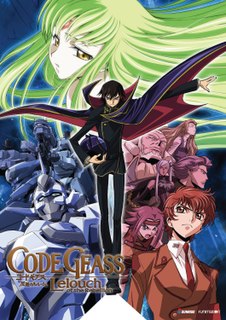 Code Geass: Lelouch of the Rebellion, often referred to simply as Code Geass, is a Japanese anime series produced by Sunrise. It was directed by Gorō Taniguchi and written by Ichirō Ōkouchi, with original character designs by Clamp. Set in an alternate timeline, the series follows the exiled prince Lelouch vi Britannia, who obtains the "power of absolute obedience" from a mysterious woman named C.C. Using this supernatural power, known as Geass, he leads a rebellion against the rule of the Holy Britannian Empire, commanding a series of mecha battles. 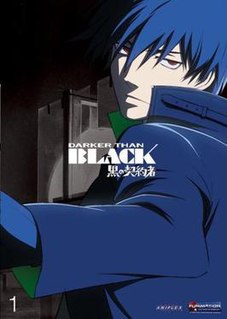 Darker than Black, also known as Darker than Black: The Black Contractor, is a Japanese anime television series created and directed by Tensai Okamura and animated by Bones. It premiered across Japan in April 2007 on MBS, TBS, and its affiliated broadcast stations, with its satellite television premiere in Japan on Animax in May 2007. The music for the series is composed by Yoko Kanno. The series has also been adapted into two manga series, which are serialized in Monthly Asuka and in Young Gangan.

Hiroyuki Yoshino is a Japanese screenwriter. He has written several anime series for the Sunrise anime series, My-HiME and My-Otome.

Naotake Furusato is an anime producer. Furusato produced Crush Gear Turbo and Gear Fighter Dendoh. Furusato conceived and planned of Xuccess Heaven, a Japanese multimedia project produced by Bandai Namco and Sega Networks. The project launched as an "animation RPG" for smartphones, considered the first of its kind, and later expand to multiple platforms and media in the future. Hirokazu Hisayuki, Yōhei Sasaki, Shō Matsui, Yukiko Akiyama, and Hisashi Hirai work on the project's character design. The opening song is by iRis and Yumemiru Adolescene.

Viper's Creed is a mecha action anime series created by Sony Pictures Entertainment Japan with animation by AIC Spirits and Digital Frontier. Though Hiroyuki Kanbe is the main director of the show, Shinji Aramaki is solely responsible for the creation and conception of the show. G4 aired the show in the United States, but later pulled it from the schedule after only four episodes. 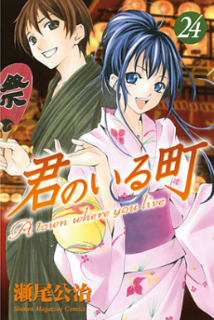 A Town Where You Live is a Japanese manga series written and illustrated by Kōji Seo. It was serialized in Kodansha's Weekly Shōnen Magazine from May 2008 to February 2014 and the chapters collected into 27 tankōbon volumes. The series follows the daily life of Haruto Kirishima as he becomes enamored with Yuzuki Eba.