Cryogenian was the time of drastic biosphere changes. After the previous Boring Billion years of stability, at the beginning of Cryogenian the severe Sturtian glaciation began, freezing the entire Earth in a planetary state known as a Snowball Earth. After 70 million years it ended, but was quickly followed by the Marinoan glaciation, which was also a global event. These events are the subject of much scientific controversy specifically over whether these glaciations covered the entire planet or a band of open sea survived near the equator (termed "slushball Earth").

The Cryogenian Period was ratified in 1990 by the International Commission on Stratigraphy. [7] In contrast to most other time periods, the beginning of the Cryogenian is not linked to a globally observable and documented event. Instead, the base of the period is defined by a fixed rock age, that was originally set at 850 million years, [8] but changed in 2015 to 720 million years. [6]

This could cause ambiguity because estimates of rock ages are variable and are subject to laboratory error. For instance, the time scale of the Cambrian Period is not reckoned by rock younger than a given age (538.8 million years), but by the appearance of the worldwide Treptichnus pedum diagnostic trace fossil assemblages. This means that rocks can be recognized as Cambrian in the field, without extensive lab testing.

Currently, there is no consensus on what global event is a suitable candidate to mark the start of the Cryogenian Period, but a global glaciation would be a likely candidate. [8]

The name of the geologic period refers to the very cold global climate of the Cryogenian.

Characteristic glacial deposits indicate that Earth suffered the most severe ice ages in its history during this period (Sturtian and Marinoan). According to Eyles and Young, "Late Proterozoic glaciogenic deposits are known from all the continents. They provide evidence of the most widespread and long-ranging glaciation on Earth." Several glacial periods are evident, interspersed with periods of relatively warm climate, with glaciers reaching sea level in low paleolatitudes. [9]

Glaciers extended and contracted in a series of rhythmic pulses, possibly reaching as far as the equator. [10]

The Cryogenian is generally considered to be divisible into at least two major worldwide glaciations. The Sturtian glaciation persisted from 720 to 660 million years ago, and the Marinoan glaciation which ended approximately 635 Ma, at the end of the Cryogenian. [11] The deposits of glacial tillite also occur in places that were at low latitudes during the Cryogenian, a phenomenon which led to the hypothesis of deeply frozen planetary oceans called "Snowball Earth". [12]

Eyles and Young state, "Most Neoproterozoic glacial deposits accumulated as glacially influenced marine strata along rifted continental margins or interiors." Worldwide deposition of dolomite might have reduced atmospheric carbon dioxide. The break up along the margins of Laurentia at about 750 Ma occurs at about the same time as the deposition of the Rapitan Group in North America, contemporaneously with the Sturtian in Australia. A similar period of rifting at about 650 Ma occurred with the deposition of the Ice Brook Formation in North America, contemporaneously with the Marinoan in Australia. [9] The Sturtian and Marinoan are local divisions within the Adelaide Rift Complex.

Fossils of testate amoeba (or Arcellinida) first appear during the Cryogenian Period. [13] During the Cryogenian Period, the oldest known fossils of sponges (and therefore animals) formed. [14] [15] [16] The issue of whether or not biology was impacted by this event has not been settled, for example Porter (2000) suggests that new groups of life evolved during this period, including the red algae and green algae, stramenopiles, ciliates, dinoflagellates, and testate amoeba. [17]

The end of the period also saw the origin of heterotrophic plankton, which would feed on unicellular algae and prokaryotes, ending the bacterial dominance of the oceans. [18] 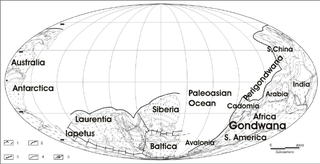 The Neoproterozoic Era is the unit of geologic time from 1 billion to 538.8 million years ago. 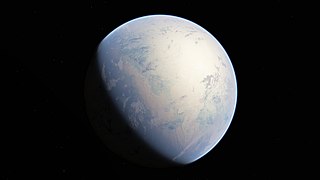 The Snowball Earth hypothesis proposes that, during one or more of Earth's icehouse climates, the planet's surface became entirely or nearly entirely frozen. It is believed that this occurred sometime before 650 M.Y.A. during the Cryogenian period. Proponents of the hypothesis argue that it best explains sedimentary deposits that are generally believed to be of glacial origin at tropical palaeolatitudes and other enigmatic features in the geological record. Opponents of the hypothesis contest the geological evidence for global glaciation and the geophysical feasibility of an ice- or slush-covered ocean, and they emphasize the difficulty of escaping an all-frozen condition. A number of unanswered questions remain, including whether Earth was a full snowball or a "slushball" with a thin equatorial band of open water. The snowball-Earth episodes are proposed to have occurred before the sudden radiation of multicellular bioforms known as the Cambrian explosion. The most recent snowball episode may have triggered the evolution of multicellularity.

The Proterozoic is a geological eon spanning the time interval from 2500 to 538.8 million years ago. It is the most recent part of the Precambrian "supereon". It is also the longest eon of the Earth's geologic time scale, and it is subdivided into three geologic eras : the Paleoproterozoic, Mesoproterozoic, and Neoproterozoic. 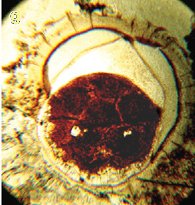 The Doushantuo Formation is a geological formation in western Hubei, eastern Guizhou, southern Shaanxi, central Jiangxi, and other localities in China. It is known for the fossil Lagerstätten in Zigui in Hubei, Xiuning in Anhui, and Weng'an in Guizhou, as one of the oldest beds to contain minutely preserved microfossils, phosphatic fossils that are so characteristic they have given their name to "Doushantuo type preservation". The formation, whose deposits date back to the Early and Middle Ediacaran, is of particular interest because it covers the poorly understood interval of time between the end of the Cryogenian geological period and the more familiar fauna of the Late Ediacaran Avalon explosion, as well as due to its microfossils' potential utility as biostratigraphical markers. Taken as a whole, the Doushantuo Formation ranges from about 635 Ma at its base to about 551 Ma at its top, with the most fossiliferous layer predating by perhaps five Ma the earliest of the 'classical' Ediacaran faunas from Mistaken Point on the Avalon Peninsula of Newfoundland, and recording conditions up to a good forty to fifty million years before the Cambrian explosion at the beginning of the Phanerozoic. 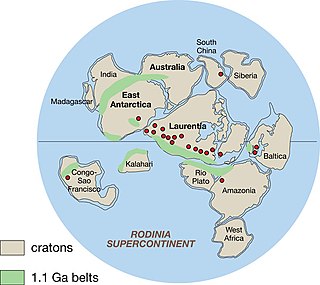 Mirovia or Mirovoi was a hypothesized superocean which may have been a global ocean surrounding the supercontinent Rodinia in the Neoproterozoic Era, about 1 billion to 750 million years ago. Mirovia may be essentially identical to, or the precursor of, the hypothesized Pan-African Ocean, which followed the rifting of Rodinia. The Panthalassa (proto-Pacific) Ocean developed in the Neoproterozoic Era by subduction at the expense of the global Mirovia ocean.

The Marinoan glaciation, sometimes also known as the Varanger glaciation, was a period of worldwide glaciation that lasted from approximately 650 to 632.3 ± 5.9 Ma during the Cryogenian period. This glaciation possibly covered the entire planet, in an event called the Snowball Earth. The end of the glaciation might have been hastened by the release of methane from equatorial permafrost.

This timeline of natural history summarizes significant geological and biological events from the formation of the Earth to the arrival of modern humans. Times are listed in millions of years, or megaanni (Ma).

The Lantian Formation is a 150-meter-thick sequence of rocks deposited in southern China during a 90-million-year epoch in the Ediacaran period. Its algal macrofossils are the oldest large and complex fossils known.

The Kaigas glaciation was a hypothesized snowball earth event in the Neoproterozoic Era, preceding the Sturtian glaciation. Its occurrence was inferred based on the interpretation of Kaigas Formation conglomerates in the stratigraphy overlying the Kalahari Craton as correlative with pre-Sturtian Numees formation glacial diamictites. However, the Kaigas formation was later determined to be non-glacial, and a Sturtian age was assigned to the Numees diamictites. Thus, there is no longer any evidence for a Neoproterozoic glaciation prior to the Sturtian snowball earth event.

The Gaskiers glaciation is a period of widespread glacial deposits that lasted under 340 thousand years, between 579.63 ± 0.15 and 579.88 ± 0.44 million years ago — i.e. late in the Ediacaran Period — making it the last major glacial event of the Precambrian. It was also the last and the shortest of at least three major ice ages in the Neoproterozoic era. It is assumed that, in contrast to the Sturtian and Marinoan periods, it did not lead to global glaciation.

The Smalfjord diamictite, Bigganjargga Tillite or Reusch's Moraine is a diamictite in Finnmark, northern Norway. The rock was first identified as a tillite by Hans Reusch in 1891, hence its name. The tillite overlies sandstone whose contact surface is striated. Reusch's Moraine belong to the Smalfjord Formation, a geological formation of Neoproterozoic age. The tillite possibly formed during the Sturtian glaciation in connection to a global glaciation. 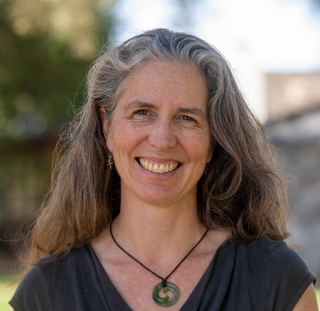 Susannah M. Porter is an American paleontologist and geobiologist who studies the early evolution of eukaryotes, the early Cambrian fossil record of animals, and the evolution of skeletal biomineralization. She is currently a professor at the University of California, Santa Barbara. Porter is a Fellow of the Paleontological Society. She has received national recognition awards from the Geological Society of America.

The Neoproterozoic Oxygenation Event (NOE), also called the Second Great Oxidation Event, was a time interval between around 850 and 540 million years ago which saw a very significant increase in oxygen levels in Earth's atmosphere and oceans.