Last updated March 02, 2020
This article is about the stone chambers called "crypts". For other uses, see Crypt (disambiguation).

A crypt (from Latin crypta "vault") is a stone chamber beneath the floor of a church or other building. It typically contains coffins, sarcophagi, or religious relics.

Originally, crypts were typically found below the main apse of a church, such as at the Abbey of Saint-Germain en Auxerre, but were later located beneath chancel, naves and transepts as well. Occasionally churches were raised high to accommodate a crypt at the ground level, such as St Michael's Church in Hildesheim, Germany.

"Crypt" developed as an alternative form of the Latin "vault" as it was carried over into Late Latin, and came to refer to the ritual rooms found underneath church buildings. It also served as a vault for storing important and/or sacred items.

"Crypta", however, is also the female form of crypto "hidden". The earliest known origin of both is in the Ancient Greek κρύπτω (krupto/krypto), the first person singular indicative of the verb "to conceal, to hide".

First known in the early Christian period, in particular North Africa at Chlef and Djemila in Algeria, and Byzantium at Saint John Studio in Constantinople where Christian churches have been built over mithraea, the mithraeum has often been adapted to serve as a crypt.

The famous crypt at Old St. Peter's Basilica, Rome, developed about the year 600, as a means of affording pilgrims a view of Saint Peter's tomb, which lay according to the Roman fashion, directly below the high altar. The tomb was made accessible through an underground passageway beneath the sanctuary from where pilgrims could enter at one stair, pass by the tomb and exit without interrupting the clerical community's service at the altar directly above. [1]

Crypts were introduced into Frankish church building in the mid-8th century, as a feature of its Romanization. Their popularity then spread more widely in western Europe under Charlemagne. Examples from this period are most common in the early medieval West, for example in Burgundy at Dijon and Tournus.

After the 10th century the early medieval requirements of a crypt faded, as church officials permitted relics to be held in the main level of the church. By the Gothic period crypts were rarely built, however burial vaults continued to be constructed beneath churches and referred to as crypts.

In more modern terms, a crypt is most often a stone chambered burial vault used to store the deceased. Placing a corpse into a crypt can be called immurement, and is a method of final disposition, as an alternative to for example cremation. Crypts are usually found in cemeteries and under public religious buildings, such as churches or cathedrals, but are also occasionally found beneath mausolea or chapels on personal estates. Wealthy or prestigious families will often have a 'family crypt' or 'vault' in which all members of the family are interred. Many royal families, for example, have vast crypts containing the bodies of dozens of former royalty. In some localities an above ground crypt is more commonly called a mausoleum, which also refers to any elaborate building intended as a burial place, for one or any number of people.

There was a trend in the 19th century of building crypts on medium to large size family estates, usually subtly placed on the edge of the grounds or more commonly incorporated into the cellar. After a change of owner these are often blocked up and the house deeds will not allow this area to be re-developed. 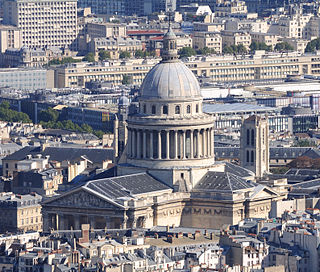 The Panthéon is a monument in the 5th arrondissement of Paris, France. It is located in the area known as the Latin Quarter, standing atop the Montagne Sainte-Geneviève, at the center of the Place du Panthéon which was named after it. The edifice was built from 1758 to 1790 over the designs of Jacques-Germain Soufflot at the behest of King Louis XV of France, who meant is as a church dedicated to Saint Genevieve, the city's patron saint, whose relics were to be housed there. Neither Soufflot nor Louis XV however lived to see the church completed. 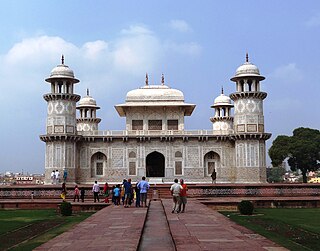 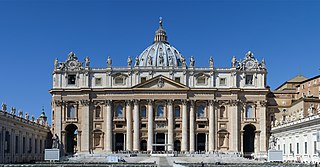 The Papal Basilica of Saint Peter in the Vatican, or simply Saint Peter's Basilica, is a church built in the Renaissance style located in Vatican City, the papal enclave which is within the city of Rome. 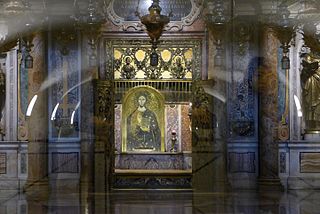 An altar stone is a piece of natural stone containing relics in a cavity and intended to serve as the essential part of an altar for the celebration of Mass in the Roman Catholic Church. Consecration by a bishop of the same rite was required. In the Byzantine Rite, the antimension, blessed and signed by the bishop, serves a similar function. 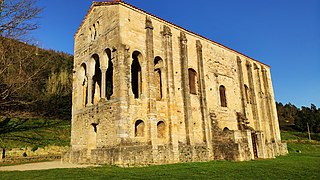 Pre-Romanesque art and architecture is the period in European art from either the emergence of the Merovingian kingdom in about 500 CE or from the Carolingian Renaissance in the late 8th century, to the beginning of the 11th century Romanesque period. The term is generally used in English only for architecture and monumental sculpture, but here all the arts of the period are briefly described.

Merovingian art is the art of the Merovingian dynasty of the Franks, which lasted from the 5th century to the 8th century in present-day France, Benelux and a part of Germany. The advent of the Merovingian dynasty in Gaul in the 5th century led to important changes in the field of arts. Sculpture regressed to be little more than a simple technique for the ornamentation of sarcophagi, altars and ecclesiastical furniture. On the other hand, gold work and the new medium of manuscript illumination integrated "barbarian" animal-style decoration, with Late Antique motifs, and other contributions from as far as Syria or Ireland to constitute Merovingian art.

Palermo Cathedral is the cathedral church of the Roman Catholic Archdiocese of Palermo, located in Palermo, Sicily, southern Italy. It is dedicated to the Assumption of the Virgin Mary. As an architectural complex, it is characterized by the presence of different styles, due to a long history of additions, alterations and restorations, the last of which occurred in the 18th century.

The Abbey of St Martial was a monastery in Limoges, France, founded in 848 and dissolved in 1791. 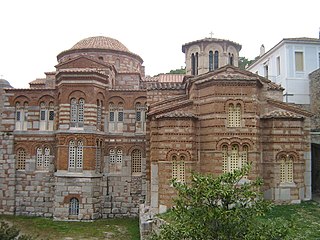 Hosios Loukas is a historic walled monastery situated near the town of Distomo, in Boeotia, Greece. It is one of the most important monuments of Middle Byzantine architecture and art, and has been listed on UNESCO's World Heritage Sites, along with the monasteries of Nea Moni and Daphnion. 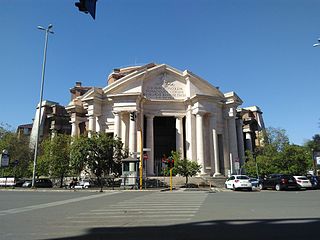 Minor Basilica of the Immaculate Heart of Mary, is a titular church in Piazza Euclide, Rome. It was built by the architect Armando Brasini (1879–1965). Its construction began in 1923 with the design of a Greek cross inscribed in a circle with an articulated facade, and completed before 1936, the year in which it was made a parish church and granted to the Congregation of Missionary Sons of the Sacred Immaculate Heart of Mary, usually known as the Claretian Missionaries. A grand dome was planned, but never realized; a smaller drum was completed in 1951. 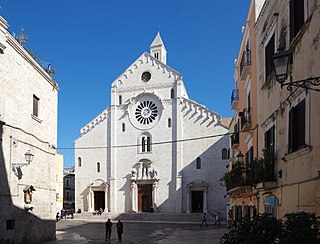 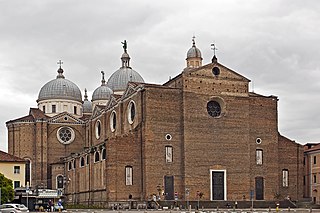 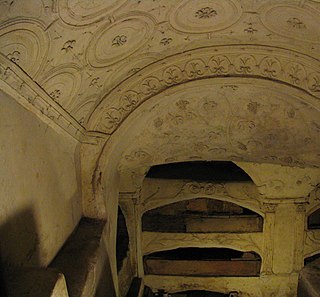 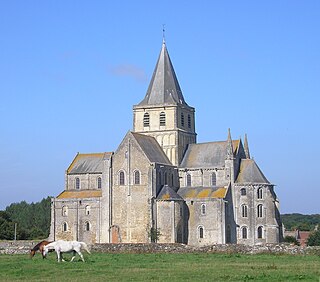