The Cudgel War (also Club War, Finnish: Nuijasota, Swedish: Klubbekriget) was a 1596-1597 peasant uprising in Finland, which was then part of the Kingdom of Sweden. The name of the uprising derives from the fact that the peasants armed themselves with various blunt weapons, such as cudgels, flails and maces, since they were seen as the most efficient weapons against their heavily-armoured enemies. The yeomen also had swords, some firearms and two cannons at their disposal. Their opponents, the troops of Clas Eriksson Fleming, were professional, heavily-armed and armoured men-at-arms. [2]

Modern Finnish historiography sees the uprising in the context of the conflict between Duke Charles and Sigismund, King of Sweden and Poland (War against Sigismund). Charles agitated the peasants to revolt against the nobility of Finland, which supported Sigismund during the conflict.

The 25-year war between the Kingdom of Sweden and the Tsardom of Russia had increased the tax burden, the most hated of which was the "castle camp", i.e. the accommodation, subsistence and payment of wages at the expense of the peasants. The peasants found it intolerable, in particular, that noble and inferior squires who equipped cavalry soldiers for the army were allowed to collect castle camp dues even when the soldiers were not at war, and that Klaus Fleming kept the army in the castle camp for many years after the war to keep it available for his use. There were many abuses and illegalities towards the peasants committed by the nobles and their armies in collecting castle camp dues. Other key explanations for the outbreak of cudgel warfare have included "the burdens of wartime and severe failed harvests, the chaos caused by war fatigue, political provocations, and the exploitation of peasants by a nobility who grew in number and wealth". [3]

An uprising began on Christmas Eve 1595 and was initially successful, but shortly thereafter was crushed by cavalry. [4] Officially, the Cudgel War began in Ostrobothnia with an attack by peasants on Isokyrö's church on November 25, 1596. [1] [5] The peasants won a number of encounters with infantry. [5] Klaus Fleming began negotiating a truce that required the surrender of peasant leader Jaakko Ilkka. Ilkka fled to avoid being handed over and the peasant army scattered, pursued by the soldiers. At least 1500 were killed within the next two months. [5] Along with Ilkka, five other rebellion leaders were executed on January 27, 1597. [6]

Israel Larsson was named as the new governor of central and northern Ostrobothnia, and planned to support the rebellion until he fled rather than face Fleming. Leaderless, the peasants attacked on February 24, 1597, and fought their last battle on the Santavuori Hill in Ilmajoki. [1] Over 1,000 were killed and 500 captured. [5]

The insurgents were mostly Finnish peasants from Ostrobothnia, Northern Tavastia, and Savo. The events can also be seen as a part of a larger power struggle between King Sigismund and Duke Charles. [2] [7]

In his work Nuijasota, sen syyt ja tapaukset (1857–1859) (English: Cudgel War, its reasons and causes), historian and fennoman Yrjö Koskinen (né Forsman) saw the peasants as fighting for freedom and justice. Fredrika Runeberg's Sigrid Liljeholm (1862), one of the first Finnish historical novels, depicts women's fates during the war. Albert Edelfelt's painting Burned Village (1879) depicts a woman, a child, and an old man hiding behind a rock as a village burns in the background. [8] The poet Kaarlo Kramsu praised the insurgents and lamented their defeat in patriotic poems such as Ilkka, Hannu Krankka, and Santavuoren tappelu, published in Runoelmia (1887). After the Finnish Civil War, the debate has centered on an interpretation that emphasizes Duke Charles's role in inciting the revolt, as found in Pentti Renvall's Kuninkaanmiehiä ja kapinoitsijoita Vaasa-kauden Suomessa (1949); and an explanation that stresses the roots of the rebellion in social injustice and class conflict, as argued by Heikki Ylikangas in Nuijasota (1977). A historical reenactment of the Cudgel War is conducted yearly in the Kavalahti scout camp. [9] Jaakko Ilkka took the 75th place in the Great Finns TV show. A commemorative silver coin was also minted to mark the occasion. [10]

Charles IX, also Carl, reigned as King of Sweden from 1604 until his death. He was the youngest son of King Gustav I and of his second wife, Margaret Leijonhufvud, the brother of King Eric XIV and of King John III, and the uncle of Sigismund, who became king both of Sweden and of Poland. By his father's will Charles received, by way of appanage, the Duchy of Södermanland, which included the provinces of Närke and Värmland; but he did not come into actual possession of them till after the fall of Eric and the succession to the throne of John in 1568.

The Battle of Stångebro, or the Battle of Linköping, took place at Linköping, Sweden, on 25 September 1598 (O.S.) and effectively ended the personal union between Sweden and the Polish–Lithuanian Commonwealth, that had existed since 1592. In the battle, an army of c. 8,000–12,000 commanded by Duke Charles defeated a mixed force of c. 5,000–8,000 consisting of an invading army of mercenaries in the king's employ and diverse but poorly co-ordinated supporting Swedish noblemen's forces commanded by King of both Sweden and the Polish–Lithuanian Commonwealth Sigismund III Vasa, who was acting to maintain and restore his personal union against anti-Catholic forces in Lutheran Sweden. The Swedish king's general Constantin fought at the western bridge.

The war against Sigismund was a war between Duke Charles, later King Charles IX and Sigismund, King of Sweden and the Polish–Lithuanian Commonwealth. Lasting from 1598 to 1599, it is also called the War of Deposition against Sigismund, since the focus of the conflict was the attempt to depose the latter from the throne of Sweden. The war eventually resulted in the deposition of Sigismund, the dissolution of the Polish-Swedish Union, and the beginning of an eleven-year war. 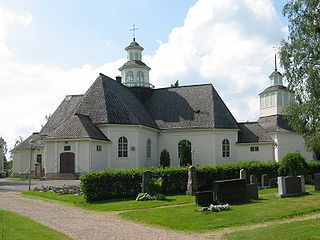 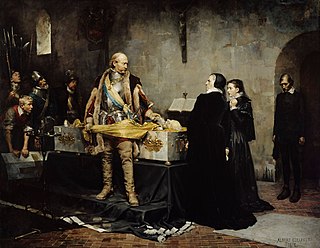 Baron Klaus Eriksson Fleming was a Finnish-born member of the Swedish nobility and admiral, who played an important role in Finnish and Swedish history during the rise of Sweden as a Great Power. He was a trustee of kings John III and Sigismund Vasa. His wife was Ebba Stenbock.

The Battle of Napue was fought on 19 February 1714 (O.S.) / 2 March 1714 (N.S.) at the villages of Napue and Laurola in the Isokyrö parish of the Swedish Empire between the Swedish Empire and the Tsardom of Russia. It was the final land battle of the Finnish campaign in the Great Northern War. The Swedish detachment, consisting almost entirely of Finnish troops, were defeated by the numerically superior Russian force. As a result, all of Finland fell under Russian military occupation for the rest of the War; a seven-year period of hardship known in Finland as the Great Wrath. The Kyrö Distillery Company named its Napue rye gin after the battle in 2014.

Jaakko Pentinpoika Ilkka was a wealthy Ostrobothnian landowner and leader of the Cudgel War, a 16th-century Finnish peasant revolt against Swedish rule.

Jaakko Ilkka is a folk opera by Finnish composer Jorma Panula composed in 1977-1978 which deals with the eponymous peasant leader of the Cudgel War of 1596. The opera uses material from Finnish folk and fiddle music and premiered at the Ilmajoki Music Festival in 1978.

Ebba Gustavsdotter Stenbock was a Swedish noble. She led the defense of the stronghold Turku Castle for the loyalist of Sigismund III Vasa during the Siege by Charles IX of Sweden in succession of her spouse Clas Eriksson Fleming (1530–1597), governor of Finland. The sister of queen Katarina Stenbock, she married Clas Eriksson Fleming (1530–1597), governor of Finland, in 1573.

The Åbo Bloodbath of 10 November 1599 was a public execution in the Finnish town of Turku (Åbo), then part of the Kingdom of Sweden, in the context of the War against Sigismund and the Club War. Sweden was by then in the final phase of a civil war, with one faction supporting king Sigismund III Vasa, who also was king and Grand Duke of Poland–Lithuania, and another faction supporting duke Charles of Södermanland, the later Charles IX, Sigismund's paternal uncle. After winning the upper hand in the dispute, Charles crushed the last resistance to his rule, particularly in Finland, while Sigismund had already retreated to Poland.

Santavuori is a hill in Ilmajoki municipality, South Ostrobothnia. It rises 145 metres above sea level.

Ilkka was a Finnish morning newspaper published in Seinäjoki, Finland from 1906 to 2020.

Pentti Pouttu, also known as Bengt Pouttu, died 1597 in Turku, Sweden was a Finnish/Swedish peasant rebellion leader, land owner and merchant with Swedish origin from Gammelgården in Karleby, Ostrobothnia. He was one of the leaders of the 1596/97 peasant uprising, the Cudgel War. Year of Pouttu's birth is unknown. 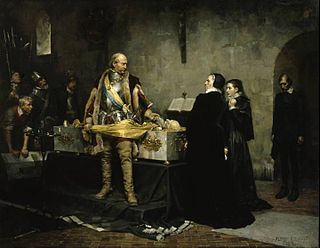 Events from the year 1597 in Sweden

Events from the year 1599 in Sweden

Gödik Gustafsson Fincke was a Finnish-born member of the Swedish nobility and military officer who served as the stadtholder of Olavinlinna Castle.

Hannu Krankka was one of the leaders of Finnish peasants during the 1596-97 Cudgel War, the largest uprising in what is now the country of Finland when it was under Swedish rule. The peasants, including those in Krankka's home region of northern Ostrobothnia, rebelled against oppression, including often unbearable borgläger-type taxation.

Hans Larsson was lieutenant in the Cudgel War at the end of 16th century. He was also the head of Klaus Fleming's military unit in Hämeenkyrö, Finland.

Ostrobothnians are a subgroup (Heimo) of the Finnish people who live in the historical province of Ostrobothnia in the northwestern parts of Finland.