Culture Day (文化の日, Bunka no Hi) is a national holiday held annually in Japan on November 3 for the purpose of promoting culture, the arts, and academic endeavor. Festivities typically include art exhibitions, parades, and award ceremonies for distinguished artists and scholars.

Culture Day was first held in 1948, to commemorate the announcement of the post-war Japanese constitution on November 3, 1946. [1]

November 3 was first celebrated as a national holiday in 1868, when it was called Tenchō-setsu (天長節), a holiday held in honor of the birthday of the reigning Emperor—at that time, Emperor Meiji (see also The Emperor's Birthday). Following Meiji's death in 1912, November 3 ceased to be a holiday until 1927, when his birthday was given its own specific holiday, known as Meiji-setsu (明治節). This was subsequently discontinued with the announcement of Culture Day in 1948. [1]

As Culture Day exists to promote the arts and various fields of academic endeavor, local and prefectural governments typically choose this day to hold art exhibits, culture festivals, and parades. For example, Hakone in Kanagawa Prefecture holds the annual Feudal Lord's Parade (箱根大名行列, Hakone Daimyō Gyōretsu) to exhibit Edo period clothing and costumes. [2] It is common for universities to present new research and projects on Culture Day.[ citation needed ] Primary and secondary schools often have a "culture festival" on or near this day. [3]

Since 1936, the award ceremony for the prestigious Order of Culture has been held on this day. [4] Given by the Emperor himself to those who have significantly advanced science, the arts or culture, it is one of the highest honours bestowed by the Imperial Family. The prize is not restricted to Japanese citizens, and for instance was awarded to the Apollo 11 astronauts upon their successful return from the moon, as well as literary scholar Donald Keene. [5]

Culture Day is statistically one of the clearest days of the year. Between 1965 and 1996, there have only been three years with rain occurring in Tokyo on Culture Day. [6]

The Double Ninth Festival, observed on the ninth day of the ninth month in the Chinese calendar, is a traditional Chinese holiday, mentioned in writing since before the Eastern Han period.

Golden Week is a week from the 29th of April to early May containing a number of Japanese holidays. It also known as Ōgata Renkyū or Ōgon Shūkan.

Nihonjinron, is a genre of texts that focus on issues of Japanese national and cultural identity. Such texts share the general belief of the uniqueness of Japan, and the term nihonjinron can be employed to refer to this outlook. 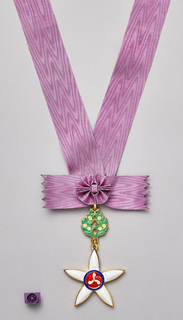 Public holidays in Japan were established by the Public Holiday Law of 1948. A provision of the law establishes that when a national holiday falls on a Sunday, the next working day shall become a public holiday, known as furikae kyūjitsu. Additionally, any day that falls between two other national holidays shall also become a holiday, known as kokumin no kyūjitsu. May 4, sandwiched between Constitution Memorial Day on May 3 and Children's Day on May 5, was an annual example of such a holiday until it was replaced by Greenery Day in 2007.

The Higashiyama culture is a segment of Japanese culture originated and promoted in the 15th century by the shōgun Ashikaga Yoshimasa, after he retired to his villa in the eastern hills of the capital city Kyoto.

Labor Thanksgiving Day is a national holiday in Japan celebrated on November 23 of each year. The law establishing the holiday cites it as an occasion to commemorate labor and production and give one another thanks.

National Foundation Day is a national holiday in Japan celebrated annually on February 11, celebrating the mythological foundation of Japan and the accession of its first emperor, Emperor Jimmu at Kashihara gū on 11 February 660 BC.

Yukka nu hii is an annual festival of the Okinawa Islands of southwestern Japan, which is traditionally celebrated on the 4th day of the 5th month of the lunisolar calendar. It centers on the traditional dragon boat races. The festival dates back to circa 1400, where it is said to have been adopted from the Chinese. The dragon boat races are a form of giving thanks to the sea and agricultural gods and asking for their continued help for the future.

The Fukushima Prefectural Culture Center is a large multi-purpose public cultural facility in the city of Fukushima, Japan, which opened in September 1970.

The Hitachi Furyumono (日立風流物) is a parade in Hitachi city, Japan. It is held during Hitachi Sakura Matsuri (日立さくらまつり), the annual cherry blossom festival in April, and the Great Festival at the local Kamine Shrine once in every seven years in May. It is inscribed on the UNESCO Intangible Cultural Heritage Lists as a part of "Yama, Hoko, Yatai, float festivals in Japan", 33 traditional Japan festivals.

Act on the Vitalization of Theaters and Halls, also known by the truncated name of Theater Law, is a law in Japan.

Hideo Haga is known for his photography of traditional Japanese festivals and folk culture.