The Curragh Racecourse -- usually referred to as simply the Curragh -- is one of Ireland's most important Thoroughbred racecourses. It is situated on the Curragh plain in County Kildare, between the towns of Newbridge and Kildare. [1]

The name "Curragh" comes from the Irish language word Cuirreach, meaning "place of the running horse". [2] The first recorded race on the plain took place in 1727, but it was used for races before then. [3] The first Derby was held in 1866, [4] and in 1868 the Curragh was officially declared a horse racing and training facility by act of parliament.

Redevelopment of the Curragh grandstand and racecourse facilities began in 2017 with completion due in time for commencement of the 2019 Irish Flat season. A truncated racing fixture list continued to be held at the course during this period with temporary facilities in place for the public. [5]

The Curragh is a right-handed track, [6] horseshoe and galloping in nature with a testing uphill finish. [7] The track spans two miles in distance with a one-mile chute. [8] It is home to all five Irish Flat Classics. [9]

Numerous elite level racehorses have run at the course prior to becoming multiple Group One winners around the world. Due to the fair nature of the track, the course has a reputation for attracting high quality two-year old runners in particular, with many making their first racecourse appearances at the Curragh.

On race days, there are shuttle buses from Kildare railway station to The Curragh. Dublin Coach's routes to Portlaoise and Ennis also serve the racecourse on these days. [11]

County Kildare is a county in Ireland. It is located in the province of Leinster and is part of the Mid-East Region. It is named after the town of Kildare. Kildare County Council is the local authority for the county, which has a population of 222,504. 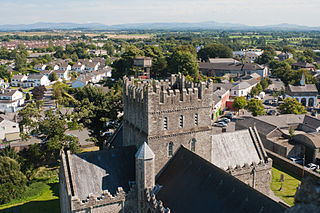 Kildare is a town in County Kildare, Ireland. As of 2016, its population was 8,634 making it the 7th largest town in County Kildare. The town lies on the R445, some 50 km (31 mi) west of Dublin – near enough for it to have become, despite being a regional centre in its own right, a commuter town for the capital. Although Kildare gives its name to the county, Naas is the county town.

The Curragh is a flat open plain of almost 2,000 hectares of common land in Newbridge, County Kildare. This area is well known for Irish horse breeding and training. The Irish National Stud is located on the edge of Kildare town, beside the famous Japanese Gardens. Also located here is Pollardstown Fen, the largest fen in Ireland. This area is of particular interest to botanists and ecologists because of the numerous bird species that nest and visit there. There are also many rare plants that grow there. 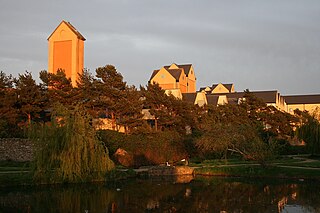 Naas is the county town of County Kildare in Ireland. In 2016, it had a population of 21,393, making it the second largest town in County Kildare after Newbridge. 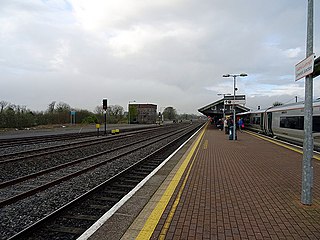 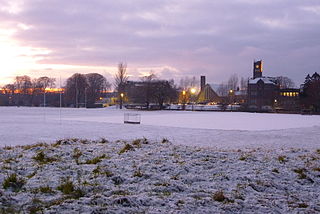 Newbridge, officially known by its Irish name Droichead Nua, is a town in County Kildare, Ireland. While the nearby Great Connell Priory was founded in the 13th century, the town itself formed from the 18th century onwards, and grew rapidly alongside a military barracks which opened in the early 19th century. Taking on the name Newbridge in the 20th century, the town expanded to support the local catchment, and also as a commuter town for Dublin. Doubling in population during the 20 years between 1991 and 2011, its population of 22,742 in 2016 makes it the largest town in Kildare and the fifteenth-largest in Ireland.

Vintage Crop was a British-bred Irish-trained Thoroughbred racehorse best known for becoming the first northern hemisphere trained runner to win Australia's premier race the Melbourne Cup. The chestnut gelding competed in flat racing in Ireland, England, and Australia from 1992 to 1995. He won 16 races in Ireland, England, and Australia. For his performance during the 1993 racing season he earned the Cartier Award for Top Stayer. 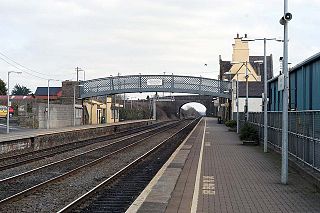 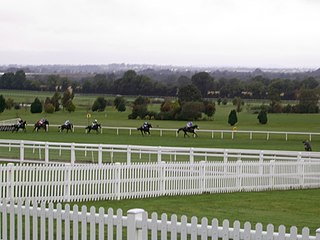 Clonmel Racecourse is a horse racing venue in the town of Clonmel, County Tipperary, Ireland which stages both National Hunt and Flat racing.

Richmond Racecourse was a British horse racing track situated at Richmond, North Yorkshire at first High Moor, then Low Moor, from 1765 to 1776. It was last used for horse racing in 1891. The grandstand, believed to have been designed by John Carr, is now the oldest surviving stone-built public grandstand in the world.

The Racing Academy and Centre of Education (RACE) is a jockey training school at the Irish National Stud near Kildare, Ireland. Its Trainee Jockey Course is a foundation course in race riding and stable work, taught in a 42-week residential program. Students typically go on to either jockey apprenticeships or stable work after completing the course. Johnny Murtagh and Cathy Gannon are among those who have gone on to success as racing jockeys after taking the Trainee Jockey Course. RACE also offers other training and certification in race riding, the care of horses and racehorse training, including riding courses for international students. The Irish School of Farriery run by the Irish Farriery Authority is located in a purpose-built building on the RACE campus, and several other organisations involved in the equine sector are also located here.