Bondra was born in Annapolis, Maryland, when his father, Peter was a member of the Washington Capitals. He spent the majority of his youth in the United States where his father played for a multitude of NHL teams. [2]

Dávid was a forward at Michigan State University for the Spartans men's ice hockey team. He scored 1 goal over his Michigan State tenure, and was able to tack up 48 healthy scratches. His brother, Nick, was beginning his collegiate career at Amherst College in 2017.

Bondra was selected 21st overall in the 2010 KHL draft. [3] Bondra made his professional debut playing for HK Poprad of the Slovak Tipsport Liga. [4]

Peter Bondra is a Soviet-born Slovak former professional ice hockey player. He was the general manager of the Slovakia national team from 2007 to 2011. A two-time 50-goal scorer, Bondra became the 37th player in National Hockey League (NHL) history to score 500 NHL goals. He has the fewest points among all players who reached that milestone with 892. Bondra scored the highest amount of goals in two seasons in NHL, in the 1994–95 season as well as in the 1997–98 season. He is one of a few players who scored five or more goals in one game in NHL. 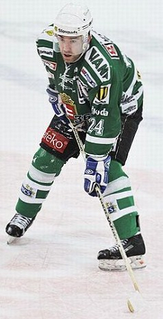 Žigmund Pálffy is a Slovak former professional ice hockey player. He was nicknamed "Žigo" in Slovak and "Ziggy" in English.

Peter Šťastný, also known colloquially as "Peter the Great" and "Stosh", is a Slovak-Canadian former professional ice hockey player who played in the National Hockey League (NHL) from 1980 to 1995. Šťastný is the second-highest scorer of the 1980s, after Wayne Gretzky. During his time with the Quebec Nordiques, Šťastný became a Canadian citizen. From 2004 to 2014, he served as a Member of the European Parliament for Slovakia. During his NHL career, he played with the Quebec Nordiques, New Jersey Devils, and St. Louis Blues.

Miroslav Zálešák is a Slovak former professional ice hockey right winger who played in the National Hockey League for the San Jose Sharks. He is currently working as a European scout for the Colorado Avalanche. 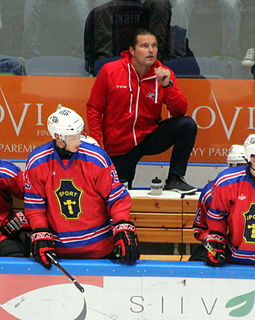 Tomasz Valtonen is a Polish-born Finnish former professional ice hockey forward. He is currently the head coach for the HK Dukla Ingema Michalovce of the highest Slovak Tipos Extra League and the Poland men's national ice hockey team. Valtonen was drafted by the Detroit Red Wings as their second-round draft pick in the 1998 NHL Entry Draft. 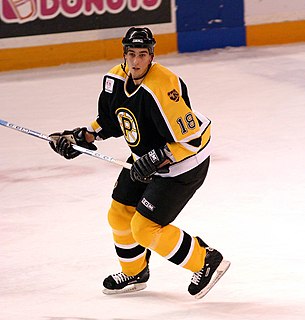 Milan Jurčina is a Slovak professional ice hockey defenceman who is currently an unrestricted free agent. He most recently played for the Thomas Sabo Ice Tigers in the Deutsche Eishockey Liga (DEL). He has previously played in the National Hockey League (NHL) for the Boston Bruins, Washington Capitals, Columbus Blue Jackets and New York Islanders. Internationally, he has played for the Slovak national team.

Kelly David Miller is an American former professional ice hockey player, who played in the National Hockey League between 1985 and 1999 with the New York Rangers and Washington Capitals. He was one of three Miller brothers who played in the (NHL), and is a cousin of current Anaheim Ducks goaltender Ryan Miller and Ryan's brother Drew Miller of the Detroit Red Wings. 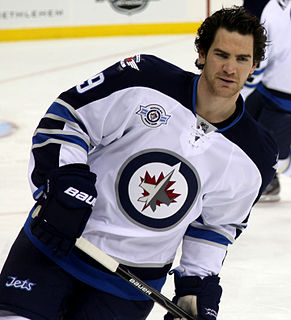 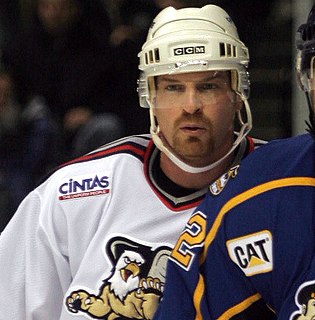 Kip Charles Miller is an American former ice hockey forward. He last played for the American Hockey League Grand Rapids Griffins in 2006–07. He was drafted by the Quebec Nordiques as their 4th-round pick in the 1987 NHL Entry Draft, 72nd overall. 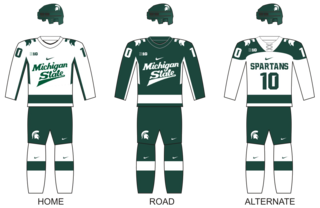 Nathan Robinson is a Canadian professional ice hockey forward who is currently playing with the Saale Bulls Halle in the Oberliga German ice hockey league. He has previously played for the Nottingham Panthers and in the National Hockey League with the Detroit Red Wings and the Boston Bruins. 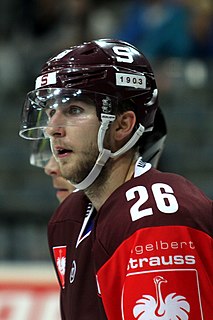 Juraj Mikuš is a Slovak professional ice hockey defenceman currently playing for HC Dynamo Pardubice of the Czech Extraliga (ELH). Mikuš was drafted by the Toronto Maple Leafs in the fifth round of the 2007 NHL Entry Draft from HC Dukla Trenčín of Slovak Extraliga.

Carl Oliver Hagelin is a Swedish professional ice hockey player for the Washington Capitals of the National Hockey League (NHL). Hagelin was drafted by the New York Rangers in the sixth round, 168th overall, of the 2007 NHL Entry Draft. Hagelin has won the Stanley Cup as a member of the Pittsburgh Penguins in 2016 and 2017. He also played the most playoff games of any NHL player in the 2010s decade, with 128. He is also very fast, as shown when Hagelin, then a rookie with the Rangers, circled the rink at Ottawa's Scotiabank Place in 13.218 seconds, in contrast to Dylan Larkin skating at a record breaking time of 13.172.

Thomas A. Anastos is an American ice hockey coach, former player, and former league administrator. He was most recently the head coach of the Michigan State Spartans men's ice hockey team (MSU), a member of the Big Ten Conference in Division I of the National Collegiate Athletic Association (NCAA). He played junior hockey for the Paddock Pool Saints, college hockey for the Michigan State University Spartans and professional hockey for the Sherbrooke Canadiens. He was an ice hockey league administrator most recently serving as commissioner of the original Central Collegiate Hockey Association (CCHA), a now defunct NCAA Division I conference, from 1998-2012. Anastos is a member of the Dearborn (Michigan) Sports Hall of Fame, inducted in 2000.

The Michigan–Michigan State men's ice hockey rivalry is a college ice hockey rivalry between Michigan Wolverines men's ice hockey and Michigan State Spartans men's ice hockey that is part of the larger intrastate rivalry between the University of Michigan and Michigan State University. It constitutes the most-played rivalry in college hockey. The rivalry between the Spartans and Wolverines notably includes football and basketball rivalries, although it extends to almost all sports and many other forms of achievement. The most notable examples of the hockey rivalry are two outdoor games, the October 6, 2001 Cold War in East Lansing and the December 11, 2010 Big Chill at the Big House in Ann Arbor, which set the world record for attendance at a hockey game. This record however was broken four years later at the 2014 NHL Winter Classic on January 1, 2014. As of 2013, both teams are members of the Big Ten Conference, although they have previously competed together in both the Central Collegiate Hockey Association (CCHA) and the Western Collegiate Hockey Association (WCHA).

Martin Fehérváry is a Slovak professional ice hockey defenceman who is currently playing for the Hershey Bears in the American Hockey League (AHL) as a prospect to the Washington Capitals of the National Hockey League (NHL).

The 1985–86 Michigan State Spartans men's ice hockey team represented Michigan State University in college ice hockey. In its 7th year under head coach Ron Mason the team compiled a 34–9–2 record and reached the NCAA tournament for the eighth time in its history. The Spartans defeated Harvard 6–5 in the championship game at the Providence Civic Center in Providence, Rhode Island.