Last updated May 01, 2021
5th episode of the second season of House

"Daddy's Boy" is the fifth episode of the second season of House , which premiered on Fox on November 8, 2005. A father and his son, Carnell, a student at Princeton University, are celebrating the son's graduation and they have a father/son moment. Carnell is heading out to a party where he drinks with his friends, but begins experiencing what feels like electrical shocks and starts having convulsions.

Princeton University student Carnell has a seizure during a graduation party. In the hospital, he later suffers from sphincter paralysis, which, combined with his other symptoms usually indicates Guillain-Barré syndrome, but the tests do not support their theory.

Carnell's friend Taddy is rushed to the hospital vomiting blood and tells House that Carnell's father is the owner of a salvage yard, rather than a construction company which he had earlier claimed. A metal keychain the father made for Carnell turns out to be radioactive. Carnell's ability to produce white blood cells is severely compromised because of the radiation poisoning, and he will need a bone marrow transplant. He also has a tumor inside his cervical spine, revealed by a PET scan. They successfully remove the tumor, but he has a hemorrhage in his bowel after the surgery. Chase informs the father that no matter what the doctors do, Carnell will not be able to fight off the infection, and it will slowly compromise all of his systems.

Meanwhile, House tries to avoid his parents, who are having a flight layover in Newark. Hearing the news, Wilson plans to have a party and invites House's parents, as well as Cuddy. The parents end up at the hospital eating dinner with a reluctant and uncomfortable House, who tries to make small talk about the new motorcycle he bought. House's father objects to it being parked in a handicapped space, telling House he still has two legs and doesn't realize how lucky he is. 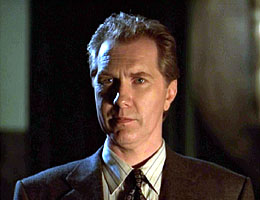 Richard Wilkins III is a fictional character in the fantasy television series Buffy the Vampire Slayer (1997–2003). Portrayed by Harry Groener, he is the mayor of Sunnydale, a fictional town rife with vampires and demons in which the main character, Buffy Summers lives. The premise of the series is that Buffy is a Slayer, a young girl endowed with superhuman powers to fight evil, which she accomplishes with the help of a small group of friends and family, called the Scooby Gang. During the show's second season, it becomes apparent that local authorities are aware of the endemic evil in the town, and either ignore it or are complicit in making it worse. The third season reveals that the Mayor is behind this conspiracy to hide and worsen Sunnydale's supernatural phenomena, as part of his century-long plot to take over the world, making him the season's primary villain, or Big Bad. His genial demeanor, promotion of family values, casual phobia of germs, and dislike of swearing belie his evil nature. The series regularly employs monsters and elements of horror to symbolize real problems, and the abuse of power in relation to the forces of darkness is a repeated theme throughout the series, as well as in its spin-off Angel.

My Dad the Rock Star is a Canadian-French animated television series that was created by KISS bassist Gene Simmons. The series was a Canada-France co-production between Nelvana and Carrere Group for France's M6 and the Canada-based channel Teletoon. The show aired on Nickelodeon and Nicktoons Network in the U.S.

Twelve is a 2002 novel by Nick McDonell about drug addiction, violence and sex among mainly wealthy Manhattan teenagers. The title refers to a new designer drug. The drug is referred to as a cross between cocaine and ecstasy. While Twelve follows the lives of a number of wealthy young adults, it centres on that of 17-year-old drug-dealer White Mike. 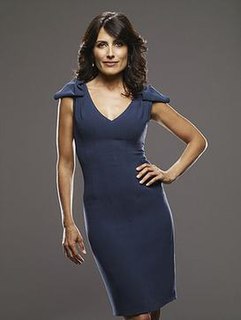 Lisa Cuddy, M.D., is a fictional character on the Fox medical drama House. She is portrayed by Lisa Edelstein. Cuddy was the Dean of Medicine of the fictional Princeton-Plainsboro Teaching Hospital in New Jersey. Cuddy quit her job after the events of season seven's finale "Moving On".

"All the Best Cowboys Have Daddy Issues" is the eleventh episode of the American drama series first season of Lost. The episode was directed by Stephen Williams and written by Javier Grillo-Marxuach. It first aired on December 8, 2004, on the American Broadcasting Company (ABC). In the episode, flashbacks reveal Jack Shephard being responsible for his father's dismissal from a hospital after performing surgery while drunk. In the present, Jack and a team go searching for two fellow plane crash survivors after they are kidnapped by somebody who was not listed in the passenger manifest.

"Lines in the Sand" is the fourth episode of the third season of House and the fiftieth episode overall.

"All In" is the seventeenth episode of the second season of House, which premiered on Fox on April 11, 2006.

"Needle in a Haystack" is the thirteenth episode of the third season of House and the fifty-ninth episode overall.

Yousuf, is a 19-year-old Iraqi who was set on fire by a group of unknown masked men outside of his central Baghdad home on January 15, 2007.

"The Social Contract" is the seventeenth episode of the fifth season of House. It aired on March 9, 2009. 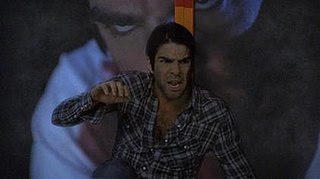 "Tabula Rasa" is the fifth episode of the fourth season of the NBC superhero drama series Heroes and sixty-fourth episode overall. The episode aired on October 19, 2009.

"Teamwork" is the eighth episode of the sixth season of House. It aired on November 16, 2009. This episode marks the departure of Jennifer Morrison from the series, since it was stated by Fox that Morrison's character would be written out of the series by the middle of season six.

"The Tyrant" is the fourth episode of the sixth season of House. It first aired October 5, 2009.

"Family Practice" is the eleventh episode of the seventh season of the American medical drama House. It first aired on February 7, 2011.

"After Hours" is the twenty-second episode of the seventh season of the American medical drama series House. It aired on May 16, 2011 on Fox. There are three plotlines the episode. Thirteen tries to save her friend from prison as Chase tries to take her to the hospital, House attempts self-surgery to remove tumors after his experimental drug causes cancer, and Taub learns his ex-girlfriend is pregnant.

"Dead & Buried" is the seventh episode of the eighth season of the American television medical drama series House and the 162nd overall episode of the series. It aired on Fox Network in the United States on November 21, 2011.

The Promising Boy is a 1981 Yugoslav youth genre film. Strongly influenced by the emerging new wave movement that seemingly challenged many of the established social norms in communist Yugoslavia, the movie tells the story of a young man who goes from being a good son to rebellious misfit and back again.