The Dadu River (Chinese :大渡河; pinyin :Dàdù Hé; Wade–Giles :Tatu Ho), known in Tibetan as the Gyelmo Ngul Chu, [1] is a major river located primarily in Sichuan province, southwestern China. The Dadu flows from the eastern Tibetan Plateau into the Sichuan Basin where it joins with the Min River, a tributary of the Yangtze River. Measured from its geographic source, the Dadu is actually longer than the Min and thus forms the main stem of the Min River system.

Shuangjiangkou Dam, expected to be the tallest dam in the world, is being built on the Dadu River.

The Dadu River originates, in name, in Danba and ends in Leshan where it meets the Min River. The true source of Dadu, and thus the entire Min River system, however, lies in Qinghai Province in the eastern Tibetan Plateau. In this region there are multiple headwaters of the Dadu with nearly identical lengths that have resulted in competing claims as the true source of the Dadu. In 2013, the China Academy of Sciences announced they had located the geographic source of the Dadu in eastern Darlag County, Qinghai ( 33°23′16″N100°17′32″E﻿ / ﻿33.38778°N 100.29222°E﻿ / 33.38778; 100.29222 ). [2] These headwaters (Chinese :马尔曲; pinyin :Mǎ'ěr Qū) are a tributary of the Markog (Chinese :玛柯河; pinyin :Mǎkē Hé), one of the two main upper stems of the Dadu along with the Darkog (Chinese :杜柯河; pinyin :Dùkē Hé). [3] Traditionally, the source of the Dadu was considered to be in the Golog Mountains in Jigzhi County at the head of the Markog, but this source was found to be a few metres shorter than the true source. Similarly, the source of the Darkog in southern Darlag County is a mere 1 m (3.3 ft) shorter than the Ma'er Qu source.

From the Dadu River's true source in Qinghai to the Min River's confluence with the Yangtze in Yibin, the length of the entire Min-Dadu River system is 1,279 km (795 mi). [2]

The Dokog River in the west and the Markog River in the east both flow southeasterly from the Bayan Har Mountains in Qinghai and into Sichuan Province. The two stems meet in Aba Prefecture, and continue south as the Dajin Chuan (Chinese :大金川; pinyin :Dàjīn Chuān; lit. : 'Big Golden River'). [4] Here, the river flows between the Daxue Mountains to the west and the Qionglai Mountains to the east. In Danba County, the Dajin Chuan meets the Xioajin Chuan (Chinese :小金川; pinyin :Xiǎojīn Chuān; lit. : 'Little Golden River') and together become the Dadu River in name. The Dadu continues south through Luding until it turns east at Shimian. East of Hanyuan, the Dadu enters the Dadu River Canyon (Chinese :大渡河峡谷; pinyin :Dàdùhé Xiágǔ) before reaching the lowlands of the Sichuan Basin just below Mount Emei. [4]

The Dadu River receives the Qingyu River tributary and meets the Min at Leshan. At the confluence of the Dadu with the Min, the Dadu possesses both greater water volume flow and a further source so it is considered the true course of the Min River system. [2] From the confluence of the two rivers, the Min continues for another 120 km (75 mi) before meeting the Yangtze at Yibin.

The Dadu River marks the transition area between traditional Tibet to the west and historic China to the east. For this reason, it has long been considered a frontier region and has hosted many conflicts. For Tibetans, the Dadu is part of the historical province of Kham. In the Chinese tradition, the Dadu forms the westernmost part of Sichuanese culture. [1] Kangding, a historical trading post between Tibet and China, is located in the Dadu River basin.

Completed in 803 CE, the Leshan Giant Buddha is a large statue carved into the rock at the confluence of the Dadu and Min Rivers. The Buddha is a popular tourist attraction today.

The Kangding Louding earthquake of 1786 caused a landslide dam on the Dadu. Ten days later, on June 10 1786, the dam broke and the resulting flood extended 1,400 kilometres (870 mi) downstream and killed 100,000 people. It is the second-deadliest landslide disaster on record. [6]

In the 20th century CE, the Dadu became famous for its Luding Bridge, a historically important bridge crossed by the Chinese Red Army while retreating from the Kuomintang troops during the Long March.

The Dadu is being heavily developed, primarily for hydroelectric power. As of March 2014, a total of 26 dams are completed, under construction or planned for the river. Those dams are listed below from downstream to upstream. [7] [8] 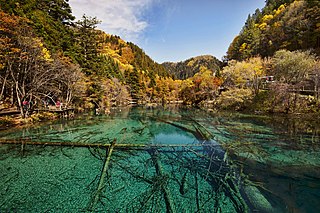 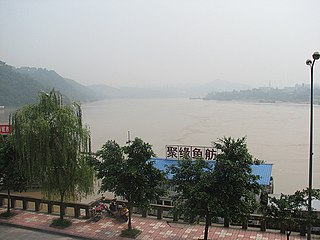 The Min River or Min Jiang is a 735-kilometer-long river (457 mi) in central Sichuan province, China. It is a tributary of the upper Yangtze River which it joins at Yibin. Within China, it was traditionally taken as the main course of the upper Yangtze prior to extensive exploration of its sources. 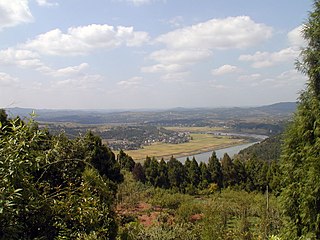 The Sichuan Basin, formerly transliterated as the Szechwan Basin, sometimes called the Red Basin, is a lowland region in southwestern China. It is surrounded by mountains on all sides and is drained by the upper Yangtze River and its tributaries. The basin is anchored by Chengdu, capital of Sichuan province, in the west, and the direct-administered municipality of Chongqing in the east. Due to its relative flatness and fertile soils, it is able to support a population of more than 100 million. In addition to being a dominant geographical feature of the region, the Sichuan Basin also constitutes a cultural sphere that is distinguished by its own unique customs, cuisine and dialects. It is famous for its rice cultivation and is often considered the breadbasket of China. In the 21st century its industrial base is expanding with growth in the high-tech, aerospace, and petroleum industries. 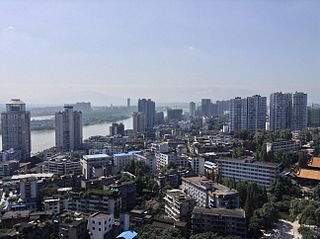 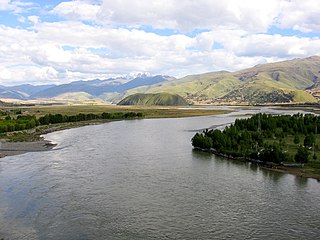 The Yalong River or Nyag Chu, is an 822-mile (1,323 km) long river in Sichuan Province in Southwestern China. It is a tributary of the Yangtze River. Its source is on the Tibet–Qinghai Plateau in Southeast Qinghai and its confluence with the Yangtze is in Panzhihua in Southwestern Sichuan. Along its route, the Yalong travels between the Shaluli Mountains to the west and the Daxue Mountains to the east. In Liangshan Prefecture, the river wraps 150 km (93 mi) around the Jinping Mountains creating the Jinping Bend. Here, water from the Yalong River has been diverted under the mountains as part of the Jinping-II Dam hydroelectric project.

Garzê Tibetan Autonomous Prefecture also known as Ganzi — is an autonomous prefecture occupying the western arm of Sichuan province, China, bordering Yunnan to the south, the Tibet Autonomous Region to the west, and Gansu to the north and northwest. It is sometimes spelled "Kardze" and "Garzin" by non-government sources. 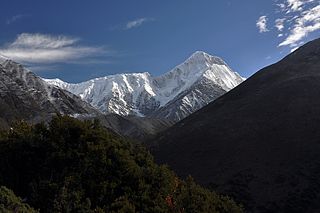 The Hengduan Mountains are a group of mountain ranges in southwest China that connect the southeast portions of the Tibetan Plateau with the Yunnan–Guizhou Plateau. The Hengduan Mountains are primarily large north-south mountain ranges that effectively separate lowlands in northern Myanmar from the lowlands of the Sichuan Basin. These ranges are characterized by significant vertical relief originating from the Indian subcontinent's collision with the Eurasian Plate, and further carved out by the major rivers draining the eastern Tibetan Plateau. These rivers, the Yangtze, Mekong, and Salween, are recognized today as the Three Parallel Rivers UNESCO World Heritage Site.

The Zhi Qu (Tibetan) or Tongtian River, flows within Qinghai Province of southern China. It is within the Yangtze River Basin—Chang Jiang drainage basin. 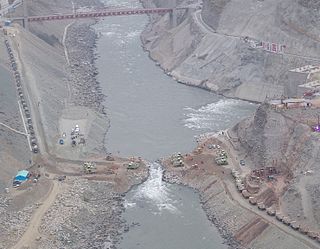 The Pubugou Dam is a concrete face rock-fill embankment dam on the Dadu River, a tributary of the Yangtze River in Sichuan Province. The main purpose of the dam is hydroelectric power generation and its total generating capacity is 3,300 MW. 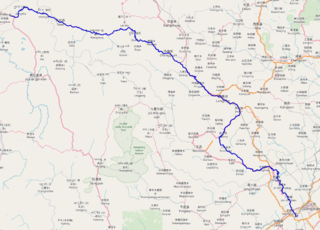 The Bailong River is a river 576km long river in the Yangtze River basin. From its source to confluence with the Jialing River, the Bailong is actually longer and is thus the main stem of the Jialing River system. The scenic Jiuzhaigou reserve is found along one of the Bailong's tributaries. Two reservoirs have been constructed in Wen County. The reservoirs serve to provide hydroelectricity, aquaculture, flood control, irrigation and for tourism development. 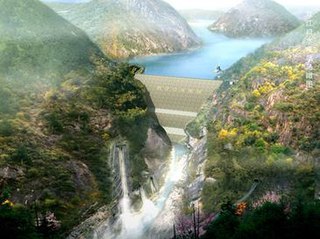 The Shuangjiangkou Dam, also referred to as Shuang Jiang Kou, is an embankment dam currently being constructed on the Dadu River in Sichuan Province, China. When completed, the 312-metre-tall (1,024 ft) dam will be the tallest dam in the world. Preliminary construction began in 2008 and the entire project was expected to be complete in 2018. By April 2011, over 200,000,000 m3 (261,590,124 cu yd) of material had been excavated from the construction site. In March 2013, China's Ministry of Environmental Protection approved construction on the dam's superstructure and associated facilities. The government acknowledged that the dam would have negative impacts on the environment but that developers were working to mitigate them. The dam is being built by the Guodian Group at a cost of US$4.02 billion. The entire construction period is expected to last 10 years. All turbines are expected to be commissioned by 2023.

The Changheba Dam is a concrete rock-filled embankment dam on the Dadu River near Kangding in Sichuan Province, China. Initial construction on the dam began in 2006, before it was officially approved in December 2010 and impounded in 2016. Its power station was fully operational in December 2017. In July 2009, a landslide at the construction site killed four people while causing damage and temporarily blocking the river.

The Houziyan Dam is a hydroelectric embankment dam on the Dadu River in Danba County, Sichuan province, China. 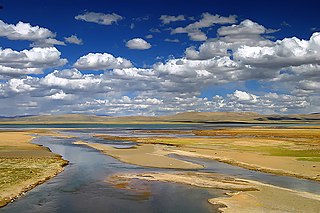 The Mar Qu, Ulan Moron or Tuotuo River is a river in Qinghai province in the People's Republic of China. Although the Dangqu is the geographic source of the Yangtze River, the Ulan Moron has been traditionally regarded as the main river. With its location in Inner Asia, it therefore belongs to the East China Sea watershed basin.

The Xingkang Bridge or Luding Yaye Expressway Bridge as is a suspension bridge in Luding County, Sichuan, China that opened in 2018. The 285 m (935 ft) high deck is one of the highest in world. The bridge forms part of the G4218 Ya'an–Kargilik Expressway carrying traffic over the Dadu River. The bridge began construction in 2014 and opened in 2018. The main span of the bridge is 1,100 m (3,600 ft) making it one of the longest ever built.

Luding Bridge is a bridge over the Dadu River in Luding County, Garzê Tibetan Autonomous Prefecture, Sichuan, China, located about 80 kilometers west of the city of Ya'an. The bridge dates from the Qing Dynasty and is considered a historical landmark. It was an important crossing on the road between Sichuan and Tibet. The bridge was the location of the Battle of Luding Bridge, one of the most important events in the Long March.