Dajare ( 駄洒落 , "wordplay") is a kind of comic Japanese word play, similar in spirit to a pun that relies on similarities in the pronunciation of words to create a simple joke.

Dajare are popular in advertising. Dajare are also associated with oyaji gags (親父ギャグ, oyaji gyagu), oyaji meaning "old man", as an "old man" would be considered by the younger generation most likely to attempt dajare, making them a near equivalent of what would be called "dad jokes" in English.

A: 大食いのたけし君も、宇宙ではあまり物を食べられないよ。 (ōgui no takeshi kun mo, uchū dewa amari mono o taberarenaiyo)
B: なぜ? (naze)
A: 宇宙には空気(食う気)がない。 (uchū niwa kūki ga nai)
Translation:
A: In space, even a glutton like Takeshi can't eat anything.
B: Why's that?
A: In space, he has no appetite.
Explanation:
Kūki (くうき) can mean either "air" (空気) or "will to eat" (食う気), thus what sounds like a perfectly reasonable statement – "in space there is no air" – takes on a much stronger meaning when said in context.

A: 向こうの通りにヘイができたんだってね。(mukou no tōri ni hei ga dekitan datte ne)
B: へぇー。(hee...)
Translation:
A: I hear they finished the wall on the street over there.
B: Well!
Explanation:
The word for "fence" or "wall" here (塀, hei) sounds very similar to the Japanese interjection hee (へえ, similar in usage to the phrases "oh yeah?" and "well!"), thus the answer sounds like a repeat of the information in the initial statement.
Another version of this same joke replaces hei with kakoi (囲い), which sounds similar to a word meaning something like "cool" or "looks good" (かっこいい).

Children's dajare (with one speaker)

There are also some jokes mostly used by children that resemble dajare. These are also considered jokes that "everybody knows" in most parts of Japan. These are examples of ginatayomi (ぎなた読み), which relies on ambiguity in where one word ends and another begins.

A: ねぇ、ちゃんとお風呂入ってる？ (nee, chanto ofuro haitteru?)
Translation:
A: Hey, have you been taking a bath (regularly)?

Can also be interpreted as:

Japanese is an East Asian language spoken by about 128 million people, primarily in Japan, where it is the national language. It is a member of the Japonic language family, and its ultimate derivation and relation to other languages such as Korean is unclear. Japonic languages have been grouped with other language families such as Ainu, Austroasiatic, and the now-discredited Altaic, but none of these proposals has gained widespread acceptance.

In traditional Chinese culture, qi or ch'i or ki is believed to be a vital force forming part of any living entity. Qi translates literally as "air" and figuratively as "material energy", "life force", or "energy flow". Qi is the central underlying principle in Chinese traditional medicine and in Chinese martial arts. The practice of cultivating and balancing qi is called qigong.

Kanji are the adopted logographic Chinese characters that are used in the Japanese writing system. They are used alongside the Japanese syllabic scripts hiragana and katakana. The Japanese term kanji for the Chinese characters literally means "Han characters". It is written with the same characters as in Traditional Chinese to refer to the character writing system, hanzi (漢字). Although some Kanji will have similar meaning and pronunciation as Chinese, some can have very different meanings and pronunciations as well e.g. 誠, meaning 'honest' in both Chinese and Japanese, is pronounced makoto or sei in Japanese, but pronounced chéng in Chinese (Standard).

Japanese is an agglutinative, synthetic, mora-timed language with simple phonotactics, a pure vowel system, phonemic vowel and consonant length, and a lexically significant pitch-accent. Word order is normally subject–object–verb with particles marking the grammatical function of words, and sentence structure is topic–comment. Its phrases are exclusively head-final and compound sentences are exclusively left-branching. Sentence-final particles are used to add emotional or emphatic impact, or make questions. Nouns have no grammatical number or gender, and there are no articles. Verbs are conjugated, primarily for tense and voice, but not person. Japanese adjectives are also conjugated. Japanese has a complex system of honorifics with verb forms and vocabulary to indicate the relative status of the speaker, the listener, and persons mentioned.

The Kansai dialect is a group of Japanese dialects in the Kansai region of Japan. In Japanese, Kansai-ben is the common name and it is called Kinki dialect in technical terms. The dialects of Kyoto and Osaka are known as Kamigata dialect, and were particularly referred to as such in the Edo period. The Kansai dialect is typified by the speech of Osaka, the major city of Kansai, which is referred to specifically as Osaka-ben. It is characterized as being both more melodic and harsher by speakers of the standard language.

Crayon Shin-chan, also known as SHIN CHAN is a Japanese manga series written and illustrated by Yoshito Usui. It follows the adventures of the five-year-old Shinnosuke "Shin" Nohara and his parents, baby sister, dog, neighbours, and best friends and is set in Kasukabe, Saitama Prefecture, Japan.

Oni is a kind of yōkai, demon, ogre, or troll in Japanese folklore. They are typically portrayed as hulking figures with one or more horns growing out of their heads. Stereotypically, they are conceived of as red, blue or white-colored, wearing loincloths of tiger pelt, and carrying iron kanabō clubs. This is a symbol of the dark side.

The classical Japanese language, also called "old writing", is the literary form of the Japanese language that was the standard until the early Shōwa period (1926–1989). It is based on Early Middle Japanese, the language as spoken during the Heian period (794–1185), but exhibits some later influences. Its use started to decline during the late Meiji period (1868–1912) when novelists started writing their works in the spoken form. Eventually, the spoken style came into widespread use, including in major newspapers, but many official documents were still written in the old style. After the end of World War II, most documents switched to the spoken style, although the classical style continues to be used in traditional genres, such as haiku and waka. Old laws are also left in the classical style unless fully revised.

As with most languages, Japanese verbs can be phonetically modified to change the purpose, nuance or meaning of the verb. These modifications are known as "verb conjugations". In the Japanese language, the beginning of a word is usually preserved during conjugations, whilst the ending of the word is altered in some way to change the meaning. Unlike other languages, Japanese verb conjugations are independent from a subject's perspective, gender and plurality.

The following words are terms used in sumo wrestling in Japan. 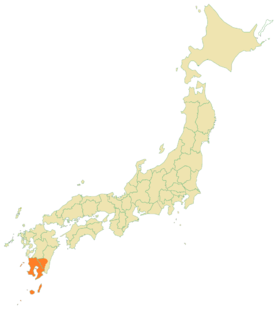 The Satsugū dialect, often referred to as the Kagoshima dialect, is a group of dialects or dialect continuum of the Japanese language spoken mainly within the area of the former Ōsumi and Satsuma provinces now incorporated into the southwestern prefecture of Kagoshima. It may also be collectively referred to as the Satsuma dialect, owing to both the prominence of the Satsuma Province and the region of the Satsuma Domain which spanned the former Japanese provinces of Satsuma, Ōsumi and the southwestern part of Hyūga. Although not classified as a separate language, the Satsugū dialect is commonly cited for its mutual unintelligibility to even its neighbouring Kyūshū variants. It shares over three-quarters of the Standard Japanese vocabulary corpus and some areal features of Kyūshū. 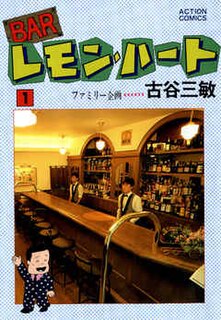 Bar Lemon Hart, sometimes referred to as "Bar Lemon Heart," is a Japanese manga series written and illustrated by Mitsutoshi Furuya and published by Futabasha since 1985. A Japanese television drama series based on the manga premiered in October 2015 on BS Fuji and had 6 episodes. A second season consisting of 26 episodes aired from April to September 2016.

Kawamoto Kōmin was a 19th-century Japanese scholar of Rangaku and also a doctor. His true name was Yutaka (裕), art name Yuken (裕軒). His father was Kawamoto Shuan, a clan doctor of Sanda Domain. Today he is known as a "father of chemistry in Japan" thanks to his works.

The grammatical particles used in the Kagoshima dialects of Japanese have many features in common with those of other dialects spoken in Kyūshū, with some being unique to the Kagoshima dialects. Like standard Japanese particles, they act as suffixes, adpositions or words immediately following the noun, verb, adjective or phrase that they modify, and are used to indicate the relationship between the various elements of a sentence.

The Hachijō language shares much of its grammar with its sister language of Japanese—having both descended from varieties of Old Japanese—as well as with its more distant relatives in the Ryukyuan language family. However, Hachijō grammar includes a substantial number of distinguishing features from modern Standard Japanese, both innovative and archaic.