Daleho Irandust (Persian : دالاهو ایراندوست‎, Persian pronunciation:  [dɒːlɒːhu irɒːnduːst] ; born 4 June 1998) is a Swedish footballer who plays as an attacking midfielder for BK Häcken in the Swedish Allsvenskan. He also represents the Swedish under-21 team and the Swedish national team. [1]

Born and raised in Gothenburg, Daleho Irandust won the Gothia Cup in 2016 with the under-19 side of BK Häcken. [2] Irandust made his debut for the senior side of Häcken with a goal and two assists on 24 August 2016 against Växjö in the 2016–17 Svenska Cupen. [2] He made his Allsvenskan debut for Häcken on 9 April 2017 against Djurgården. [1] He scored his first Allsvenskan goal for the club on 5 May 2017 against Sirius, before scoring his second a week later in a 1–0 win at Kalmar. [1] He was nominated for the newcomer of the year award at the end of the 2017 Allsvenskan season with 2 goals and 5 assists. [3]

Irandust scored a free kick against Norrby after opening the scoring against Värnamo in the 2017–18 Svenska Cupen. [4] He scored his first goal of the 2018 Allsvenskan season on 7 July 2018 against GIF Sundsvall. He made his UEFA debut in the following match with a goal and an assist on 12 July in the 2018–19 UEFA Europa League. [5] He scored another goal in the next round of the Europa League for a 1–1 draw against German Bundesliga side RB Leipzig. [6]

Irandust scored his first goal of the 2019 Allsvenskan season in their opening match against Malmö FF and provided an assist to Alexander Faltsetas in the Swedish Cup final to qualify Häcken for the 2019–20 UEFA Europa League. [7]

He scored his first goal of the 2020 Allsvenskan season in their opening match against Falkenberg before scoring from his own half a week later against IK Sirius. [8] [9]

Irandust has played for the Sweden national under-19 football team. Due to his Kurdish-Iranian heritage, Irandust is eligible to play for either Sweden or Iran. In June 2017, Irandust reaffirmed his decision to represent Sweden over Iran. [10] He was called into the Sweden national under-21 football team on 27 August 2017 for the 2019 UEFA European Under-21 Championship qualification. [11] Irandust made his debut for the under-21s on 7 June 2018 with an assist to Carlos Strandberg in a 4–0 win over Malta. [12] He was called into the under-21 squad in August 2019 for the start of their 2021 UEFA European Under-21 Championship qualification campaign. [13]

Irandust was called into the Sweden national football team by manager Janne Andersson on 3 December 2018 for their January 2019 friendly matches against Finland and Iceland. [14] He made his international debut for Sweden on 8 January 2019 against Finland. [15]

Irandust has been praised for his creativity and sharp left foot. [2]

Daleho Irandust was born and raised in Gothenburg to Kurdish-Iranian parents. [10] 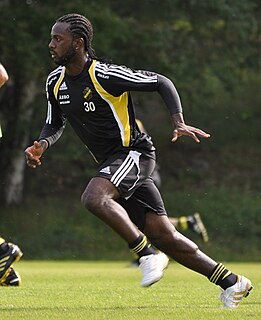 Dulee Johnson is a professional footballer. He is the son of former Liberia international player and manager Josiah Johnson.

The 2010 Allsvenskan, part of the 2010 Swedish football season, was the 86th Allsvenskan season. It began on 13 March 2010 and ended on 7 November 2010. AIK were the defending champions. Malmö FF secured their 16th title in the last round after winning with 2-0 against Mjällby AIF. 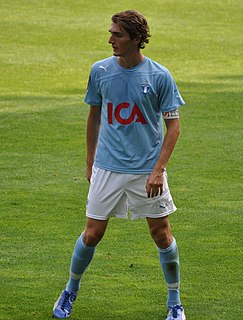 Dardan Rexhepi is a Kosovar footballer who plays for Norrby IF as a striker. He was raised in Sweden, and played for their youth football teams before playing for the senior Kosovo national football team. 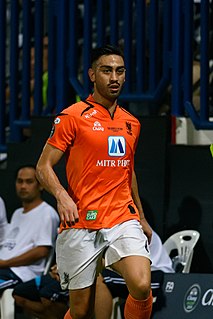 Amin Nazari is a Filipino professional footballer who plays as a midfielder for Malaysia Super League Kedah FA and the Philippines national team. 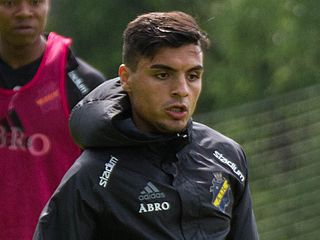 Ahmed Yasin Ghani Mousa, known as Ahmed Yasin, is an Iraqi footballer who plays for Swedish side Häcken and the Iraq national team. He joined the Iraqi national team for first time in 2012, after having played for the Iraq U23 team.

The 2014–15 Svenska Cupen was the 59th season of Svenska Cupen and the third season with the current format. The winners of the competition earned a place in the second qualifying round of the 2015–16 UEFA Europa League. If they had already qualified for European competition, in which case the qualification spot will go to fourth placed team of the 2014 Allsvenskan.

Alexander Thomas Jeremejeff is a Swedish professional footballer who plays for German club Dynamo Dresden as a forward.

The 2015 season was Djurgårdens IF's 115th in existence, their 60th season in Allsvenskan and their 15th consecutive season in the league. They were competing in Allsvenskan, Svenska Cupen. League play started in early April and lasted until early November. Pelle Olsson made his second season as manager.

The 2015 season is BK Häcken's 75th in existence and their 15th season in Allsvenskan. They will compete in Allsvenskan and Svenska Cupen.

Saman Ghoddos is an Iranian professional footballer who plays for Amiens SC in the French Ligue 1 and the Iranian national team as an attacking midfielder, striker, or winger, having previously played for the Swedish national team.

Hosam Aiesh is a Swedish footballer who plays for IFK Göteborg as a right winger or centre forward.