The street takes its name from a dam built across the River Poddle to provide water power for milling. [1] [2] First appears in records under this name around 1610 but in the 14th century was also known as "the street of Theng-mote" or Teyngmouth Street. [3] It appears later as Dammastrete and Damask-street. There was a medieval church of St. Mary del Dam which was demolished in the seventeenth century. Sir Maurice Eustace, Lord Chancellor of Ireland 1660–1665, built his townhouse, Damask, on the site. [4] There was a side street called Dame's-gate, also known as the gate of S. Mary, which was adjoining St. Mary del Dam church, recorded in 1552 and demolished in 1698. [3] The street was widened by the Wide Streets Commission in 1769, and developed into the city's financial centre. [2]

During the day, the street is busy, due to its central location in the city. It is a five-minute walk to the shopping area of Grafton Street and ten minutes from O'Connell Street. The Temple Bar area of the city is located directly north of the street. Daly's Club was founded in the 1750s at numbers 1-3 Dame Street and remained there until 1791, when it moved to College Green. [5]

The former Central Bank of Ireland headquarters, now known as Central Plaza, on Dame Street was built in 1975. It was initially higher than planning permission allowed, though this was retrospectively rectified. [6] The new building was built on a parcel of land on which was a collection of Victorian and Georgian buildings including the Commercial Buildings. The Commercial Buildings dated from 1796, and were associated with the Ouzel Galley Society. This building also featured a paved courtyard which served as a pedestrian shortcut between Merchant's Arch and the Ha'penny Bridge beyond. Initially, planners wanted the facade of the building retained, but it was discarded, and eventually, a replica was constructed in the scheme. Commenting on the scheme in September 1972, Architects' Journal stated that the proposed building was "an exercise in how to do the greatest urban damage". [7] The Bank left the premises in March 2017, and moved to North Wall Quay. [8]

In comparison, Northern Bank, retained the Italianate headquarters of the Hibernian Bank both the exterior and interior, with redevelopment taking place behind the streetscape. [9] The Allied Irish Banks opposite the Olympia Theatre was designed by Thomas Deane in 1872 for the Munster & Leinster Bank and is based on the design of the Museum Building at Trinity College. The glass and cast iron canopy of the Olympia Theatre which extends out over the footpath is a prominent landmark on the street. [2]

The street features a modern square, Barnardos Square in front of Dublin Castle and to the side of City Hall. The site had been occupied by a row of shops, one of which was the birthplace of the square's namesake, Thomas John Barnardo. [10] Before its redevelopment, the site had been cleared of the Georgian terrace of buildings which were demolished in the mid-1970s as part of a road-widening development. One of the surviving buildings from the block is the headquarters of the Sick and Indigent Roomkeepers' Society. In the 1980s there was a proposal to create a park on the site. [11]

The Occupy Dame Street protest began in October 2011 directly outside the then headquarters of the Central Bank of Ireland, as part of the global Occupy movement, and lasted until March 2012. [12] [13] [14]

College Green is a three-sided plaza in the centre of Dublin, Ireland. On its northern side is the Bank of Ireland building, which until 1800 was Ireland's Parliament House. To its east stands Trinity College Dublin. To its south stands a series of 19th-century buildings.

The General Post Office in Dublin is the headquarters of An Post, the Irish Post Office, and Dublin's principal post office. Sited in the centre of O'Connell Street, the city's main thoroughfare, it is one of Ireland's most famous buildings, not least because it served as the headquarters of the leaders of the Easter Rising. It was the last of the great Georgian public buildings erected in the capital.

Temple Bar is an area on the south bank of the River Liffey in central Dublin, Ireland. The area is bounded by the Liffey to the north, Dame Street to the south, Westmoreland Street to the east and Fishamble Street to the west. It is promoted as Dublin's 'cultural quarter' and, as a centre of Dublin's city centre's nightlife, is a tourist destination. Temple Bar is in the Dublin 2 postal district.

Baggot Street is a street in Dublin, Ireland. 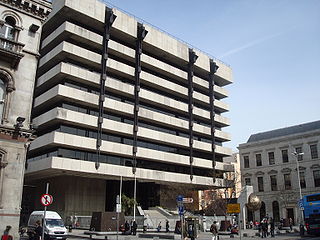 Sam Stephenson was an Irish architect who studied at the Bolton Street School of Architecture, which is now known as Technological University Dublin. Many of his buildings generated considerable controversy when they were built.

Events from the year 2009 in Ireland.

The Anglo Irish Bank hidden loans controversy began in Dublin in December 2008 when Seán FitzPatrick, the chairman of Anglo Irish Bank, admitted he had hidden a total of €87 million in loans from the bank, triggering a series of incidents which led to the eventual nationalisation of Anglo on 21 January 2009. FitzPatrick subsequently resigned his position and was followed within twenty-four hours by the bank's non-executive director, Lar Bradshaw and chief executive, David Drumm. A new chairman of Anglo, Donal O'Connor, was quickly appointed from the board, a move welcomed by the Irish Minister for Finance, Brian Lenihan. A number of investigations have been launched into the reasons behind the three resignations. The Central Bank of Ireland is carrying out a review of the bank's dealings, although its Financial Regulator, Patrick Neary, has also since resigned his position. So too did a number of other chairmen, directors and executives involved with Anglo, Irish Life and Permanent and Irish Nationwide. 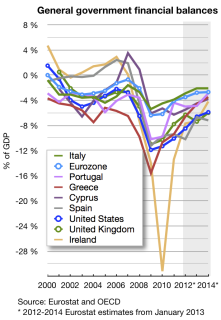 The post-2008 Irish economic downturn in the Republic of Ireland, coincided with a series of banking scandals, followed the 1990s and 2000s Celtic Tiger period of rapid real economic growth fuelled by foreign direct investment, a subsequent property bubble which rendered the real economy uncompetitive, and an expansion in bank lending in the early 2000s. An initial slowdown in economic growth amid the international financial crisis of 2007–2008 greatly intensified in late 2008 and the country fell into recession for the first time since the 1980s. Emigration, as did unemployment, escalated to levels not seen since that decade.

The 2010 student protest in Dublin was a demonstration that took place in the centre of the city on 3 November 2010 in opposition to a proposed increase in university registration fees, further cuts to the student maintenance grant and increasing graduate unemployment and emigration levels caused by the 28th Government of Ireland.

Events during the year 2011 in Ireland. 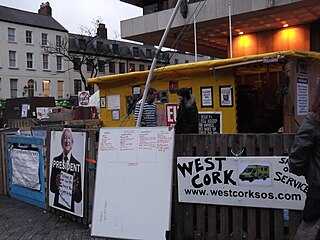 Occupy Dame Street (ODS) or Occupy Dublin was a peaceful protest and demonstration against economic inequality, social injustice and corporate greed taking place outside the Central Bank of Ireland plaza on Dame Street in Dublin, beside the Temple Bar area of the city. Part of the global Occupy movement, it took its name from the Occupy Wall Street demonstration in New York City's Wall Street financial district. Occupy Dame Street had four requests: the withdrawal of the EU/IMF from Ireland, an end to public ownership of private debt, the return to public ownership of Ireland's privatised oil and gas reserves, and the implementation of what the movement describes as "real participatory democracy". The national police force, Garda Síochána, dismantled their camp during a late-night raid on 8 March 2012. The protesters vowed to fight on. Some were never heard of again, while others found other channels of protest. The most detailed account and analysis of events was written by Helena Sheehan.

Tubridy was a talk radio show, presented by Ryan Tubridy each weekday morning on RTÉ 2fm, from September 2010 until July 2015. Along with The Colm Hayes Show, which succeeded it on the schedules until 2013, Tubridy was intended as a long-term replacement for its long-running predecessor The Gerry Ryan Show.

Events during the year 2012 in Ireland.

Occupy Cork was a peaceful protest and demonstration against alleged economic inequality, social injustice and corporate greed taking place on the junction of the Grand Parade and South Mall and at the NAMA-listed Stapleton House on Oliver Plunkett Street in the Irish city of Cork. The group occupied Stapleton House after receiving the keys to the building on 25 December 2011. The camp was dismantled on 13 March 2012.

The anti-austerity movement in Ireland saw major demonstrations from 2008 to 2015.

Beresford Place is a street in Dublin, Ireland originally laid out as a crescent surrounding The Custom House in 1792.

Earlsfort Terrace is a street in Dublin, Ireland.

Cuffe Street is a street in Dublin, Ireland which runs from St Stephen's Green at the Eastern end to Kevin Street Lower at the Western end.

Wikimedia Commons has media related to Dame Street, Dublin .
This page is based on this Wikipedia article
Text is available under the CC BY-SA 4.0 license; additional terms may apply.
Images, videos and audio are available under their respective licenses.