Ewen Daniel Mackinnon CBE (11 February 1903 –7 June 1983) was an Australian politician. The son of state MLA Donald Mackinnon,he was born in Melbourne and educated at Geelong Grammar School and then attended Oxford University. He returned to Australia as a grazier at Linton before becoming a company director and serving in the military 1938–43. In 1949,he was elected to the Australian House of Representatives as the Liberal for Wannon,but he was defeated in 1951. In 1953 he returned to the House as the member for Corangamite,having been elected in the by-election that followed the death of Allan McDonald. In 1966,Mackinnon retired from politics and was made a Commander of the Order of the British Empire (CBE). [1] [2]

In February 1967,Mackinnon was appointed Ambassador to Argentina;in 1968,while retaining the Argentinian position,he was also appointed Australia's first Ambassador to Peru and Uruguay. [3] He held these positions until 1970.

Philip Ernest Lucock,CBE was an Australian politician and Presbysterian minister. He served in the House of Representatives from 1952 to 1980,representing the Division of Lyne for the Country Party. He was Deputy Speaker for a record span of over 13 years.

John Michael Spender QC is a former Australian politician,diplomat and barrister. He was a member of the House of Representatives from 1980 to 1990,representing the Liberal Party,and was a shadow minister under Andrew Peacock and John Howard. He later served as Ambassador to France from 1996 to 2000.

Roger Levinge Dean,CBE was an Australian politician. Born in Sydney,he attended Newcastle Boys High School and Newcastle Grammar School before becoming a business executive. He served in World War II,1942–46. In 1949,he was elected to the Australian House of Representatives as the Liberal member for Robertson,defeating Labor member Thomas Williams. Dean held the seat until 1964,when he resigned to become Administrator of the Northern Territory,a position he held until 1970. In that year,he was appointed Consul-General to San Francisco,where he remained until 1974. He died in 1998.

Robert George Halverson,was an Australian politician,air force officer and diplomat. He was a member of the House of Representatives from 1984 to 1998,representing the Liberal Party. He was Speaker of the House from 1996 to 1998,and subsequently served as Ambassador to Ireland from 1998 to 2003.

Graham McDonald Harris is a former Australian politician. He was a Liberal Party of Australia member of the Australian House of Representatives from 1980 to 1983,representing the electorate of Chisholm.

Bruce Lloyd,AM is an Australian retired politician. He was Deputy Leader of the National Party 1987–93.

Donald McLeod was an Australian politician. Born in Strathmerton,Victoria,he received a primary education and worked as a farmer before enlisting in the AIF in March 1916. He served as a Gunner in the 36 Australian Heavy Artillery Group until leaving the military in April 1919 to become a soldier settler at Gringegalgona. In 1940,he was elected to the Australian House of Representatives as the Labor member for Wannon. He held the seat until his defeat by Liberal candidate Dan Mackinnon in 1949. He defeated Mackinnon in a rematch two years later. In 1954,he was nearly defeated by Liberal challenger and future Prime Minister Malcolm Fraser,holding onto his seat by only 17 votes. After a redistribution made his seat notionally Liberal,McLeod retired in 1955 and returned to farming. He died in 1963. 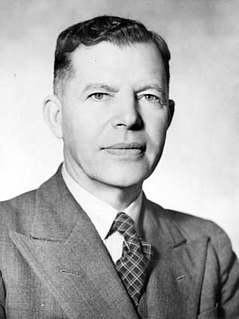 Peter Anthony Richardson is an Australian doctor and former politician. He was a member of the House of Representatives from 1975 to 1977,representing the Division of Tangney. He was elected as a member of the Liberal Party,but shortly before the 1977 federal election defected to the libertarian Progress Party and was an unsuccessful candidate for the Senate. 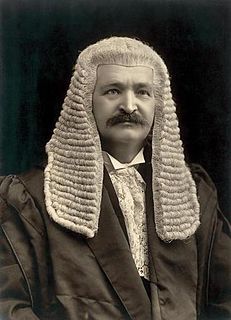 Henry Thomas Givens was an Australian politician. He served as a Senator for Queensland from 1904 until his death in 1928 and was President of the Senate from 1913 to 1926. He began his career in the Australian Labor Party (ALP),serving briefly in the Queensland Legislative Assembly (1899–1902),but became a Nationalist after the party split of 1916. He was born in Ireland and worked as a labourer,miner,trade unionist and newspaper editor before entering politics.

Douglas Clive Hannaford was an Australian politician. Born in Riverton,South Australia,a son of Walter Hannaford MLC,and one of many notable descendants of Susannah Hannaford,he was educated at Riverton and District High School with a final year at Prince Alfred College in Adelaide before returning to Riverton as a farmer. He served on District Council of Gilbert and was a co-ordinator of civil defence during World War II,having been rejected for military service due to poor health.

Gordon Sinclair Davidson was an Australian politician. He was a member of the Liberal Party and served as a Senator for South Australia. He was twice appointed to casual vacancies and later won election in his own right,serving 16 years (1965–1981). He was a grazier and church administrator before entering politics. 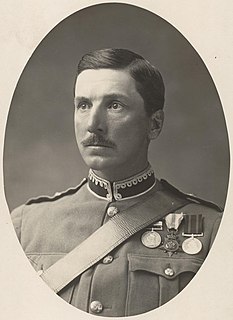 Edward Mulcahy was an Irish-born Australian politician. Born in County Limerick,he migrated to Australia as a child and was educated in Tasmania. He became an apprentice compositor and established a soft goods business in Hobart. In 1891 he was elected to the Tasmanian House of Assembly for West Hobart,serving until 1903,including a period from 1899 to 1903 when he was Minister for Lands and Works and Minister for Mines. In 1904,he was elected to the Australian Senate as a Protectionist Senator for Tasmania. Defeated as a Liberal in 1910,he returned to the House of Assembly as the member for Wilmot,serving as Minister for Lands and Works,Minister for Mines and Minister for Railways 1912–1914. In 1919,he left the Assembly and was appointed to the Senate as a Nationalist,filling the vacancy caused by Labor Senator James Long's resignation. He retired in 1919.

McEwan,an Australian Electoral Division in the Australian state of Victoria,has existed since 1984.