The Danakil Desert is a desert in northeast Ethiopia, southern Eritrea, and northwestern Djibouti. Situated in the Afar Triangle, it stretches across 136,956 square kilometres (52,879 sq mi)[ citation needed ] of arid terrain. It is inhabited by a few Afar, who engage in salt mining. The area is known for its volcanoes and extreme heat, with daytime temperatures surpassing 50 °C (122 °F). [1] Less than 25 mm (1 in) of rainfall occurs each year. [2] The Danakil Desert is one of the lowest and hottest places on Earth.

Dallol (92 metres below sea level), has the hottest average temperature recorded on earth:

Local geology is characterized by volcanic and tectonic activity, various climate cycles, and discontinuous erosion. The basic geological structure of this area was caused by the movement of tectonic plates as Africa moved away from Asia. Mountain chains formed and were eroded again during the Paleozoic. Inundations by the sea caused the formation of layers of sandstone, and limestone was deposited further offshore. As the land rose again, further sandstone formed above the limestone. Further tectonic shifts caused lava to pour out of cracks and cover the sedimentary deposits. [2]

The Danakil Desert has a number of lakes formed by lava flows that dammed up several valleys. Among these is Lake Afrera, which has thick saline crusts on its banks. Other areas of the Danikil became sinks, dry endorheic basins as precipitation evaporates faster than it can collect in permanent lakes. The area is flanked toward the east by the Danakil Alps, a tabular mountain system that has a few volcanic cones which peak in height in Mount Ramlo (2,130 metres (6,990 ft)).

A deposit of salt up to 800 metres (2,600 ft) thick can also be found in the Salt Plain flatlands. Other local lakes include Lake Asale (116 metres (381 ft) below sea level) and Lake Giuletti/Afrera 80 metres (260 ft) below sea level, both of which possess cryptodepressions in the Danakil Depression. The Afrera contains many active volcanoes, including the Maraho, Dabbahu, Afdera and Erta Ale. [2] [5]

The Afar people mine salt, loading each of their camels with up to thirty salt bricks weighing four kilograms each. It will then take two days to get to the nearest town, with guards watching the camels and guarding them from bandits. [6] 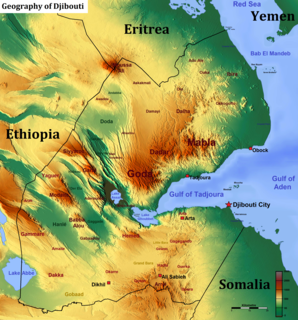 Djibouti is a country in the Horn of Africa. It is bordered by Eritrea in the north, Ethiopia in the west and south, and Somalia in the southeast. To the east is its coastline on the Red Sea and the Gulf of Aden. Rainfall is sparse, and most of the territory has a semi-arid to arid environment. Lake Assal is a saline lake which lies 155 m (509 ft) below sea level, making it the lowest point on land in Africa and the third-lowest point on Earth after the Sea of Galilee and the Dead Sea. Djibouti has the fifth smallest population in Africa. Djibouti's major settlements include the capital Djibouti City, the port towns of Tadjoura and Obock, and the southern cities of Ali Sabieh and Dikhil. It is the forty-six country by area in Africa and 147st largest country in the world by land area, covering a total of 23,200 km2 (9,000 sq mi), of which 23,180 km2 (8,950 sq mi) is land and 20 km2 (7.7 sq mi) is water.

Ethiopia is located in the Horn of Africa. It is bordered by Eritrea to the north, Djibouti and Somalia to the east, Sudan and South Sudan to the west, and Kenya to the south. Ethiopia has a high central plateau that varies from 1,290 to 3,000 m above sea level, with the highest mountain reaching 4,533 m (14,872 ft).

The Afar Triangle is a geological depression caused by the Afar Triple Junction, which is part of the Great Rift Valley in East Africa. The region has disclosed fossil specimens of the very earliest hominins; that is, the earliest of the human clade; and it is thought by some paleontologists to be the cradle of the evolution of humans, see Middle Awash, Hadar. The Depression overlaps the borders of Eritrea, Djibouti and the entire Afar Region of Ethiopia; and it contains the lowest point in Africa, Lake Assal, Djibouti, at 155 m below sea level.

Lake Karum is a salt lake in the Afar Region of Ethiopia. One of two salt lakes in the northern end of the Danakil Depression, it lies at −120 m (−394 ft) relative to sea level. The volcano Erta Ale rises southeast of this lake. 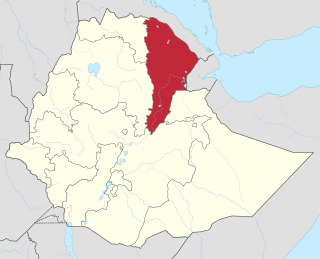 Afar Region, formerly known as Region 2, is a regional state in northeastern Ethiopia and the homeland of the Afar people. Its capital is the planned city of Semera, which lies on the paved Awash–Assab highway. 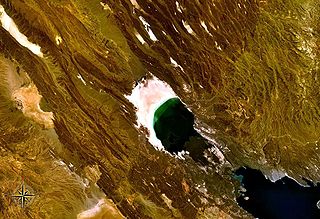 Dallol is a locality in the Dallol woreda of northern Ethiopia. Located in Administrative Zone 2 of the Afar Region in the Afar Depression, it has a latitude and longitude of 14°14′19″N40°17′38″E with an elevation of about 130 metres (430 ft) below sea level. The Central Statistical Agency has not published an estimate for the 2005 population of the village, which has been described as a ghost town.

Tat Ali is a low Holocene shield volcano located in the northern part of the Afar Region of Ethiopia. This elevation is characterized as having an elongated summit depression that has produced a variety of rock types, ranging from basalts to pantellerites. NNW-SSE-trending fissures cutting the volcano have fed basaltic lava flows; those NE of Lake Afrera are of prehistoric date. Late-stage volcanism produced youthful basaltic lava flows on the floor of the summit depression, which is also the site of prominent fumarolic activity.

The Nabro Volcano is an active stratovolcano in the Southern Red Sea Region of Eritrea. It is located at the south-east end of the Danakil Alps in the Danakil Depression. Before its 2011 eruption, the volcano was widely believed to be extinct.

Lake Afrera is a hypersaline lake in northern Ethiopia. Located in Administrative Zone 2 of the Afar Region, it is one of the lakes of the Danakil Depression. According to its entry in Lakenet, it has a surface area of 100 km2 (39 sq mi), although another source states the area is 125 km2 (48 sq mi). An unconfirmed report gives its depth as 160 m (525 ft); the lake is fed by underground streams. 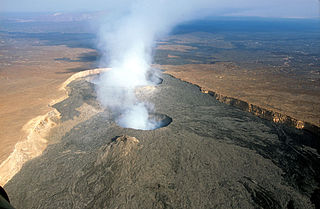 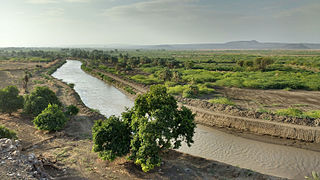 The Ethiopian xeric grasslands and shrublands ecoregion is a semi-desert strip on or near the Red Sea and the Gulf of Aden coasts in Eritrea, Ethiopia, Djibouti and Somaliland. This ecoregion lies mainly between sea level and 800 meters (m) elevation. There are, however, many hills and massifs, which range up to 1300 m as well as outstanding fault-induced depressions, such as the Danakil, lying as low as 155 m below sea level. This region is extremely active tectonically, experiencing many earthquakes and intermittently active volcanoes. Rainfall is very low and yearly averages range from 100 to 200 millimeters (mm), with less rain falling closer to the coast. There are many species of interest, including the endemic Archer's lark, a species of dragon tree, and a large suite of desert ungulates, including the last viable population of African wild ass. 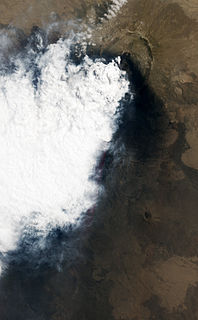 The 2011 Nabro eruption was an eruption of the Nabro stratovolcano in the Southern Red Sea Region of Eritrea, which began on 12 June 2011 after a series of earthquakes. The eruption killed seven and possibly a further 31 people and is estimated to be the highest altitude injection of sulfur dioxide (SO2) ever observed by satellite. The Mount Pinatubo eruption 20 years earlier emitted ten times more SO2. The ash cloud from the eruption reached altitudes which disrupted airline traffic in the region. Until the eruption began, the volcano had no records of historical eruptions. 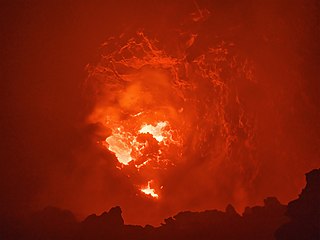 The Danakil Depression is the northern part of the Afar Triangle or Afar Depression in Ethiopia, a geological depression that has resulted from the divergence of three tectonic plates in the Horn of Africa.

The geology of Eritrea in east Africa broadly consists of Precambrian rocks in the west, Paleozoic glacial sedimentary rocks in the South and Cenozoic sediments and volcanics along the coastal zone adjoining the Red Sea. The Precambrian rocks been involved with the orogeny process, which is when a section of the Earth's crust is deformed to form a mountain range. Mesozoic sediments in the Danakil and Aysha horsts, which are raised blocks of the Earth's crust that have been lifted, were deformed. The older rocks include meta-sediments and older gneissic basement belonging to different Proterozoic terranes. Mesozoic sediments of marine origin occur in the coastal area along the Red Sea. A number of thin Miocene age basalt flows occur within the sediments of this zone whilst the basalts of the Aden Series date from Pliocene to Holocene times, some being extruded at the time of a major phase of uplift and rifting during the Pleistocene.

The Danakil Alps are a highland region in Ethiopia and Eritrea with peaks over 1000 metres in height and a width varying between 40 and 70 kilometres. The alps lie to the east of the Danakil Depression and separate it from the southern Red Sea. A rift escarpment facing the Red Sea forms the eastern boundary of the range.

Gaet'ale Pond is a small hypersaline lake located near the Dallol crater in the Danakil Depression. It is located over a hot spring of tectonic origin and has no apparent inlet or outlet streams. The water of Gaet'ale Pond has a salinity of 43%, making it the saltiest water body on Earth.

The geology of Uzbekistan consists of two microcontinents and the remnants of oceanic crust, which fused together into a tectonically complex but resource rich land mass during the Paleozoic, before becoming draped in thick, primarily marine sedimentary units. 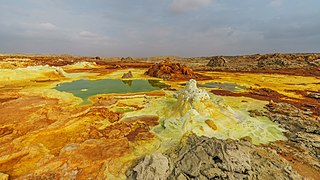 Dallol is a unique, terrestrial hydrothermal system around a cinder cone volcano in the Danakil Depression, northeast of the Erta Ale Range in Ethiopia. It is known for its unearthly colors and mineral patterns, and the very acidic fluids that discharge from its hydrothermal springs.