Daniel W. Bromley (born 1940) is an economist, the former Anderson-Bascom Professor of applied economics at the University of Wisconsin–Madison, and since 2009, Emeritus Professor. His research in institutional economics explains the foundations of property rights, natural resources and the environment; and economic development. [1] He has been editor of the journal Land Economics [2] since 1974.

Bromley graduated from Utah State University in 1963 with a degree in Ecology. He then received an M.S. (1967) and PhD (1969) in natural resource economics from Oregon State University, where his major professor was Emery Castle.[ who? ]

Since 2009, Bromley has been a visiting professor at the Faculty of Agriculture and Horticulture of the Humboldt University of Berlin, Germany. In 2011 he was honored with the Reinhard-Lust-Preis for International Transfer of Science and Culture awarded jointly by the German Alexander von Humboldt-Stiftung and the Fritz Thyssen-Stiftung.

For three years, Bromley served Chair of the U. S. Federal Advisory Committee on Marine Protected Areas. Bromley also served on a special committee of the National Academy of Sciences on climate change in the United States. [3] Bromley is a consultant, advising the Global Environment Facility, the World Bank, the Ford Foundation, the U.S. Agency for International Development, the Asian Development Bank, the Organisation for Economic Co-operation and Development, the Ministry for the Environment in New Zealand, and the Aga Khan Foundation. [3] His has consulted with the Government of National Unity in Sudan on economic recovery in the south and in Darfur and the government of Jordan on institutional reform in the water sector. [3]

In 2016, Juha Hiedanpää and Bromley published Environmental Heresies: The Quest for Reasonable, which reframes environmental conflicts and which advances a pragmatic, deliberative approach.

Bromley has been the editor of the journal Land Economics for more than 41 years. His scholarship has been concerned with more effective fisheries, economic development, and environmental policy. In an influential article, "The ideology of efficiency: Searching for a Theory of Policy Analysis", Bromley challenged conventional notions that economic efficiency analysis is "objective", finding an absence of consistency and coherence in the logical positivism of economic welfare analysis. [4] [5]

In the 2006 book, Sufficient Reason: Volitional Pragmatism and the Meaning of Economic Institutions, Bromley challenged the prevailing economic microeconomic models of rational choice; [6] he offered a competing evolutionary model of pragmatic human action where individuals "work out" their desired choices and actions as they learn what choices are available. [3] Bromley's perspective on volitional pragmatism builds on the philosophical and institutional economics work of Ludwig Wittgenstein, Friedrich Nietzsche, Charles Sanders Peirce, John Dewey, John R. Commons, Thorstein Veblen, and Richard Rorty. [6]

Sustainable development is an organizing principle for meeting human development goals while simultaneously sustaining the ability of natural systems to provide the natural resources and ecosystem services on which the economy and society depend on. The desired result is a state of society where living conditions and resources are used to continue to meet human needs without undermining the integrity and stability of the natural system. Sustainable development can be defined as development that meets the needs of the present without compromising the ability of future generations to meet their own needs.

In economic science, the tragedy of the commons is a situation in which individual users, who have open access to a resource unhampered by shared social structures or formal rules that govern access and use, act independently according to their own self-interest and, contrary to the common good of all users, cause depletion of the resource through their uncoordinated action. The concept originated in an essay written in 1833 by the British economist William Forster Lloyd, who used a hypothetical example of the effects of unregulated grazing on common land in Great Britain and Ireland. The concept became widely known as the "tragedy of the commons" over a century later after an article written by Garrett Hardin in 1968. 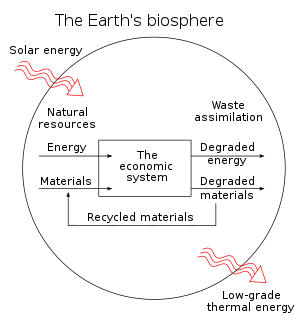 Ecological modernization is a school of thought in the social sciences that argues that the economy benefits from moves towards environmentalism. It has gained increasing attention among scholars and policymakers in the last several decades internationally. It is an analytical approach as well as a policy strategy and environmental discourse.

The Property and Environment Research Center (PERC), previously known as the Political Economy Research Center, is a free market environmental think tank based in Bozeman, Montana, United States. Established in 1980, PERC is dedicated to original research on market approaches to resolving environmental problems.

Environmental policy is the commitment of an organization or government to the laws, regulations, and other policy mechanisms concerning environmental issues. These issues generally include air and water pollution, waste management, ecosystem management, maintenance of biodiversity, the management of natural resources, wildlife and endangered species. For example, concerning environmental policy, the implementation of an eco-energy-oriented policy at a global level to address the issues of global warming and climate changes could be addressed. Policies concerning energy or regulation of toxic substances including pesticides and many types of industrial waste are part of the topic of environmental policy. This policy can be deliberately taken to influence human activities and thereby prevent undesirable effects on the biophysical environment and natural resources, as well as to make sure that changes in the environment do not have unacceptable effects on humans.

Property rights are constructs in economics for determining how a resource or economic good is used and owned. Resources can be owned by individuals, associations, collectives, or governments. Property rights can be viewed as an attribute of an economic good. This attribute has three broad components and is often referred to as a bundle of rights in the United States:

Kenneth Herald Parsons (1903–1998) was a Professor of Agricultural economics at the University of Wisconsin–Madison.

Land Economics is a peer-reviewed academic journal dedicated to the economics of natural and environmental resources. The journal was established in 1925 by the founder of the American Economic Association, Richard T. Ely. Land Economics covers such topics as environmental quality, natural resources, housing, urban and rural land use, transportation, and other areas in both developed and developing country contexts. The journal features conceptual and/or empirical work with direct relevance for public policy. The journal is published by the University of Wisconsin Press. As of 2019, Land Economics had an impact factor of 1.620.

Burton A. Weisbrod is an American economist who pioneered the theory of option value and also advanced methods for benefit-cost analysis of public policy by recognizing the roles of externality effects in program evaluation. He applied those methods to the fields of education, health care, poverty and nonprofit organization. Over a career of fifty years, he published 16 books and over 200 scholarly articles. He is currently the John Evans Professor of Economics and a Faculty Fellow of the Institute for Policy Research at Northwestern University.

Gary Don Libecap is a Distinguished Professor of Corporate Environmental Management at the Bren School of Environmental Science & Management and Distinguished Professor of Economics at the University of California Santa Barbara. Libecap is a research associate at the National Bureau of Economic Research; a research fellow at the Hoover Institution; and a senior fellow at the Property and Environment Research Center, and a member of the Research Group on Political Institutions and Economic Policy, Harvard University. He was the Pitt Professor of American History and Institutions at Cambridge University 2010-11, and was previously the Anheuser Busch Professor of Entrepreneurial Studies, Economics, and Law at the University of Arizona.

Thomas Harry (Tom) Tietenberg is an American economist and environmentalist, and Emeritus Professor at Colby College, known for his work in the field of resource-based economy.