He was born at Fintry in Stirlingshire. [2] At the age of thirteen he was apprenticed, alongside Horatio McCulloch and Leitch the water colourist, to the landscape artist John Knox. He afterwards worked for a year as a lithographer, and was employed by a company in Cumnock, Ayrshire (Smiths of Cumnock), to paint the ornamental lids of their sycamore-wood snuff-boxes. [3]

He studied in Edinburgh at the Trustees' Academy, where he supported himself by illustrating publications for William Home Lizars the engraver. Moving to Glasgow, he established himself as a fashionable portrait painter. In 1829 he was admitted as a member of the Royal Scottish Academy. He does not appear as an independent property owner until 1840 when he is listed as a portrait painter living at 126 West Regent Street in Glasgow. [4]

On the death of Sir George Harvey in 1876 he was elected President of the Royal Scottish Academy. From then until his death he remained in Edinburgh, where, according to the 1911 Encyclopædia Britannica , "his genial social qualities and his inimitable powers as a teller of humorous Scottish anecdotes rendered him popular". [3] He lived at 6 Learmonth Terrace in Edinburgh's fashionable West End. [5]

He was knighted by Queen Victoria in 1877. In the same year he was elected a Fellow of the Royal Society of Edinburgh. His proposers were Thomas Brumby Johnston, John Hutton Balfour, Sir Andrew Douglas Maclagan and Sir Charles Wyville Thomson. [6]

Several of Macnee's works are held by the National Portrait Gallery in London and at the National Gallery of Scotland in Edinburgh.

Macnee is buried in Dean Cemetery in western Edinburgh with his wife Mary Buchanan, and children, Constance and Thomas Wiseman Macnee. They lie against the north wall of the northern extension.

He was first married to Margaret (1810–1847) by whom he had at least seven children, including Horace Macnee CE. She is buried in Glasgow Necropolis. [7]

His daughter Isabella Wiseman was the subject of his masterpiece "Lady in Grey" (1859), which is held in the National Gallery of Scotland. [8]

His great-grandson was the actor Patrick Macnee. 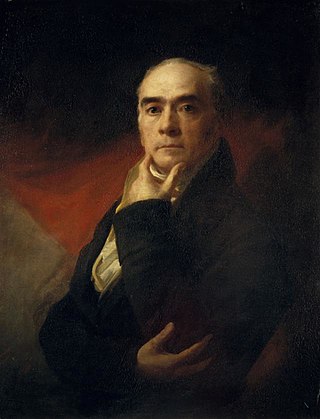 Fintry is a small riverside village in Stirlingshire, central Scotland.

Sir Francis Grant was a Scottish portrait painter who painted Queen Victoria and many distinguished British aristocratic and political figures. He served as President of the Royal Academy.

Samuel Bough (1822–1878) was an English-born landscape painter who spent much of his career working in Scotland.

David Cowan Dobson (1894–1980) was a leading Scottish portrait artist. Dobson was born in Bradford to Scottish parents and around 1920 moved to London.

James Coutts Michie ARSA was a Scottish painter who specialised in landscapes and portraits.

Sir William Fettes Douglas (1822–1891) was a Scottish painter and art connoisseur, rising to be President of the Royal Scottish Academy.

Patric Park was a Scottish sculptor. 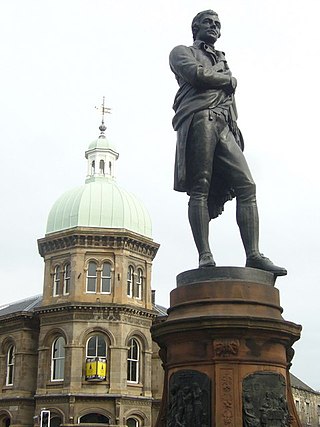 David Watson Stephenson was a Scottish sculptor, executing portraits and monuments in marble and bronze.

James Fillans was a Scottish sculptor, poet and artist with a short but influential career in the early 19th century. 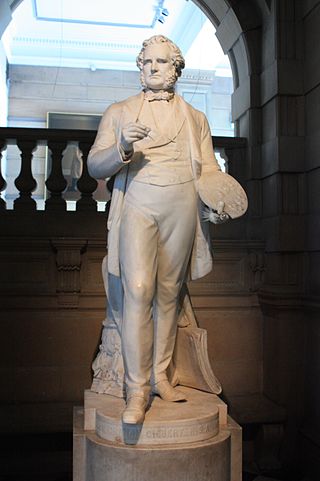 John Graham-Gilbert was a Scottish portrait painter and art collector.

Dr Henry Marshall FRSE (1775–1851) was a Scottish military surgeon, hygienist and medical author. He served as Inspector General of all British military hospitals in the early 19th century. He is known as the “founder of military medical statistics”. He also campaigned strongly for the abolition of flogging as an army punishment.

John Knox (1778–1845) was a 19th-century Scottish landscape artist who painted in the style of Alexander Nasmyth. He is noted for adopting unusual positions from which to paint, such as mountaintops.