Daniel Papebroch, S.J., [1] (17 March 1628 – 28 June 1714) was a Flemish Jesuit hagiographer, one of the Bollandists. He was a leading revisionist figure, bringing historical criticism to bear on traditions of saints of the Catholic Church.

Papebroch was born in 1628 in Antwerp, then in the Duchy of Brabant, part of the Spanish Netherlands, and attended the Jesuit college in his hometown. He came from a pious family that had chosen Jesuit Jean Bolland as its spiritual director. Bolland took a great interest in Daniel's education and encouraged him to learn Greek and other languages and to study literary composition. From 1644 to 1646 Papebroch studied philosophy at Douai, after which he entered the novitiate of the Society of Jesus. [2] He was ordained a Catholic priest in 1658.

In 1660 Papebroch began his work with Bolland, in the scholarly study of the hagiography of the Catholic saints. He was assigned to work on the records of those saints celebrated in the month of March. [2] In July of that year, Bolland sent the 32-year-old Papebroch to Italy, along with Godfrey Henschen, to collect documents, [3] but by the time he returned Bolland had died. Paperbroch, together with Henschen, then continued the work in the tradition of the Bollandists. He continued this work until his death in 1714.

Herbert Thurston considered Pabenbroch "the ablest of all the early Bollandists." [4] According to Friedrich Heer, Pabenbroch "...by dint of hard work established the laws of historical criticism, the methodology of the study of sources and of the historical auxiliary sciences. [5] Hippolyte Delehaye called Papebroch "the Bollandist par excellence". [2]

Papebroch prefixed a Propylaeum antiquarium, an attempt to formulate rules for the discernment of spurious from genuine documents, to the second volume (1675) of the Acta Sanctorum . He instanced in it as spurious some charters of the Abbey of St-Denis. Dom Jean Mabillon was appointed to draw up a defense of these documents, and was provoked into another statement of the principles of documentary criticism, his De re diplomatica (1681). [6]

Another controversy Papebroch had was with the Dominican friar, Jean-Antoine d'Aubermont, over some major liturgical texts traditionally attributed to St. Thomas Aquinas. [7]

Pope Adrian III or Hadrian III was Pope from 17 May 884 to his death. According to Jean Mabillon, his birth name was Agapitus. He served for little more than a year, during which he worked to help the people of Italy in a very troubled time of famine and war.

The Bollandists or Bollandist Society are an association of scholars, philologists, and historians who since the early seventeenth century have studied hagiography and the cult of the saints in Christianity. Their most important publication has been the Acta Sanctorum. They are named after the Flemish Jesuit Jean Bolland or Bollandus (1596–1665).

Acta Sanctorum is an encyclopedic text in 68 folio volumes of documents examining the lives of Christian saints, in essence a critical hagiography, which is organised according to each saint's feast day. The project was conceived and begun by Jesuit Heribert Rosweyde. After his death in 1629, the Jesuit scholar Jean Bolland continued the work, which was gradually finished over the centuries by the Bollandists, who continue to edit and publish the Acta Sanctorum.

Diplomatics, or diplomatic, is a scholarly discipline centred on the critical analysis of documents: especially, historical documents. It focuses on the conventions, protocols and formulae that have been used by document creators, and uses these to increase understanding of the processes of document creation, of information transmission, and of the relationships between the facts which the documents purport to record and reality.

Dom Jean Mabillon, O.S.B., was a French Benedictine monk and scholar of the Congregation of Saint Maur. He is considered the founder of the disciplines of palaeography and diplomatics. 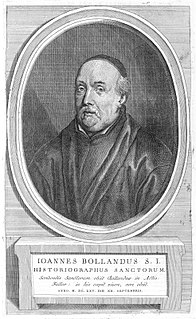 Jean Bolland was a Jesuit priest and prominent Flemish hagiographer.

Hippolyte Delehaye, S.J., was a Belgian Jesuit who was a hagiographical scholar and an outstanding member of the Society of Bollandists.

Jacques-Philippe Lallemant was a French Jesuit, of whom little is known beyond his writings. He took part in the discussion on the Chinese rites, and wrote the “Journal historique des assemblées tenues en Sorbonne pour condamner les Mémoires de la Chine”, a defense of his confrère Lecomte against the Sorbonnist, Jacques Lefèvre.

François Baert was a Belgian Jesuit hagiographer, one of the Bollandists.

Dom Thierry Ruinart (1657–1709) was a French Benedictine monk and scholar. He was a Maurist, and a disciple of Jean Mabillon.

Heribert Rosweyde was a Jesuit hagiographer. His work, quite unfinished, was taken up by Jean Bolland who systematized it, while broadening its perspective. This is the beginning of the association of the Bollandists.

Papal diplomatics is the scholarly and critical study (diplomatics) of the authentic documents of the Papacy, largely to distinguish them from spurious documents. The study emerges in the Middle Ages and has been further refined in the centuries since.

Conrad Janninck was one of the Bollandists who worked on the Acts of the Saints. Appointed to the task in 1679, he became one of the editors of the many volumes in the series. When his colleague, the Jesuit Daniel van Papenbroeck was under attack from the Spanish Inquisition and others opposed to the rigorous scholarly work of the Bollandists, Janninck spent several years in Rome on his behalf.