Danyang (simplified Chinese :丹阳; traditional Chinese :丹陽; pinyin :Dānyáng) is a county-level city located on the southwest (right) bank of the Yangtze River, and is under the administration of Zhenjiang, Jiangsu province, China. It is noted for the production of optical lenses used in sunglasses and eyeglasses. Danyang has a total area of 1,059 km2 (409 sq mi) and a population of[ when? ] roughly 890,000. Danyang locals speak a dialect of Wu Chinese, and the city is on the linguistic borderline between Wu Chinese and Jianghuai Mandarin.

During the period of the four Southern Dynasties (Nan Chao) from 420 to 589 A.D. when China's national capital was in Jiankang (modern Nanjing), Danyang was the hometown of the emperors of the Southern Qi (479-502) and Liang Dynasties (502-557), who were buried in the countryside outside the city. Today 11 of these Southern Dynasties imperial tombs can still be found to the east and northeast of the city. They are notable for their unique stone statues of mythical animals marking the sacred way (shen dao) leading to each imperial tomb.

As one of the key cities in the Yangtze River Delta open to foreign trade, Danyang has shown strong economic and standard-of-living growth since 2000. In 2007, the GDP and per capita GDP of Danyang reached 35.7 billion yuan (US$4.7 billion) and 44,242 yuan (US$6,061) respectively. Danyang's economy was 16th in a 2010 ranking of China's top county-level cities.

Businesses from 32 countries and regions have invested in Danyang with accumulated paid-in capital of US$1 billion. As a developing city within the Shanghai economic sphere of influence, Danyang has attracted domestic and foreign businesses. The main industries in Danyang are prescription eyewear, tools and hardware, and automobile parts.

The Spectacles City, located in Danyang, is one of the largest eyeglass merchandise centers in China. [4] Built in 1986, the market center's construction occurred in three phases. [5] It subsequently merged with the Huayang Spectacles and Yunyang Spectacles markets. It covers an area of over 344,445 square feet (32,000 square meters).

There are three railway stations in Danyang:

The high-speed trains (typically, listed in schedules as G-series or D-series trains) take about an hour and a half [6] to get to Shanghai and about 30 minutes to get to Nanjing, the provincial capital. Direct service to Beijing from Danyang North Station takes about 4 hours and 30 minutes.

Danyang is known for its barley gruel and huangjiu (yellow wine), which has traditional medicinal properties. 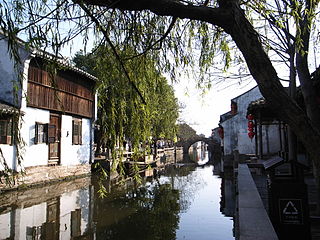 Jiangsu is an eastern coastal province of the People's Republic of China. It is one of the leading provinces in finance, education, technology, and tourism, with its capital in Nanjing. Jiangsu is the third smallest, but the fifth most populous and the most densely populated of the 23 provinces of the People's Republic of China. Jiangsu has the highest GDP per capita of Chinese provinces and second-highest GDP of Chinese provinces, after Guangdong. Jiangsu borders Shandong in the north, Anhui to the west, and Zhejiang and Shanghai to the south. Jiangsu has a coastline of over 1,000 kilometres (620 mi) along the Yellow Sea, and the Yangtze River passes through the southern part of the province.

Jiangyin is a county-level city on the southern bank of the Yangtze River, and is administered by Wuxi, Jiangsu province. Jiangyin is one of the most important transport hubs on the Yangtze River, it is also one of the most developed counties in China. With 1,595,138 inhabitants as of the 2010 census,[1] the city is now part of Jiangyin-Zhangjiagang-Jingjiang built-up or metropolitan area with 3,526,260 inhabitants 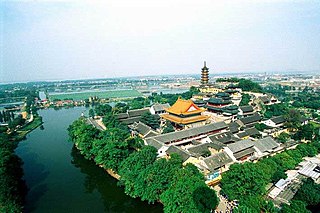 Zhenjiang, alternately romanized as Chinkiang, is a prefecture-level city in Jiangsu Province, China. It lies on the southern bank of the Yangtze River near its intersection with the Grand Canal. It is opposite Yangzhou and between Nanjing and Changzhou. Zhenjiang was formerly the provincial capital of Jiangsu and remains as an important transportation hub. As of the 2020 census, its total population was 3,210,418 inhabitants whom 1,266,790 lived in the built-up area made of the 3 urban districts. The town is best known both in China and abroad for its fragrant black vinegar, a staple of Chinese cooking.

Liyang is a county-level city under the administration of Changzhou in the Jiangsu province of the People's Republic of China. In 2011, it had a population of about 781,500. It borders the prefecture-level divisions of Wuxi to the east, Xuancheng (Anhui) to the south, and Nanjing to the west.

Qidong is a county-level city under the administration of the prefecture-level city of Nantong in southeastern Jiangsu province, China. It is located on the north side of the Yangtze River opposite Shanghai and forms a peninsula jutting out into the East China Sea. It has a population of 1.12 million.

Jiangyan District is one of three urban districts of the city of Taizhou, Jiangsu province, having been, until December 2012, a county-level city. Jiangyan is noted for being the birthplace of the former General Secretary of the Chinese Communist Party Hu Jintao.

Haimen is a district of Nantong, Jiangsu province, with a population of approximately 1 million. It is located at the opposite side of the Yangtze River to Shanghai and is directly north of Chongming Island except for a small portion that forms Haimen District's Haiyong Town. Haimen is the seat of the Roman Catholic Diocese of Haimen. Haimen is located in the poorer north Jiangsu region and together with Qidong City, traditionally has one of the highest rates of liver cancer in China and in the world, with upwards of 1 out of every 10 adults in the rural areas dying from liver cancer.

Dangtu County is one of three counties under the jurisdiction of the prefecture-level city of Ma'anshan in the southeast of Anhui Province, China.

Jingjiang is a county-level city under the administration of Taizhou, Jiangsu province, China. It is located on the northern (left) bank of the Yangtze River, and is the southernmost part of Taizhou City, bordering Nantong to the northeast, Suzhou to the southeast, Wuxi to the south, Changzhou to the southwest, and Zhenjiang to the west. The area of Jingjiang is 655.6 square kilometres and the population was 684,360 at the 2010 census.

Dantu District is one of three districts of Zhenjiang, Jiangsu province, China. A development called Dantu New City was constructed in the district and was underoccupied since around 2005 and criticized as a ghost city by international media. However, since 2013 the development has been filling up with residents with many operating shops and offices, becoming a functional suburb of urban Zhenjiang. 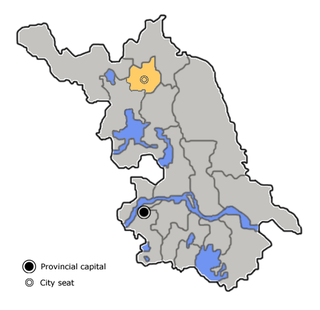 Shuyang is a county in northern Jiangsu province. It is under the administration of the prefecture-level city of Suqian. Shuyang sits on the Northern Jiangsu Plains and borders the cities of Xuzhou, Lianyungang and Huai'an to the north, east and south.

The Shanghai–Nanjing intercity railway or Huning intercity railway is a 301-kilometer (187 mi)-long high-speed rail line between Shanghai and Nanjing, the capital of Jiangsu province. Hù and Níng are shorthand Chinese names for Shanghai and Nanjing, respectively. The Huning intercity high-speed railway largely follows the route of the preexisting Nanjing-Shanghai section of the conventional Beijing–Shanghai railway and the Beijing–Shanghai high-speed railway. Construction of this high-speed railway began in July 2008. The line went into test operations in early April 2010, and opened for full service on July 1, 2010. The line has a design speed of 350 km/h (217 mph). The journey time between the two cities has been shortened from 120 minutes to 73 minutes on nonstop trains. According to the arrangements of related departments, 120 pairs of trains are operating on the line, and the time interval between services is 5 minutes at the shortest.

The Danyang–Kunshan Grand Bridge is a 164.8-kilometre-long (102.4 mi) viaduct on the Beijing–Shanghai High-Speed Railway. It is the longest bridge in the world.

Wikimedia Commons has media related to Danyang .
This page is based on this Wikipedia article
Text is available under the CC BY-SA 4.0 license; additional terms may apply.
Images, videos and audio are available under their respective licenses.