Dappula de Livera PC is a Sri Lankan lawyer and the former Attorney General of Sri Lanka. He previously served as the Solicitor General of Sri Lanka from February 2018 and took over as acting attorney general from 29 April 2019 until his formal appointment in May 2019.

Educated at St. Joseph's College and St. Anthony's College, Kandy, he studied law at Sri Lanka Law College, taking oaths as an Attorney-at-Law of the Supreme Court of Sri Lanka in 1984. [1]

In 2002, he gained an LLM from the University College London and holds a Diploma in International Relations from the Bandaranaike Centre for International Studies. He was appointed as a President's Counsel in 2014. [1]

During his tenure at the Attorney General's Department he had served as a member of the National Commission against the Proliferation of Small Arms and Light Weapons; and the Task Force established by the Ministry of Justice to deal with human smuggling and illegal migration; legal consultant and member of the advisory board of the Financial Intelligence Unit of the Central Bank of Sri Lanka. He had worked as the senior legal counsel to the special presidential commission appointed to inquire into issues relating to the maintenance of law and order and was the chief prosecutor commission of inquiry on bond issuance. [1]

On 18 February 2018, he was appointed Solicitor General and served till 29 April before Dilrukshi Dias Wickramasinghe took over from him. After holding the Solicitor General position, he was appointed as the acting Attorney General after Jayantha Jayasuriya was appointed as Chief Justice of Sri Lanka. His appointment was confirmed on 7 May by the Constitutional Council and was sworn in on 10 May 2019. He retired from the position of Attorney General in May 2021 and was replaced by Sanjay Rajaratnam in the relevant position. [2] [3] [4] [5]

He is married to activist Marini De Livera. [1] 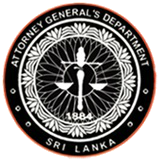 Halkedaliya Lekamlage alias Mahawela Lekamlage Premalal Jayasekara, also known by his pseudonym Choka Malli is a Sri Lankan convicted murderer, politician, and is a member of the Parliament of Sri Lanka and a former government deputy minister.

Chitta Ranjan De Silva, PC was a Sri Lankan lawyer. He was Attorney General and Solicitor General of Sri Lanka. He was the Chairman of the Lessons Learnt and Reconciliation Commission 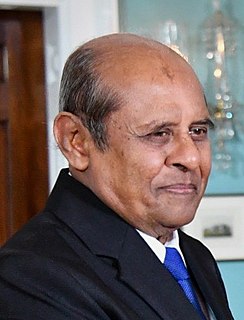 Tilak Janaka Marapana PC is a Sri Lankan lawyer. He is the current Minister of Foreign Affairs and Development Assignments. He is a Member of Parliament appointed from the national list and had served as Minister of Law and Order, Prison Reforms from September 2015 to November 2015 and Minister of Defence (2001–2003) and Minister of Transport, Highways and Aviation (2002–2004). As Minister of Defence, he was the only non Presidential or Prime Ministerial holder of the portfolio. A lawyer by profession and a President's Counsel, he had served as a government prosecutor in the Attorney General's Department for twenty six years, serving as Solicitor General and Attorney General.

Deshamanya Justice Victor Tennekoon QC was a Sri Lankan lawyer and jurist. He served as the 35th Chief Justice of Sri Lanka, as well as the 33rd Attorney General and 23rd Solicitor General. From 1979 to 1984 Tennekoon served as Chancellor of the University of Peradeniya.

Justice Priyasath Dep PC is a Sri Lankan judge and lawyer. He was the 45th Chief Justice of Sri Lanka and a former Solicitor General of Sri Lanka.

Yasantha Kodagoda is a Puisne Justice of the Supreme Court of the Democratic Socialist Republic of Sri Lanka. He was called to the Bar as an Attorney-at-Law of the Supreme Court of Sri Lanka on 28 October 1988. Prior to being appointed by the President of Sri Lanka as the President of the Court of Appeal in March 2019, he served as an Additional Solicitor General of the Attorney General's Department. Having joined the Attorney General's Department of Sri Lanka in 1989 as a State Counsel, he rose to the positions of Senior State Counsel (1999), Deputy Solicitor General (2005), Senior Deputy Solicitor General (2014) and Additional Solicitor General (2015). He has 30+ years of experience as a Public Prosecutor and Legal Advisor to the Government of Sri Lanka. His specialization is in the field of criminal justice. In 2015, in recognition of his eminence in the legal profession, he was appointed President's Counsel. He completed his primary and secondary education at Ananda College Colombo he was a president Scout of ananda college and then attended Sri Lanka Law College. He obtained Master's degree in Public International Law with Merit (LL.M.) from the University College London (UCL) He acted as the Director of the Advanced Legal Studies Unit of the Sri Lanka Law College and the Director of the Institute of Advanced Legal Studies of the Incorporated Council of Legal Education. He has served many Commissions of Inquiry as representative Counsel of the Attorney General. For over a decade, he has represented Sri Lanka before the UN Human Rights Commission and the UN Human Rights Council. He has also represented Sri Lanka before the UN Security Council's Working Group on Children in Armed Conflict, and has served as the Accredited Representative of the Government of Sri Lanka at the UN Committee Against Torture. He was a member of the EU-Sri Lanka Working Group on Trade and Economic Relations Cooperation 2016 and actively participated in Sri Lanka gaining the GSP+ trade concessions. Kodagoda is known as a book reviewer

Jayantha Chandrasiri Jayasuriya Sinhala:ජයන්ත චන්ද්‍රසිරි ජයසූරිය PC is a lawyer who is the 47th and current Chief Justice of Sri Lanka. Jayasuriya was approved by the Constitutional Council on the 26 April 2019 and sworn in three days later on the 29 April, succeeding Chief Justice Nalin Perera. He previously served as the 45th Attorney General of Sri Lanka. While serving as Attorney General Jayasuriya defended the sacking of the Prime Minister by the President of Sri Lanka but was over-ruled by the Supreme Court. Jayasuriya controversially requested an extension of the term of office of President Sirisena prior to being made Chief Justice. The Supreme Court over-ruled that request.

Dilrukshi Dias Wickramasinghe also simply known as Dilrukshi Dias is the 46th Solicitor General of Sri Lanka. She has held several posts during her career including the position of Director General of the Bribery Commission. In September 2019, she involved in controversies regarding the direct links which she maintained with Avant Garde chairmain Nissanka Senadhipathi. In October 2019, Sanjay Rajaratnam replaced Dilrukshi Dias as the acting Solicitor General following the controversial phone call with Avant Garde chairman.