A data cable is any media that allows baseband transmissions (binary 1,0s) from a transmitter to a receiver. 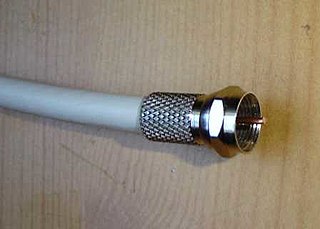 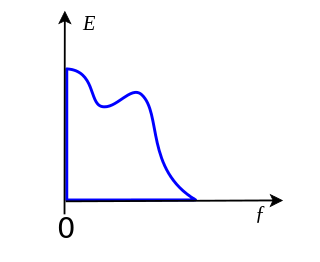 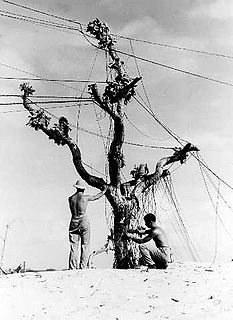 In telecommunication and data transmission, serial communication is the process of sending data one bit at a time, sequentially, over a communication channel or computer bus. This is in contrast to parallel communication, where several bits are sent as a whole, on a link with several parallel channels.

In electronics, electrical termination is the practice of ending a transmission line with a device that matches the characteristic impedance of the line. This is intended to prevent signals from reflecting off the end of the transmission line. Reflections at the ends of unterminated transmission lines cause distortion which can produce ambiguous digital signal levels and mis-operation of digital systems. Reflections in analog signal systems cause such effects as video ghosting, or power loss in radio transmitter transmission lines.

A PHY, an abbreviation for "physical layer", is an electronic circuit, usually implemented as an integrated circuit, required to implement physical layer functions of the OSI model in a network interface controller. 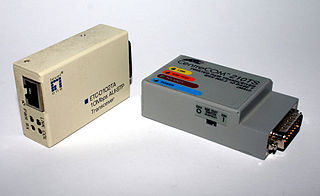 In telecommunications, structured cabling is building or campus cabling infrastructure that consists of a number of standardized smaller elements called subsystems.

Asynchronous Serial Interface, or ASI, is a method of carrying an MPEG Transport Stream (MPEG-TS) over 75-ohm copper coaxial cable or multimode optical fiber. It is popular in the television industry as a means of transporting broadcast programs from the studio to the final transmission equipment before it reaches viewers sitting at home.

Multichannel Audio Digital Interface (MADI) or AES10 is an Audio Engineering Society (AES) standard that defines the data format and electrical characteristics of an interface that carries multiple channels of digital audio. The AES first documented the MADI standard in AES10-1991, and updated it in AES10-2003 and AES10-2008. The MADI standard includes a bit-level description and has features in common with the two-channel AES3 interface.

A video router, also known as a video matrix switch or SDI router, is an electronic switch designed to route video signals from multiple input sources such as cameras, VT/DDR, computers and DVD players, to one or more display devices, such as monitors, projectors, and TVs.

Physical media refers to the physical materials that are used to store or transmit information in data communications. These physical media are generally physical objects made of materials such as copper or glass. They can be touched and felt, and have physical properties such as weight and color. For a number of years, copper and glass were the only media used in computer networking.