Dausa is named after a hill near the city that was called Devgiri.[ clarification needed ] On the top of hill is situated a fort, built by Badgujar kings, who were the orininal rulers of this area. Later, Dausa was given by Chauhans to Kachwahas, but the centre of their power shifted to Amber.

When Akbar went to Ajmer as a pilgrim to Khwaja Moinuddin Chisti in 1562, he stayed in Dausa and met with Rupsi Baragi, Hakim of Dausa at the time and brother of Bharmal. Agriculture is the main occupation of the people of Dausa. The main crops of the district are wheat, bajra, rapeseed, mustard and groundnuts.

Udham Singh Nagar District is a district of Uttarakhand state in northern India. Rudrapur is the district headquarters. This district consists of seven Tehsils named Bajpur, Gadarpur, Jaspur, Kashipur, Kichha, Khatima, Sitarganj. The district is located in the Terai region, and is part of Kumaon Division. It is bounded on the north by Nainital District, on the northeast by Champawat District, on the east by Nepal, and on the south and west by Bareilly, Rampur, Moradabad, Pilibhit and Bijnor District of Uttar Pradesh state. The district was created in October 1995 by Mayawati government out of Nainital District. It is named for freedom fighter and Indian revolutionary Udham Singh.

Dausa is a city and administrative headquarters of Dausa district in the state of Rajasthan, India. It is 55 km from Jaipur, 240 km from Delhi and located on Jaipur-Agra National Highway (NH-11). It is also known as "Dev Nagari." 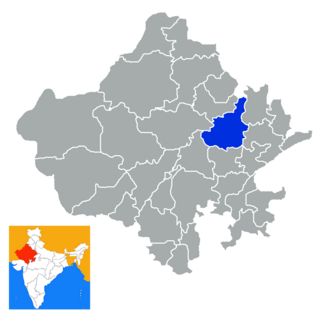 Jaipur District is a district of the state of Rajasthan in Northern India. The city of Jaipur, which is Rajasthan's capital and largest city, is the district headquarters. It is the tenth most populous district in India.

Chaksu is a town and a municipality in Jaipur district in the state of Rajasthan, India. The town is situated at a distance of 40 km from Jaipur on National Highway 52. Town is also one of the 13 tehsil headquarters of Jaipur District. Chaksu is also a legislative assembly of rajasthan and current MLA of chaksu is Ved Prakash Solanki. In this town SAVS ngo are also work for social community.

Gangapur City is a Nagar Parishad in Sawai Madhopur District in the state of Rajasthan, India. In terms of population, it is the 18th largest city in Rajasthan.

Mahwa is a census town in Mahwa Mandal, Dausa district in the Indian state of Rajasthan.

Mandawar is a town in the Dausa district in the Indian state of Rajasthan. It is 138 km from Jaipur, 53 km from Hindaun City, 221 km from Delhi. Mandawa is known for its Pahadband temple situated on hill which is part of Aravali range.

Sri Madhopur or Shrimadhopur is a city and a municipality in Sikar district in the Indian state of Rajasthan. It is one of the six tehsils of the district. Shrimadhopur city have a importance for business of clothes and as well as for agricultural crops. In ancient times the city was very famous because of industry of making utensils of aluminum and utensils were only available in this city. But along with passage of time the city lost it's importance for utensil production. The Shrimadhopur sub district is tenth largest tehsil in Rajasthan state.

Uniara is a town and a municipality in Tonk district in the Indian state of Rajasthan. it is a tehsil of Tonk district.

Binega or Vinega is a small village/hamlet located approximately 8 km (5 mi) from Gangapur City in Sawai Madhopur District of Rajasthan State, India. It comes under Vinega Panchayath. It belongs to Bharatpur Division. It is located 73 km towards north from district headquarters Sawai Madhopur and 120 km from state capital Jaipur

Phagi is a tehsil and a panchayat samiti in Jaipur district in the state of Rajasthan, India. It has an average elevation of 383 m (1,257 ft). Phagi is also one of the Town in Phagi Tehsil in Jaipur District. Phagi is located on the intersection of SH2 and SH12 of Rajasthan.

River Morel originates in the hills near Dharla and Chainpura villages in Bassi Tehsil of Jaipur District, second branch makes by receiving water from the catchment area of foothills of Paplaj Mataji mountains, district Dausa, rajasthan. It flows southeast for 29 km, then southwest for 35 km, up to the confluence with river Dhund, and then southeast for 83 km in Jaipur, Dausa and Sawai Madhopur Districts, before joining Banas river near Hadoli of Sawai Madhopur District. Major part of Morel river flows in District Dausa and Sawai Madhopur of state Rajasthan. Dausa, Lawan and Lalsot tehsils are the tehsil areas of Dausa District which contribute as major part of its water catchment area and flow route. Major villages such as Kaluwas, Mohammedpura, Bilka, Ranoli etc. are situated on the bank of this river. Civilization of these villages is very old and this great river was called as life line of these civilizations. The village Kaluwas was situated earlier on the bank of this river but after heavy flood, the village was shifted about one KM away.

Kailadevi is a village in Karauli Tehsil, in the Karauli District of the Indian state of Rajasthan. It falls under the Bharatpur Division. It is 26 km south of the district center Karauli, and 146 km from the state capital, Jaipur.

Tholai is a village in Jamwa Ramgarh tehsil in Jaipur District of Rajasthan State, India. It belongs to Jaipur Division. It is located 40 km towards East from district headquarters Jaipur. 6 km from Jamwa Ramgarh. 37 km from state capital Jaipur.