Last updated April 16, 2021
American football player
Not to be confused with David Behrman.

David Wesley Behrman (November 9, 1941 – December 9, 2014) was an American football offensive lineman who played in the American Football League for the Buffalo Bills and Denver Broncos. He was the fourth overall pick in the 1963 AFL Draft by the Bills and the 11th pick in the 1963 NFL Draft by the Chicago Bears. He also played in the Midwest Football League for the Lansing All Stars / Capitals and Flint Sabres from 1972 to 1976.

Behrman was the Bills' first-round draft pick in 1963 and played for them that year, but not in 1964. During the 1965 AFL season, Behrman became the Bills' starting center, [2] replacing veteran Walt Cudzik, playing between left offensive guard Billy Shaw and right guard Al Bemiller. However, due to a back injury, Behrman did not play when the Bills won their second AFL Championship game over the San Diego Chargers by a score of 23-0 under head coach Lou Saban. That season, Behrman was an AFL All-Star center. However, he did not play in 1966, replaced by Bemiller.

Behrman played with the AFL's Denver Broncos during the 1967 AFL season when he played in 11 games. 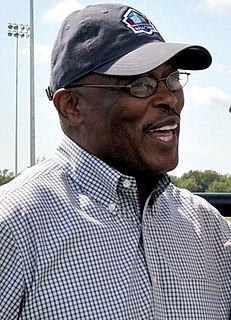 Luke Bradley Bombardir is a Canadian retired professional ice hockey player who played for the New Jersey Devils, Minnesota Wild and the Nashville Predators in the NHL. He currently serves as the Minnesota Wild's Director of Player Development and Senior Director of Community Relations.

George William Wilson, Jr. was an American football player. He played college football at Xavier University and professionally for the American Football League's (AFL) 1966 expansion team, the Miami Dolphins. In 1965, Wilson was selected in the 20th round of the National Football League draft by the Detroit Lions, with the overall 277th pick. However, he eventually signed with the AFL's Buffalo Bills, who drafted him as the 96th pick in the 12th round of the Red Shirt draft. In 1966, Wilson was traded to the Miami Dolphins in exchange for a 13th round 1967 draft pick. At the time, the Dolphins' head coach was his father, George Wilson, Sr.

The Youngstown Hardhats were a semi-professional football team who played in the 1970s. The team was based in Youngstown, Ohio, and competed in the Midwest Football League from 1972 to 1974 and 1976, and Mid-Atlantic Football League in 1977.

Richard John Lucas is a former American football quarterback. He played college football at Pennsylvania State University from 1957 to 1959 and professionally in the American Football League (AFL) with the Buffalo Bills from 1960 to 1961 and the Denver Broncos in 1962.

The 1961 Buffalo Bills season was the team's second year in the American Football League. The Bills played in the Eastern division, winning six games, losing eight, and missing the postseason. 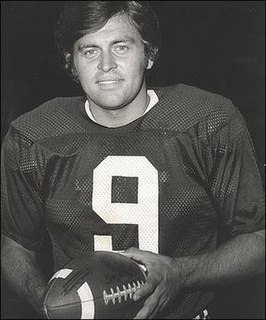 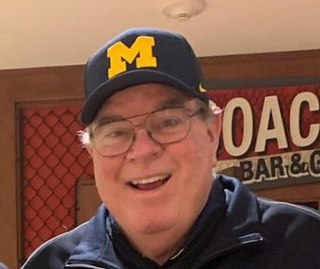 James Patrick Brandstatter is an American sports announcer. He is the radio play-by-play for the Michigan Wolverines football team. He held the position of color commentator for the Detroit Lions for 31 years until the end of the 2017 season. Brandstatter is also a sports television show host and former radio show host; both TV and radio shows about Michigan football. He played college football for the Wolverines, from 1969 to 1972, where he was a standout offensive tackle. Brandstatter has written two non-fiction books about UM experiences, both of which were best-sellers in the sports category. His other positions include the two-time president of the Detroit Sports Broadcasters Association. Brandstatter leaving the Detroit Lions radio broadcast was announced on July 10, 2018. 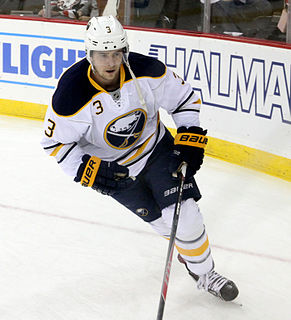 Mark Alexander Terrance Pysyk is a Canadian professional ice hockey defenceman and forward who is currently playing for the Dallas Stars of the National Hockey League (NHL). Pysyk was originally selected in the first round, 23rd overall, in the 2010 NHL Entry Draft by the Buffalo Sabres.

Cody Eakin is a Canadian professional ice hockey forward currently playing for the Buffalo Sabres of the National Hockey League (NHL). He was selected by the Washington Capitals in the third round, 85th overall, of the 2009 NHL Entry Draft and has previously played for the Washington Capitals, Dallas Stars, Vegas Golden Knights and Winnipeg Jets.

Thomas A. Cecchini is a former American football player and coach. He played college football as an All-Big Ten Conference linebacker at the University of Michigan, and he held coaching positions with Xavier University, University of Iowa, and the Minnesota Vikings. In two years as the head coach at Xavier, he compiled a record of 8–13–1.

Thomas LeRoy Beard Jr. is a former professional American football center who played with the Buffalo Bills in 1972. He was drafted by the Denver Broncos in the eighth round of the 1971 NFL Draft, and also played for the Lansing All Stars of the Midwest Football League in 1971.

The Midwest Football League (MFL) was a low-level professional American football league that played games from 1962 to 1978. The league was based mainly in Michigan, until the collapse of the Continental Football League in 1969, when it became more of a regional league.