David Wilcox (born September 29, 1942) is a retired professional football player, a linebacker with the San Francisco 49ers of the National Football League from 1964 through 1974. Wilcox was selected to play for seven Pro Bowls and was named All-NFL five times during his career. He was elected to the Pro Football Hall of Fame in 2000. [1]

After graduating from Vale High School in eastern Oregon in 1960, Wilcox began his college football career at Boise Junior College (now Boise State University) and earned junior college All-America honors. [2] After two years in Boise under head coach Lyle Smith, he transferred to the University of Oregon in Eugene in 1962 for his final two campaigns under head coach Len Casanova; [3] His older brother Johnny Wilcox had played for the Ducks on the 1957 team that went to the Rose Bowl, [2] and was selected in the 1960 NFL Draft by the Philadelphia Eagles (15th round).

Wilcox was a guard on offense and an end on defense, and teammates at Oregon included Mel Renfro and quarterback Bob Berry. [4] After his senior season in 1963, Wilcox played in the Hula Bowl, Coaches’ All-America Bowl, and the College All-Star Game the following August. He became the first defensive lineman in Hula Bowl history to earn outstanding lineman honors. Both the Houston Oilers of the young American Football League and the San Francisco 49ers of the NFL sought to sign the Oregon star. The Oilers selected him in the sixth round (46th player overall) of the AFL draft, [5] while the 49ers tapped him in the third round (29th overall) of the NFL draft, held two days later. [4] [6]

The 6 ft 3 in (1.91 m), 241-pound (109 kg) Wilcox opted to sign with the more established 49ers where he went on to star for 11 seasons. Converted to outside linebacker, Wilcox quickly established himself as one of the league’s finest. Nicknamed "The Intimidator," he was ideally suited for the position, both mentally and physically. Known for his ability to disrupt plays, he was particularly tough on tight ends. He did not let anybody easily off the line of scrimmage whether to block or get into a pass route. Always prepared, Wilcox was a true student of the game and worked to be fundamentally correct.

During the 1964–1974 span, the 49ers had a winning record in four seasons (1965, 1970, 1971, 1972), and made the playoffs in three consecutive seasons (1970, 1971, 1972) under head coach Dick Nolan. [7] In 1970, San Francisco won the NFC West division title with a win-lost-tie record of 10–3–1. In a divisional game of the 1970 NFL Playoffs, San Francisco defeated the Minnesota Vikings 17–14, holding them to 124 net passing yards and 117 yards rushing. [8] However, they lost the NFC championship game to the Dallas Cowboys. [9] In 1971, the 49ers had a particularly good year on defense, allowing only 216 points (15.4 points/game), 6th least in the NFL, and won the NFC West with a record of 9-5. They won their divisional game of the 1971 NFL Playoffs over the Washington Redskins, [10] allowing only 99 yards rushing and 93 net passing yards, but again lost the NFC championship game to Dallas. [11] In 1972, San Francisco won the NFC West for the third straight year with a record of 8-5-1, allowing on defense 249 points (17.8 points/game), 9th in the league. But they lost their divisional game of the 1972 NFL Playoffs to Dallas, thus eliminated by the Cowboys three consecutive years. In those three years, Wilcox at left side linebacker formed a strong tandem with middle linebacker Frank Nunley and right linebacker Skip Vanderbundt.

He thrived on action and wanted it all directed his way. "What I do best," Wilcox once stated, "is not let people block me. I just hate to be blocked." Hall of Fame linebacker Joe Schmidt was impressed by his strength. "He gave us fits," he remarked. "The lead block had to really come out hard to take him out because he was so strong." Aided by his speed and long reach, he was also effective in pass coverage and managed to intercept 14 passes during his career. [6]

Following each season, San Francisco would rate their players based on their performance. The typical score for a linebacker was 750. Wilcox’s score in 1973 was 1,306. That season the veteran linebacker recorded 104 solo tackles, four forced fumbles, and tackled opposing ball carriers for a loss 13 times. Durable, Wilcox missed only one game during his career due to injury. Four times he was named All-NFL (1967, 1971, 1972, 1973) by the AP and two times All-NFC (1971, 1972). He was also selected to play in seven Pro Bowls. [6]

Born in the eastern Oregon city of Ontario, Wilcox had six sisters and one brother. Wilcox played high school football at nearby Vale Union High School. [12] He lives in Junction City, [13] near Eugene, where his sons Justin and Josh also played football for the Oregon Ducks. [12] [14] Justin Wilcox currently serves as the head coach for the California Golden Bears, a Pac-12 Conference foe of Oregon.[ citation needed ] 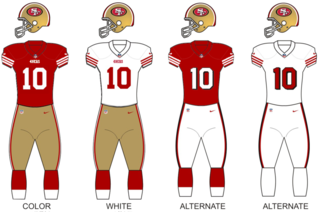 The San Francisco 49ers are a professional American football team based in the San Francisco Bay Area. The 49ers compete in the National Football League (NFL) as a member of the league's National Football Conference (NFC) West division, and play their home games at Levi's Stadium in Santa Clara, California, located 38 miles (61 km) southeast of San Francisco. The team is named after the prospectors who arrived in Northern California in the 1849 Gold Rush.

Charles Lewis Haley is a former American football outside linebacker and defensive end who played in the National Football League (NFL) for the San Francisco 49ers and the Dallas Cowboys (1992–1996). 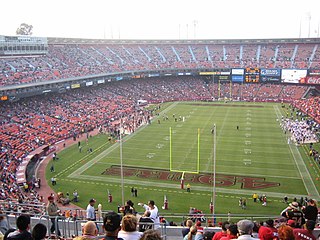 The Catch was the winning touchdown reception in the 1981 NFC Championship Game played between the Dallas Cowboys and San Francisco 49ers at Candlestick Park on January 10, 1982, as part of the playoffs following the 1981 NFL season. With 58 seconds left in the game and the 49ers facing 3rd-and-3, San Francisco wide receiver Dwight Clark made a leaping grab in the back of the end zone to complete a 6-yard touchdown pass from quarterback Joe Montana, enabling the 49ers to defeat the Cowboys, 28–27. The Catch is widely regarded as one of the most memorable events in National Football League (NFL) history. It came at the end of a 14-play, 83-yard drive engineered by Montana. The game represented the end of the Cowboys' domination in the NFC since the conference's inception in 1970, and the beginning of the 49ers' rise as an NFL dynasty in the 1980s.

The NFC Championship Game is the annual championship game of the National Football Conference (NFC) and one of the two semi-final playoff games of the National Football League (NFL), the largest professional American football league in the world. The game is played on the last Sunday in January by the two remaining playoff teams, following the NFC postseason's first two rounds. The NFC champion then advances to face the winner of the AFC Championship Game in the Super Bowl.

Leonard Barnett Davis is an American former college and professional football player who was an offensive lineman for twelve seasons in the National Football League (NFL). He played college football for the University of Texas, and was recognized as a consensus All-American. Davis was drafted by the Arizona Cardinals with the second pick overall of the 2001 NFL Draft, and also played professionally for the Dallas Cowboys, Detroit Lions and San Francisco 49ers of the NFL.

John Hugh Niland is a former American football offensive guard in the National Football League (NFL) for the Dallas Cowboys and Philadelphia Eagles. He was a six-time Pro Bowler and a three-time All-Pro. He played college football at the University of Iowa.

James Davis Stuckey is a former American college and professional football player who was a defensive tackle in the National Football League (NFL) for seven seasons during the 1980s. Stuckey played college football for Clemson University, and was recognized as an All-American. A first-round pick in the 1980 NFL Draft, he played professionally for the San Francisco 49ers and New York Jets of the NFL.

The 1981 San Francisco 49ers season was the franchise's 32nd season in the National Football League, their 36th overall and their third under head coach Bill Walsh.

The 1994 season was the San Francisco 49ers' 45th in the National Football League, the 49th overall and their sixth under head coach George Seifert. This season was highlighted by a victory in Super Bowl XXIX. The championship made San Francisco the first team to win five Super Bowls. After losing to the Dallas Cowboys in the previous two conference championship games, the 49ers made significant acquisitions in the 1994 free agent market. This included the signing of two-sport star Deion Sanders and Cowboys linebacker Ken Norton, Jr.. Sanders had a major impact on the team's success, winning the NFL Defensive Player of the Year Award and recording six interceptions. The 49ers won their division, the NFC West, for the eighth time in nine seasons.

The 1971 Dallas Cowboys season was the franchise's 12th season in the National Football League, the first at the new Texas Stadium in suburban Irving, Texas and the 12th season under head coach Tom Landry. The Cowboys led the NFL with 406 points scored. Their defense allowed 222 points.

The 1964 San Francisco 49ers season was the franchise's 15th season in the National Football League, their 19th overall and the 7th under head coach Victor Morabito. They improved on their 2–12 record from 1963, with 4 wins to 10 losses. However, yet again the team failed to qualify for playoffs for the 7th consecutive season.

The 49ers–Cowboys rivalry is a National Football League (NFL) rivalry between the San Francisco 49ers and the Dallas Cowboys. The Cowboys lead the series 19–18–1. It is one of the great inter-division rivalry games in the NFL. The two teams do not play every year; instead, they play once every three years due to the NFL's rotating division schedules, or if the two teams finish in the same place in their respective divisions, they would play the ensuing season. Sports Illustrated ranked it as the eighth best rivalry while the NFL Top 10 ranked this rivalry to be the tenth best in the NFL. The rivalry was also the subject of two 2015 episodes of NFL Network's The Timeline entitled "A Tale of Two Cities" with actors Sam Elliott (Cowboys) and Jeremy Renner (49ers) as narrators.

Anthony Hitchens is an American football linebacker who is a free agent. He was drafted by the Dallas Cowboys in the fourth round of the 2014 NFL Draft. He played college football at the University of Iowa.

Arik Armstead is an American football defensive end for the San Francisco 49ers of the National Football League (NFL). He played college football at Oregon and was drafted by the 49ers in the first round of the 2015 NFL Draft.