In fluid dynamics, the Davey–Stewartson equation (DSE) was introduced in a paper by A. Davey and Keith Stewartson (1974) to describe the evolution of a three-dimensional wave-packet on water of finite depth.

and a real (mean-flow) field

The DSE is an example of a soliton equation in 2+1 dimensions. The corresponding Lax representation for it is given in Boiti, Martina & Pempinelli (1995).

Itself, the DSE is the particular reduction of the Zakharov–Schulman system. On the other hand, the equivalent counterpart of the DSE is the Ishimori equation.

The DSE is the result of a multiple-scale analysis of modulated nonlinear surface gravity waves, propagating over a horizontal sea bed.

The sine-Gordon equation is a nonlinear hyperbolic partial differential equation in 1 + 1 dimensions involving the d'Alembert operator and the sine of the unknown function. It was originally introduced by Edmond Bour (1862) in the course of study of surfaces of constant negative curvature as the Gauss–Codazzi equation for surfaces of curvature −1 in 3-space, and rediscovered by Frenkel and Kontorova (1939) in their study of crystal dislocations known as the Frenkel–Kontorova model. This equation attracted a lot of attention in the 1970s due to the presence of soliton solutions.

In mathematics, the Korteweg–de Vries (KdV) equation is a mathematical model of waves on shallow water surfaces. It is particularly notable as the prototypical example of an exactly solvable model, that is, a non-linear partial differential equation whose solutions can be exactly and precisely specified. KdV can be solved by means of the inverse scattering transform. The mathematical theory behind the KdV equation is a topic of active research. The KdV equation was first introduced by Boussinesq and rediscovered by Diederik Korteweg and Gustav de Vries (1895).

Burgers' equation or Bateman–Burgers equation is a fundamental partial differential equation occurring in various areas of applied mathematics, such as fluid mechanics, nonlinear acoustics, gas dynamics, traffic flow. The equation was first introduced by Harry Bateman in 1915 and later studied by Johannes Martinus Burgers in 1948. 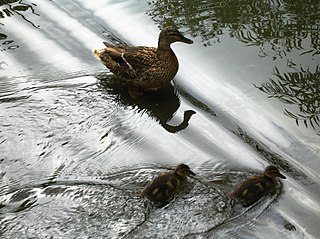 In optics, an ultrashort pulse of light is an electromagnetic pulse whose time duration is of the order of a picosecond or less. Such pulses have a broadband optical spectrum, and can be created by mode-locked oscillators. They are commonly referred to as ultrafast events. Amplification of ultrashort pulses almost always requires the technique of chirped pulse amplification, in order to avoid damage to the gain medium of the amplifier. 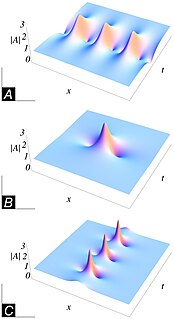 In theoretical physics, the (one-dimensional) nonlinear Schrödinger equation (NLSE) is a nonlinear variation of the Schrödinger equation. It is a classical field equation whose principal applications are to the propagation of light in nonlinear optical fibers and planar waveguides and to Bose-Einstein condensates confined to highly anisotropic cigar-shaped traps, in the mean-field regime. Additionally, the equation appears in the studies of small-amplitude gravity waves on the surface of deep inviscid (zero-viscosity) water; the Langmuir waves in hot plasmas; the propagation of plane-diffracted wave beams in the focusing regions of the ionosphere; the propagation of Davydov's alpha-helix solitons, which are responsible for energy transport along molecular chains; and many others. More generally, the NLSE appears as one of universal equations that describe the evolution of slowly varying packets of quasi-monochromatic waves in weakly nonlinear media that have dispersion. Unlike the linear Schrödinger equation, the NLSE never describes the time evolution of a quantum state. The 1D NLSE is an example of an integrable model.

In theoretical physics, Nordström's theory of gravitation was a predecessor of general relativity. Strictly speaking, there were actually two distinct theories proposed by the Finnish theoretical physicist Gunnar Nordström, in 1912 and 1913 respectively. The first was quickly dismissed, but the second became the first known example of a metric theory of gravitation, in which the effects of gravitation are treated entirely in terms of the geometry of a curved spacetime.

In mathematics and physics, the Kadomtsev–Petviashvili equation – or KP equation, named after Boris Borisovich Kadomtsev and Vladimir Iosifovich Petviashvili – is a partial differential equation to describe nonlinear wave motion. The KP equation is usually written as:

The Ishimori equation (IE) is a partial differential equation proposed by the Japanese mathematician Ishimori (1984). Its interest is as the first example of a nonlinear spin-one field model in the plane that is integrable Sattinger, Tracy & Venakides.

Dispersionless limits of integrable partial differential equations (PDE) arise in various problems of mathematics and physics and have been intensively studied in recent literature. They typically arise when considering slowly modulated long waves of an integrable dispersive PDE system.

In mathematical physics and the theory of partial differential equations, the solitary wave solution of the form is said to be orbitally stable if any solution with the initial data sufficiently close to forever remains in a given small neighborhood of the trajectory of .

The Kundu equation is a general form of integrable system that is gauge-equivalent to the mixed nonlinear Schrödinger equation. It was proposed by Anjan Kundu. as