Frank James Lampard is an English professional football manager and former player who was most recently the head coach of Premier League club Chelsea. As a player, he is widely considered to be one of Chelsea's greatest ever players, and one of the greatest midfielders of his generation.

LaVar RaShad Arrington is a former American football linebacker who played in the National Football League (NFL) for seven seasons. He played college football at Penn State and was drafted by the Washington Redskins in the first round of the 2000 NFL Draft.

Ethan Byron Moreau is a Canadian former professional ice hockey player. Moreau was selected in the first round of the 1994 NHL Entry Draft, 14th overall, by the Chicago Blackhawks of the National Hockey League (NHL). He also played with the Edmonton Oilers, Columbus Blue Jackets and the Los Angeles Kings of the NHL. He currently serves as an assistant coach for Niagara University.

Brian Demond Waters is a former American football guard. He was signed by the Dallas Cowboys as an undrafted free agent in 1999 out of the University of North Texas. He played most of his career for the Kansas City Chiefs, and also played for the New England Patriots. He earned six Pro Bowl selections during his career.

Maksim Aleksandrovich Shatskikh is an Uzbek professional football coach and a former player of Russian origin. He is an assistant coach with Russian club FC Rotor Volgograd.

SP Kyoto FC was a Japanese football club based in Muko, Kyoto, Japan. They played for the last time in Japan Football League for 2015 season.

The NC State Wolfpack football team represents North Carolina State University in the sport of American football. The Wolfpack competes in the NCAA Division I Football Bowl Subdivision (FBS) of the National Collegiate Athletic Association (NCAA) and the Atlantic Division of the Atlantic Coast Conference (ACC). Prior to joining the ACC in 1953, the Wolfpack were a member of the Southern Conference. As a founding member of the ACC, the Wolfpack has won seven conference championships and participated in 31 bowl games, of which the team has won 17, including eight of their last 11. NC State is coached by Dave Doeren. 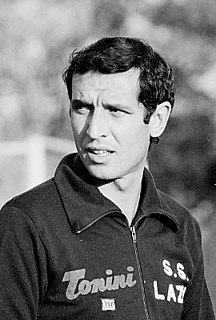 Alberto "Albertino" Bigon is an Italian football manager and former player, who played as a midfielder or forward. 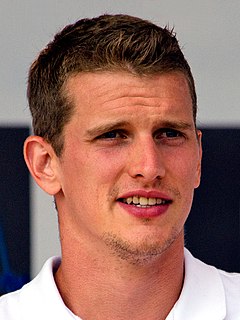 Giulio Caravatta is a former Canadian football quarterback who currently serves as a Canadian Football League analyst on CKST and Rogers Sportsnet. 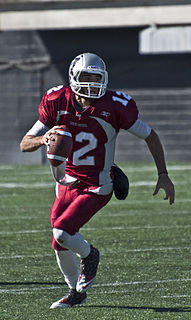 Amir Arsalan Motahari is an Iranian footballer who currently plays for Esteghlal in the Persian Gulf Pro League as a striker.

Arthur Clifford Darch was a Canadian football player who played for the Hamilton Tiger-Cats and Toronto Argonauts. He won the Grey Cup with Hamilton in 1953. He previously played football at Stamford Collegiate in his hometown of Niagara. After his football career he worked in the insurance industry and with CBC Television. He is a member of the Niagara Falls Sports Wall of Fame. Darch died in 2013 in Hamilton.