David Gervasi (born 1 August 1983 in Poschiavo, Graubünden) is a decathlete from Switzerland. He set his personal best score (7755 points) in the men's decathlon on 1 June 2008 at the 2008 Hypo-Meeting in Götzis. Gervasi is a two-time national champion in the men's decathlon: 2005 and 2006.

Poschiavo is a municipality in the Bernina Region in the canton of Grisons in Switzerland.

The 34th edition of the annual Hypo-Meeting took place on May 31 and June 1, 2008 in Götzis, Austria. The track and field competition, featuring a decathlon (men) and a heptathlon (women) event was part of the 2008 IAAF World Combined Events Challenge. 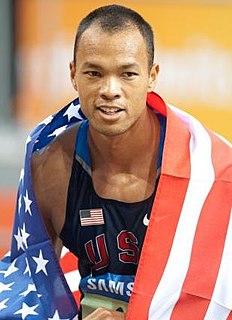 These are the official results of the men's decathlon at the 1996 Summer Olympics in Atlanta, Georgia.

These are the official results of the Men's Decathlon competition at the 1991 World Championships in Tokyo, Japan. There were a total number of 27 participating athletes, excluding three non-starters, and the competition starting on Thursday August 29, 1991, and ending on Friday August 30, 1991.

These are the official results of the Men's Decathlon competition at the 1988 Summer Olympics in Seoul, South Korea. There were a total number of 39 participating athletes, with five competitors who didn't finish the competition.

The men's decathlon competition at the 1998 European Athletics Championships in Budapest, Hungary, was held on 18 August and 19 August 1998. The event was one of the permit meetings of the inaugural 1998 IAAF World Combined Events Challenge.

The men's decathlon competition at the 2002 European Athletics Championships was held on 7 August and 8 August 2002 in Munich, Germany.

These are the official results of the men's decathlon competition at the 2003 World Championships in Athletics in Paris, France. There were a total number of 20 participating athletes, including eight non-finishers. The competition started on Monday 26 August 2003 and ended on Tuesday 27 August 2003.

The men's decathlon at the 2008 Summer Olympics took place between August 21 and 22, at the Beijing National Stadium.

Simon Roderick Poelman is a former New Zealand decathlete, who has been described as New Zealand's best ever all-round athlete. In the decathlon, his personal best of 8359 points is still a New Zealand national record. This was set at the national athletics championships in Christchurch 1987. As well as being the national decathlon champion seven times. He was also the New Zealand senior men's national champion in several individual events including the 100m (once), 110m hurdles, long jump (twice), pole vault, and shot put (once).

These are the official results of the Men's Decathlon competition at the 1980 Summer Olympics in Moscow, USSR. There were a total number of 21 participating athletes, with the competition starting on 25 July 1980, and ending on 26 July 1980. 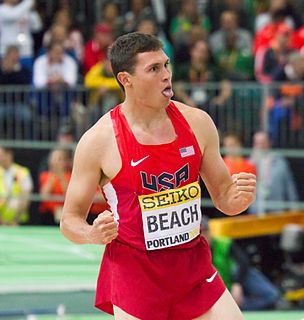 Curtis Beach is an American decathlete who competed for Duke University. He formerly held high school records in the decathlon using three different implement standards: high school, international junior and international senior. His performances in the high jump, 400 meters, and 1,500 meters were superior to those of U.S. Olympic gold medalist Bryan Clay in the 2008 Olympic Games. At the 2011 NCAA Men's Outdoor Track and Field Championship, as a freshman, Beach finished second overall in the decathlon. His 3:59.13 finish in the 1500 meter shattered the previous collegiate record and is the second-fastest 1500 meter in world history for a decathlon, just missing Robert Baker's mark from 1980. 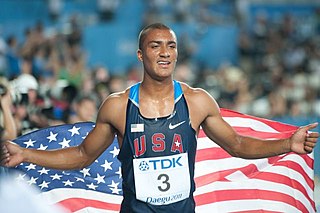 Ashton James Eaton is a retired American decathlete and two-time Olympic champion, who holds the world record in the indoor heptathlon event. Eaton was the second decathlete to break the 9,000-point barrier in the decathlon, with 9,039 points, a score he bettered on August 29, 2015, when he beat his own world record with a score of 9,045 points. His world record was broken by Frenchman Kévin Mayer on September 16, 2018 with a total of 9,126 points, who become the third man to pass the 9,000-point barrier.

The men's decathlon event at the 2007 Pan American Games took place on July 23 and July 24, 2007. There were a total number of 12 athletes competing, from 9 nations. Jamaica's Maurice Smith took the gold with 8278 points, a new Games record, while Cuban Yordanis García became second with 8113 and Brazilian Carlos Eduardo Chinin was third with 7977.

The men's decathlon competition at the 2016 Summer Olympics in Rio de Janeiro, Brazil. The event was held at the Olympic Stadium between 17–18 August.

The men's decathlon at the 2018 Commonwealth Games, as part of the athletics programme, took place in the Carrara Stadium on 9 and 10 April 2018.