David Griggs (February 5, 1967 – June 19, 1995) was a linebacker in the National Football League for six seasons, compiling 14.5 sacks, 1 interception, and four fumble recoveries. He started in Super Bowl XXIX for the San Diego Chargers. Griggs attended the University of Virginia. He grew up in Delair in Pennsauken Township, New Jersey, where he attended and played football for Pennsauken High School. [1] He died at the age of 28 in Fort Lauderdale, Florida in 1995 when his speeding car slid off an expressway ramp from Florida's Turnpike and collided with a sign pole. [2] 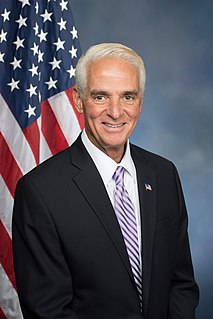 Charles Joseph Crist Jr. is an American politician and lawyer who has been the U.S. Representative from Florida's 13th congressional district since 2017. The district is based in Pinellas County, including St. Petersburg. He served as the 44th governor of Florida from 2007 to 2011.

Derrick Dewan Brooks is an American former professional football player who was a linebacker in the National Football League (NFL) for 14 seasons. He played college football for the Florida State Seminoles, and was twice recognized as a consensus All-American. He was drafted by the Tampa Bay Buccaneers in the first round of the 1995 NFL Draft, where he played his entire professional career. An 11-time Pro Bowl selection and nine-time All-Pro, Brooks was named AP NFL Defensive Player of the Year in 2002, and earned a championship ring with the Buccaneers in Super Bowl XXXVII. Later, he was elected to the 2000s all decade defensive team. He was elected to the Pro Football Hall of Fame in 2014. He was the co-owner and president of the Tampa Bay Storm of the Arena Football League from 2011 to 2017. 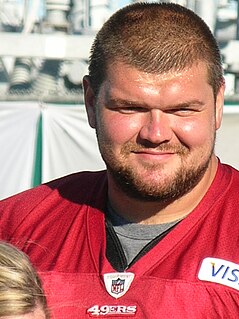 David Andrew Baas is a former American football center. He played college football for the University of Michigan, and was recognized as a consensus All-American and the top college center. The San Francisco 49ers selected him in the second round of the 2005 NFL Draft, and he was a member of the New York Giants' Super Bowl XLVI championship team against the New England Patriots. 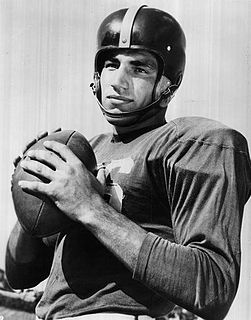 Richard Jose Casares was an American college and professional football player who was a fullback in the National Football League (NFL) and American Football League (AFL) for twelve seasons during the 1950s and 1960s. Casares played college football for the University of Florida, where he was standout fullback and kicker. Casares played professionally for the Chicago Bears and Washington Redskins of the NFL, and was a member of the expansion Miami Dolphins of the AFL.

Jack Conners is an American Democratic Party politician who served in the New Jersey General Assembly, where he represented the 7th Legislative District from 1998 until his resignation in 2011.

Eustace Preparatory School is a Catholic coeducational private high school in Pennsauken Township, New Jersey, which was founded in 1954 by the priests and brothers of the Society of the Catholic Apostolate. The school operates under the auspices of the Roman Catholic Diocese of Camden, was named after Bishop Bartholomew J. Eustace, first bishop of the diocese. The school is a coeducational institution serving students in ninth through twelfth grades. The school has been accredited by the Middle States Association of Colleges and Schools Commission on Elementary and Secondary Schools since 1977.

Shaun Grigg is a former professional Australian rules footballer who played 171 games for Richmond and 43 games for Carlton over a 13 year AFL career. He was a premiership player with Richmond in 2017, an Under 18 All Australian and twice placed in the top five in Richmond club best and fairests.

Passaic High School is a four-year community public high school, serving students in ninth through twelfth grades from Passaic, in Passaic County, New Jersey, United States, operating as part of the Passaic City School District. The school has been accredited by the Middle States Association of Colleges and Schools Commission on Elementary and Secondary Schools since 1927.

Delia Parr is a pen name for the historical fiction author Mary Lechleidner. 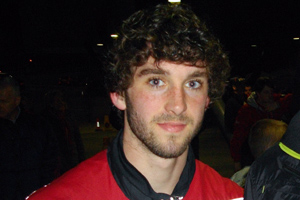 William Donald Grigg is a professional footballer who plays as a striker for League One club Sunderland and the Northern Ireland national team.

Gregory S. Mark is a former American football defensive end and linebacker in the National Football League. He was drafted by the New York Giants in the third round of the 1990 NFL Draft. He played college football at Miami. Mark played in the NFL for the Philadelphia Eagles and Miami Dolphins. Mark was a defensive line coach for the Hurricanes from 1996-2005.

Trayvon Benjamin Martin was a 17-year-old African American from Miami Gardens, Florida, who was fatally shot in Sanford, Florida by George Zimmerman, a 28-year-old Hispanic American. Martin had gone with his father on a visit to his father's fiancée at her townhouse at The Retreat at Twin Lakes in Sanford. On the evening of February 26, Martin was walking back to the fiancée's house from a nearby convenience store. Zimmerman, a member of the community watch, saw Martin and reported him to the Sanford Police as suspicious. Several minutes later, there was an altercation and Zimmerman fatally shot Martin in the chest.