He made 78 known first-class appearances [1] and was mainly associated with Hampshire when its teams were organised by the Hambledon Club. As well as playing for Hampshire,Harris appeared for a number of other teams including Berkshire,Kent,Surrey,Marylebone Cricket Club and several invitation XIs. [2]

Noted for his fast and accurate bowling,Harris was a right arm fast underarm bowler and a left-handed batsman.

Harris' first recorded game for Hampshire was against Kent in July 1782. [5] Although he was never noted as a batsman,Harris made the top score of 27 in Hampshire's first innings,in which they were dismissed for 87. [5] Harris played three times for Hampshire in the 1783 season,twice against Kent and once against All-England. He took nine wickets in these matches. [6]

Harris is only recorded once in 1784 when he again played for Odiham in a minor match. In 1785,when few first-class matches took place,Harris played for Berkshire against Essex. [7]

On 13 July 1776,Harris had his best known performance to date when he took four 1st innings wickets for Hampshire v. Kent at Windmill Down,Hampshire winning the game by 1 wicket. This was the match in which Tom Sueter was given out hit the ball twice,the earliest recorded instance of this form of dismissal. [8] On 8–12 August of the same year,Harris played for the White Conduit Club against Kent at Bourne Paddock and took six wickets in the match,three in each innings,to help White Conduit to a 164 run victory. White Conduit's big win was due to Tom Walker and Tom Taylor becoming the first players known to score a century in the same innings. Walker made 95* and 102,just missing the honour of becoming the first player to score two centuries in a match. [9]

By now,Harris' reputation was well established and he played regularly in major matches into the 1790s. He was a frequent taker of wickets and again took ten in a match on 30–31 August 1790 when he guided Hampshire to a 10-wicket win against All-England at Lord's Old Ground. [11] On 15–17 August 1792,Harris had the best known return of his career when he took 11 wickets in the match for Hampshire against Kent at Cobham Park,including eight in the first innings. Hampshire won by 8 wickets. [12]

His later career was ruined by attacks of gout and Harris played his final match on 13–15 August 1798 for All-England v. Surrey at Lord's Old Ground. He took five wickets in the 1st innings and his last,subject to the batting order,was when he bowled W Wells for 5. He scored 0* in his final innings and his team won the match by an innings and 1 run. [13] He died 19 May 1803,Crookham Village,Hampshire

In taking my place at the wicket, I almost felt as if taking my ground in a duel... and my terrors were so much increased by the mock pity and sympathy of Hammond, Beldham, and others round the wicket, that when this mighty bowler, this Jupiter tonas, hurled his bolt at me, I shut my eyes in the intensity of my panic, and mechanically gave a random desperate blow, which, to my utter astonishment, was followed by a loud cry all over the ring of 'run, run'. – Playwright Lord Frederick Reynolds on facing Harris. [14]

Harris was highly rated by his contemporaries, especially John Nyren, who called him "the very best bowler; a bowler who, between any one and himself, comparison must fail". [15]

Nyren described Harris' style and technique in some detail. Harris began from an erect stance "like a soldier at drill" and raised the ball to his forehead before stepping forward. In his delivery stride, he brought the ball from under his arm "by a twist" and nearly as high as his armpit. With this action he would "push it, as it were, from him". Nyren says the speed of the delivery was "extraordinary" and that he could not understand how Harris managed to achieve such speed. [16]

Some line drawings of Harris and other players of the 1790s have survived. [17] Harris is shown in the characteristic pose described by Nyren as he began his action, standing erect with the ball raised over his head. [16] The ball when delivered was pitched very fast and accurately. Harris seems to have got "pace off the pitch" and Nyren has recorded that numerous batsmen received nasty injuries to their unprotected hands from balls that trapped their (ungloved) fingers against the bat handle. [18]

Like Thomas Boxall and the brothers Tom and Harry Walker, Harris used to practice his bowling in a barn during the winter. [19]

Harris was born at Elvetham but moved when still a child to Crookham (now known as Crookham Village), where he lived for the rest of his life. [20] He never married and was a potter by trade. [15] [20]

Nyren, who knew Harris personally, described him as "a muscular, bony man, standing about five feet 9½ inches". [15] Nyren remarked on Harris' personality and looks by saying he had "a remarkably kind and gentle expression" and an "honest face". [15] Harris, said Nyren, was "a man of so strict a principle" and "such high honour". [16]

Harris suffered from gout in his later years and the sources have recorded how he would arrive at a game on crutches and then sit on a chair between deliveries. [20] He was unable to play after 1798 and "latterly, in fact, was quite a cripple". [20] He died in 1803 at Crookham and was buried at nearby Crondall, though no tombstone was erected. [20]

Broadhalfpenny Down is a historic cricket ground in Hambledon, Hampshire. It is known as the "Cradle of Cricket" because it was the home venue in the 18th century of the Hambledon Club, but cricket predated the club and ground by at least two centuries. The club is in the parish of Hambledon close to the neighbouring parish of Clanfield. The club took the name of the neighbouring rural village of Hambledon, about 2.7 miles away by road. 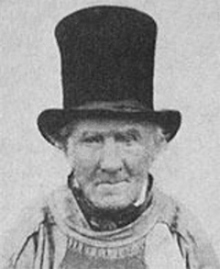 John Frame was an English cricketer who played during the second half of the 18th century. He was described as one of the "most famous bowler[s] of his day" and as a bowler of "great renown".

John Wood was an English cricketer who played for Kent. His career began in the 1760s before first-class statistics began to be recorded and his known first-class career spans the 1772 to 1783 seasons.

James Aylward was a noted English cricketer who played for the Hambledon Club. He was a left-handed batsman.

John "Little Joey" Ring was an English cricketer who played for Kent.

Addington Cricket Club fielded one of the strongest cricket teams in England from about the 1743 season to the 1752 season although the village of Addington is a very small place in Surrey about three miles south-east of Croydon. The team was of county strength and featured the noted players Tom Faulkner, Joe Harris, John Harris, George Jackson and Durling. The team immediately accepted the Slindon Challenge, in 1744, to play against any parish in England. The only other club to accept was Robert Colchin's Bromley.

Samuel (Sam) Colchin was an English cricketer who played for Kent in the 1760s and 1770s. He was also selected for All-England in major matches and was often a given man. He was an all-rounder though noted mainly as a bowler, but of unknown type and pace. He was a nephew of Robert Colchin.

Thomas Scott was an English cricketer who played for Hampshire at the time of the Hambledon Club. He was a specialist batsman who may have been a regular opener, but it is not known if he was right or left-handed.

The Cricketers of My Time is a memoir of cricket, nominally written by the former Hambledon cricketer John Nyren about the players of the late 18th century, most of whom he knew personally. Nyren, who had no recognised literary skill, collaborated with the eminent Shakespearean scholar Charles Cowden Clarke to produce his work. It is believed that Cowden Clarke recorded Nyren's verbal reminiscences and so "ghosted" the text.

The period from 1772 to 1815 saw significant growth and development in English cricket to the point that it became a popular sport nationwide, having outgrown its origin in the southeastern counties. Prominent northern clubs were founded at Nottingham and Sheffield. The earliest known references have been found for cricket in Australia (1804), Canada (1785), South Africa (1808) and the West Indies. In India, British clubs were founded at Calcutta (1792) and, following the siege there, Seringapatam (1799). In America, the game was popular among soldiers in the revolution and George Washington is known to have played in at least one game.