David Ison, son of Richard Lea Ison, was educated at the University of Leicester (BA 1976), the University of Nottingham (BA 1978) and St John's College, Nottingham (Diploma of Biblical Studies 1979). He undertook further studies in church history at King's College London where his 1984 PhD was entitled "The Constantinian Oration to the saints : authorship and background". [2]

Ison was ordained as a priest in 1980. [3] He began his ordained ministry as a curate at St Nicholas and St Luke's Deptford. From 1985 to 1988 he was a tutor at the Church Army Training College before being appointed vicar of St Philip's Potters Green in the West Midlands until 1993. Later, he was the officer for Continuing Ministerial Education in the Diocese of Exeter.

Ison became Dean of Bradford in September 2005. [4] [5] On 6 March 2012, it was announced that he was to become the next Dean of St Paul's Cathedral from 25 May 2012, succeeding Graeme Knowles, [6] [7] which he did by Letters Patent dated 11 May 2012 granting him "the Deanery of Her Majesty’s Cathedral Church of St Paul in London". [8] On 5 June 2012, Ison led the prayers at the service of thanksgiving marking the Diamond Jubilee of Queen Elizabeth II. The next year, he gave the bidding at the funeral of Margaret Thatcher. [9]

Ison is an open evangelical and supports same-sex partnerships. [11]

Ison has an identical twin brother, Keith Ison, who was the Head of Medical Physics at Guy's and St Thomas' NHS Foundation Trust and is a past president of the Institute of Physics and Engineering in Medicine.

The Diocese of Ballarat is a diocese of the Anglican Church of Australia, which was created out of the Diocese of Melbourne in 1875. It is situated in the Ballarat region of the state of Victoria, Australia and covers the south-west region of the state. The diocesan cathedral is the Cathedral of Christ the King in Ballarat. Garry Weatherill, formerly the Bishop of Willochra between 2000 and 2011, was installed as the 10th Bishop of Ballarat on 5 November 2011.

Humphrey Ivo John Southern is a British Anglican bishop. From 2007 to 2015, he was Bishop of Repton, a suffragan bishop in the Diocese of Derby. In April 2015 he was appointed Principal of Ripon College Cuddesdon, an Anglican theological college. 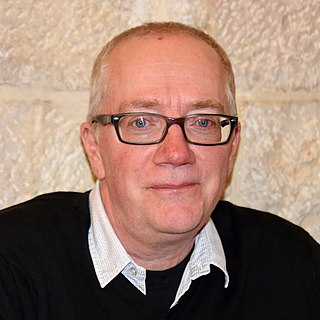 Jonathan Dunnett Clark is a retired Anglican bishop serving as the Bishop for the Falkland Islands. He was previously area Bishop of Croydon in the Church of England Diocese of Southwark, 2012–2022. An Anglo-Catholic, he was rector general of the Society of Catholic Priests from 2005 to 2008 and chair of Affirming Catholicism from 2008 to 2012

Jost Andreas Loewe is a German-born priest in the Anglican Church of Australia. He has served as the 15th Dean of Melbourne since 2012, the second-youngest dean in the history of the diocese. 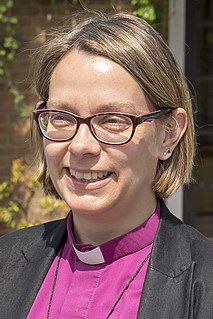 Helen-Ann Macleod Hartley is a British Anglican bishop and academic. She has been the Bishop of Ripon in the Church of England, an area bishop of the Diocese of Leeds, since 2018; and the Bishop-designate of Newcastle since 2022. She previously served as Bishop of Waikato in New Zealand from 2014 to 2017. She was the first woman to have trained as a priest in the Church of England to join the episcopate, and the third woman to become a bishop of the Anglican Church in Aotearoa, New Zealand and Polynesia.

David Robert Malvern Monteith is a Northern Irish Anglican priest in the Church of England and is Dean-designate of Canterbury Cathedral. He is currently the Dean of Leicester since his appointment in May 2013.

John Harverd Davies is a British Anglican priest and theologian. Since 2016, he has been the Dean of Wells, the priest first-among-equals at Wells Cathedral and the most senior priest in the Diocese of Bath and Wells. He previously served as Dean of Derby since 2010.

Simon David Heathfield is a British Anglican priest. Since November 2014, he has been the Archdeacon of Aston in the Church of England.

Amanda Kirstine Ford is a British Anglican priest who has served as Dean of Bristol since 3 October 2020.