David Kramer (born 27 June 1951) is a South African singer, songwriter, playwright and director, notable for his musicals about the Cape Coloured communities, and for his early opposition to apartheid.

Kramer was born in Worcester, South Africa, to a furniture merchant and a hairdresser and spent his formative years in Worcester. His brother, John Kramer, became an artist known for his oil-on-canvas portrayal of cafés, stores, and houses standing in the sharp sunlight of sleepy towns. [1] The family's maiden name was initially Karabelnik; however, it was later changed to Kramer by his grandfather, who arrived in South Africa from Lithuania in 1899 and made a living as a salesman (walking from farm to farm selling goods). [2]

During Kramer's stay in Worcester, he had some music lessons with the classical composer Cromwell Everson. He played in a South African band called The Creeps in the 1960s and then traveled to England in 1971 to study textile design at Leeds University on a bursary.

He began his music career in the mid-1970s, singing at folk clubs and campus concerts in South Africa. David pioneered the use of Cape Afrikaans and South African English in his lyrics, often using both languages in the same song. He focused on small-town South Africa and employed gritty realism and dark satire to tell his stories and describe his characters.

In his stage performances, he portrayed himself as a rural everyman who traveled the dusty roads of small-town South Africa with an old bicycle and a cheap guitar. He sang in the Boland patois of his youth, told stories, and sang songs in both languages.

Mountain Records issued his first six albums. The first album BAKGAT!, was released in 1980 and was immediately banned in its entirety by the SABC because it was considered too political and vulgar for the South African ear. Despite initial setbacks, the album received 11 gold and one platinum record for sales. [3]

Notable singles from the album were Blokkies Joubert and Die Royal Hotel. Both sat at the top of the charts on various South African Radio stations. The album reached number 11 on the South African LP charts.

His only other singles of notoriety were Stoksielalleen from the Kwaai album; however, he did chart with Delicious Monster, Hanepootpad, and Kwaai on the album's charts. All 6 of his albums released on the Mountain label earned a gold or platinum status.

In 1983, David licensed his idiosyncratic image to Volkswagen South Africa to use on their Microbus (called a "Kombi"). This was the beginning of a television and print campaign that won the hearts of South Africans. The campaign made David Kramer into a household name and was to continue for the next thirteen years - probably the longest-running celebrity endorsement this country has seen. With his trademark red veldskoen shoes, bicycle and guitar, he became a household name as the face of the SA Volkswagen Microbus advertisements.

Kramer and Taliep Petersen first met in the mid-'70s at a folk concert staged by Des and Dawn Lindberg at the University of Cape Town. In 1986 he collaborated with Petersen on the highly acclaimed stage musical District Six, a politically influenced musical telling the story of the people of District Six in Cape Town, South Africa, that were forcibly removed from the area during apartheid. It was produced by the Baxter Theatre and his wife, Renaye Kramer, opened in April 1987.

With Petersen, he created Fairyland, Poison, and Kat & the Kings, all to critical acclaim, the latter having successful runs on Broadway and in London's West End.

His enduring friendship with Taliep led to a working relationship based on mutual respect until Taliep's murder in 2006. As a tribute to his long partnership with Petersen and to honor his memory, a Kramer Petersen Songbook production was staged at the Baxter Theatre and ran to sold-out houses from the first performance. [4]

In December 2007, Kramer was awarded an Honorary Doctorate in Literature (Honoris Causa) by the University of Cape Town. [3]

In 2001, Kramer launched a show called Karoo Kitaar Blues, presenting the eccentric guitar styles of the Karoo - the unique finger-picking and tunings of marginalized people who live in remote villages and outposts of the semi-desert areas of South Africa. The show's quasi-documentary aimed to tell the story and document a long forgotten and almost lost part of South Africa's musical heritage and features unknown musicians and instruments from the Northern Cape hinterland.

As a direct result, one of these "forgotten" artists, Hannes Coetzee, became an overnight YouTube sensation, [5] and was invited to participate in a teaching workshop for Slide and Steel Guitar in Port Townsend, WA.

John Maxwell Coetzee is a South African–Australian novelist, essayist, linguist, translator and recipient of the 2003 Nobel Prize in Literature. He is one of the most critically acclaimed and decorated authors in the English language. He has won the Booker Prize (twice), the CNA Prize (thrice), the Jerusalem Prize, the Prix Femina étranger, and The Irish Times International Fiction Prize, and holds a number of other awards and honorary doctorates.

Paarl is a town with 112,045 inhabitants in the Western Cape province of South Africa. It is the third-oldest city and European settlement in the Republic of South Africa and the largest town in the Cape Winelands. Due to the growth of the Mbekweni township, it is now a de facto urban unit with Wellington. It is situated about 60 kilometres (37 mi) northeast of Cape Town in the Western Cape Province and is known for its scenic environment and viticulture and fruit-growing heritage.

The Karoo is a semi-desert natural region of South Africa. No exact definition of what constitutes the Karoo is available, so its extent is also not precisely defined. The Karoo is partly defined by its topography, geology and climate, and above all, its low rainfall, arid air, cloudless skies, and extremes of heat and cold. The Karoo also hosted a well-preserved ecosystem hundreds of million years ago which is now represented by many fossils. 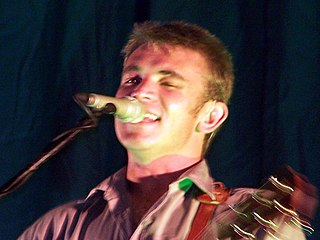 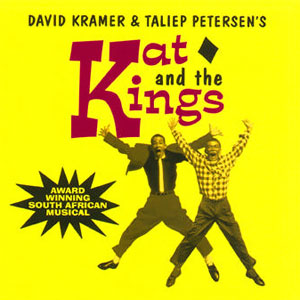 Natalia Da Rocha is a South African actress, director, youth activist and businesswoman. She can be remembered as being one of the few persons of colour to appear in entertainment media during the Apartheid-era. In 1981 she was the first Coloured to graduate with a Drama degree from the Afrikaans dominant Stellenbosch University. Beginning 1987 she was the first woman of colour along with Sam Marais to star in a Sun City Extravaganza. In 1992, she became the first South African star to perform publicly in Madagascar. She is well remembered for her roles in musicals such as Ain't Misbehavin'; Midnight Blues; Godspell and Vere . Natalia was one of 40 inducted into the S.A. Legends Museum on 26 January 2020 in Johannesburg.

Breede River Valley is a region of Western Cape Province, South Africa known for being the largest fruit and wine producing valley in the Western Cape, as well as South Africa's leading race-horse breeding area. It is part of the Boland bordering on becoming Little Karoo towards the east.

William Duncan Baxter was a businessman, politician, and the Mayor of Cape Town, South Africa, from 1907 to 1908. The theatre, generally known as "The Baxter", a performing arts complex in Rondebosch, a suburb of Cape Town, was named in his honour.

Loxton is a town in the Karoo region of South Africa's Northern Cape province. Within the Ubuntu Local Municipality of the Pixley ka Seme District Municipality

Hazel Gertrude Jenkins is a South African politician and former Premier of the Northern Cape province. She served as Premier from May 2009 until she officially stood down in April 2013, following a stroke. The motion to recognise her stepping down as Premier was defeated in a vote by the legislature on 30 April 2013 so that technically Jenkins remained Premier. Hence Sylvia Lucas was sworn in on 30 April not as Jenkins' successor but as Acting Premier. Jenkins subsequently resigned, as of 22 May 2013, paving the way for Lucas to be sworn in as her successoron 23 May 2013.

Daniël Cornelis Boonzaier, more commonly known as D.C. Boonzaier, was a South African cartoonist. He was famous for his caricatures of Cape politicians and celebrities at the turn of the century, and later for his anti-capitalist and anti-imperialist cartoons for Die Burger. He fathered the artist Gregoire Boonzaier.

Riaad Moosa is a South African comedian, actor and doctor. 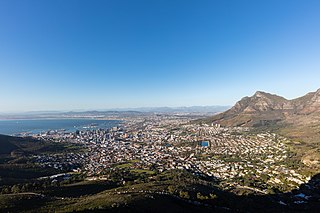 The following outline is provided as an overview of and topical guide to Cape Town: